Argentinean integrated energy company YPF (NYSE:YPF) is in the midst of a lot of uncertainty, since macroeconomic volatility in Argentina and government ownership are important risk factors for investors in the company. On the other hand, YPF also offers substantial upside potential from current levels if things work out well. Let's look at YPF stock and examine three reasons it could rise materially in the coming years.

Solid financial performance
YPF was renationalized from Spanish Repsol in April 2012, and the Argentinean government now owns 51% of the company. Keeping in mind that the Cristina Kirchner administration has applied populist economic policies across the board, investors have valid reasons to monitor YPF and its ability to operate profitably in the current political context.

In addition, the Argentinean economy is facing serious difficulties. The country defaulted on part of its sovereign debt obligations on July 31 because of a long-standing legal dispute with some of its creditors. Economic activity is contracting, and inflation is off the charts, in the area of 40% per year according to estimates by private-sector economists.

However, none of this has stopped YPF from generating solid financial performance over the past several quarters. The combination of growing production levels and prices rising faster than costs has allowed YPF to deliver expanding profit margins when measured in U.S. dollar terms.

In July of last year, the Kirchner administration signed tax exemptions and other special benefits for international companies willing to invest more than $1 billion in the Argentinean energy sector. Immediately after that, a $1.24 billion joint venture between YPF and Chevron was made official to develop the Vaca Muerta formation.

Argentinean authorities seem to understand that they need to avoid excessive government intervention to attract international investors and develop the country's promising shale oil and gas reserves. As long as that continues being the case, YPF should continue delivering solid financial performance for shareholders.

Abundant growth prospects
According to the U.S. Energy Information Administration, Argentina has one of the largest shale gas and oil reserves on the planet in its Vaca Muerta formation, with 802 trillion cubic feet of technically recoverable gas and 27 billion barrels of technically recoverable oil. Based on these estimates, Vaca Muerta is the fourth largest shale oil reserve in the world, and it comes in second place behind China in shale gas. 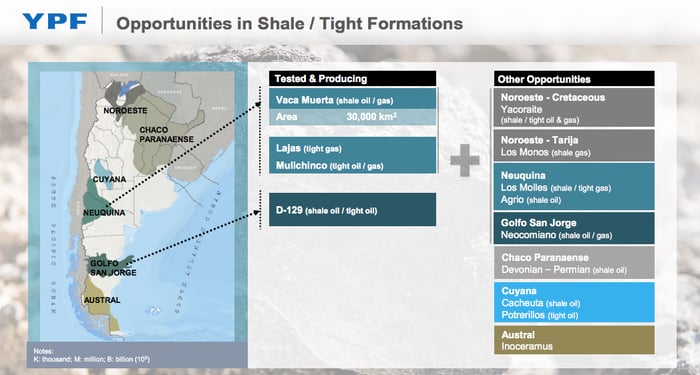 I am very excited with this discovery that proves that Vaca Muerta and Chubut's D-129 formation aren't the only shale deposits we have to exploit in Argentina. The tests are very promising but still it is too soon to provide figures.

It looks like Argentina is home to some very promising shale oil and gas reserves, and YPF is in a privileged position to profit from these opportunities in the years ahead.

Changing political landscape
Shares of YPF have risen by more than 93% over the past year. While healthy financial performance and exciting growth prospects are arguably responsible for this impressive performance to some degree, investors should notice that YPF is not the only Argentinean stock delivering huge gains lately.

In spite of considerable economic hurdles, Argentina's benchmark Merval index has risen by a whopping 43% in the first eight months of 2014 when measured in U.S. dollar terms.

One important reason for optimism regarding stocks in Argentina is the October 2015 presidential elections. President Kirchner is not allowed to run again, and all of the leading candidates, even from the governing Peronist party, are believed to be considerably more market-friendly.

If Argentina takes a more market-oriented direction in the coming years, this would clearly provide increased certainty for investors in YPF -- not only when it comes to the company's management, but also in terms of Argentina's overall economic and energy development policies.

Key takeaway
Being exposed to considerable economic and political risks, YPF is certainly not for the faint of heart. That being said, solid financial performance, huge opportunities for growth, and the possibility of a changing political landscape in Argentina are three important reasons the stock could offer substantial upside potential for investors.