Something I find fascinating about finance is how little agreement there is between equally smart people.

Other than politics, there are few other fields where experts can be so far apart about basic concepts. All physicists agree on gravity. All mathematicians agree on the quadratic formula. But smart finance people can be miles apart about fundamental issues, like whether stocks are cheap or in a bubble.

One reason finance is a breeding ground for disagreement is because everyone gets their own version of history based on their own unique life experiences. And since markets are so volatile – booms and busts can last for years on end -- there's a lot of variability in those experiences depending on what year you were born.

Take how stocks performed when you were age 13 to 29. Depending on what year you were born, your experience varied by an order of magnitude (these charts are adjusted for both dividends and inflation): 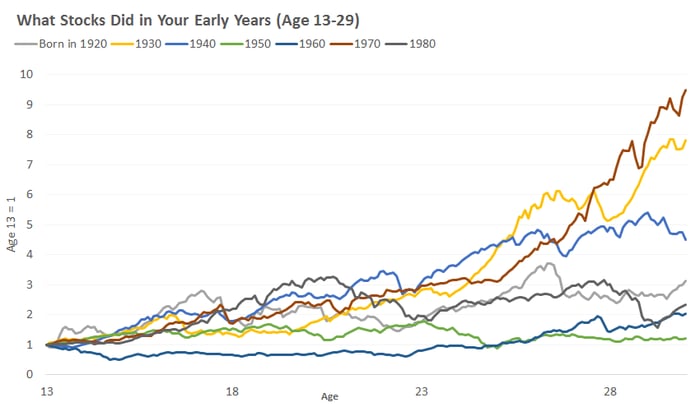 There's also a huge variance in experiences during your working years depending on when you were born: 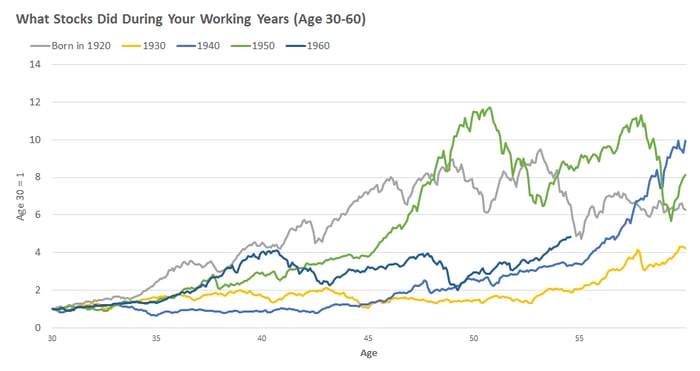 From age 30 to 50, those born in 1930 got no return out of stocks. Those born in 1950 saw stocks rise twelvefold. These are not small differences. They implanted a completely different view on what markets are capable of.

This was the same 1950s cohort that saw stocks go nowhere during their early years, so they were skeptical of the stock rally until it had gone on for years and was nearing an end. The 1930s cohort saw stocks boom during their teens and 20s, leading to the 1960s stock bubble that inflated confidence just in time for a two-decade bear market.

In both cases, stocks probably did something during your working years that your youth taught you was unlikely to occur. That made you -- and everyone else -- confused, disoriented, argumentative, and skeptical. And that's why there's so much disagreement in finance.

There's also a big range of outcomes in stock performance during retirement years: 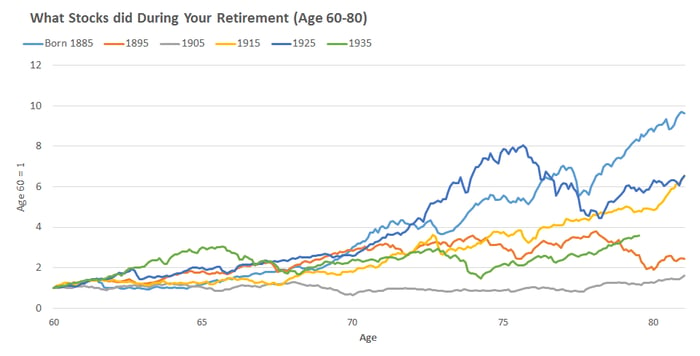 You can imagine someone born in 1885 talking about the glorious, glorious benefits of owning stocks during retirement. Or someone born in 1905 wishing they had stuck to bonds, which earned a higher return with less volatility during their own retirement.

You can also imagine these two people going on TV to argue their respective positions. But they're not really arguing – they're just rehashing their unique life experience, which came from the random chance of when they were born.

Finance is a strange subject because there are no firm rules that work all the time. This might have worked for the last two decades. That might work for the next two. But it's always changing. And since things are always changing, some people will stubbornly attach to old beliefs while others look silly as they discover new ones.

Max Planck once said, "New scientific truth does not triumph by convincing its opponents and making them see the light, but rather because its opponents eventually die, and a new generation grows up that is familiar with it." That's also a pretty good definition of how finance works.

Why Finance Breeds So Much Disagreement @themotleyfool #stocks Next Article
Current