Losses in the second quarter widened to $573 million from $194 million in the year-ago period. With just over $1 billion in cash and equivalents at the end of the quarter, and chewing through $715 million in net cash from operating activities over the first six months -- along with another $116 million in spending on capital assets -- means it was burning through cash at a rate of almost $140 million a month.

Sears apparently has money to burn. Or not. Image: TaxRebate.org.uk.

Money for nothing
At that rate, Sears would run out of money in less than eight months. It was that feeding of greenbacks into the fire without any water in the form of growing sales to quench the flames that caused Fitch Ratings to downgrade the retailer's credit from double-C to triple-C, or putting it about as low as it can go.

It's obvious Sears needs money, particularly as it heads into the Christmas season, not only to allay the worries of vendors that they'll get paid, but simply to keep the lights on in the building.

CEO Eddie Lampert generated around $665 million in additional liquidity this year from spinning off Lands' End (NASDAQ:LE) and selling off some real estate, but with year-to-date losses closing in on almost $1 billion, it was clear he was going to need to raise cash.

The short end of the stick
Earlier this year, Lampert ended the practice of loaning Sears Holding money on a short-term basis from his ESL Investment hedge fund, a practice that had been in effect since 2010. It was speculated that by pulling in the reins as he was on the program, Lampert was reducing his exposure to the retailer, a potential red flag, or that he had to cover withdrawals from ESL, something that he's had to do in the past.

Out of the frying pan, into the fire
Now Lampert is loaning Sears money again, or rather ESL Investments is, and though it means he's once again increasing his exposure to his company, it's not necessarily a positive development.

In a filing with the SEC yesterday, Sears said it was borrowing from ESL $400 million in the form of a short-term loan secured by a first priority lien on 25 of its properties that was to be repaid by Dec. 1, though maturity could be extended out to Feb. 28, 2015 if it didn't default. One half of the loan is immediately available, the other half at the end of the month.

Revenues last quarter tumbled 10%, and while that was due in part to the Lands' End spinoff and closing stores, comparable sales fell yet again as Kmart dragged down the whole even as they were barely positive at Sears' namesake stores. 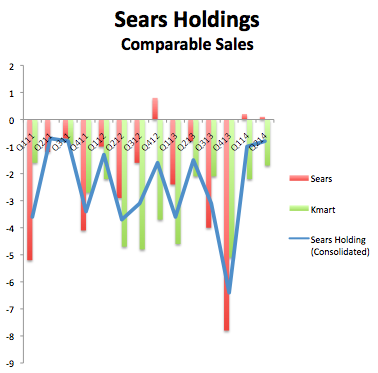 Christmas is key for any retailer, let alone one like Sears that needs to generate as much sales as possible to keeping the engine going. It's a cash-intensive period, too, where retailers need to keep suppliers assured they'll get paid for their product.

Sales are the key
Last year, when the future of J.C. Penney (OTC:JCPN.Q) was still very much in doubt, a ruckus was raised when it was suggested one of its lenders was no longer financing deliveries to its stores from vendors as it headed into the start of the holiday season. It also had to quash rumors it was in bankruptcy talks and was having its financing cut off.

Unlike Sears, which has Lampert's deep pockets to turn to, Penney had to survive by showing better results. Its ailing rival has been unable to do that, and its CEO having to bail it out financially suggests the going is getting rougher still.

It may spin the loan as a "predictable source of lending," which is true, and it will get through yet another Christmas season, but there is just no growth left in this company, and it's dwindling away to nothing.

A future no one wants
Expect more assets to be unwound from its operations until the only thing left are its aging, empty stores. Some investors have looked to those properties as a store of wealth, and that may ultimately be all they are left holding.