With the battle between hedge fund investor Starboard Value and Darden Restaurants (NYSE:DRI) about the selling of Red Lobster behind them, both are now contesting how best to turn around Olive Garden, the biggest Italian food chain in the country, but one that's suffered almost as badly as the seafood chain.

When you're here you're family. A dysfunctional family, but family nonetheless. Image: Olive Garden

Despite promises by Starboard of a nasty proxy fight at the annual shareholders meeting, Darden's management has largely ignored the prescriptions the investor's offered and has chosen instead to plow ahead with a revamp of its own that includes new signage, updated interiors, and new marketing campaigns like its recently unveiled all-you-can-eat pasta promotion.

Whether any of it will succeed is debatable. Traffic at Olive Garden has been negative for nine straight months (and 15 of the last 16), and while same restaurant sales finally broke positive for the first time since last year, that's simply a result of higher prices. Customers are still staying away. 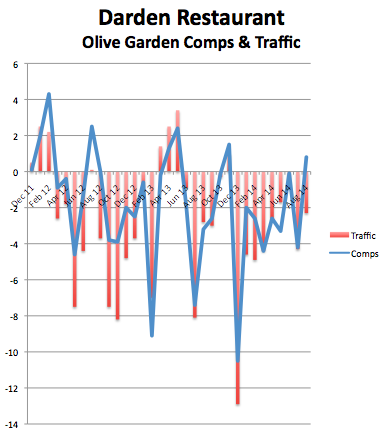 It hasn't been bumper-to-bumper traffic at Olive Garden for over a year. Data: Darden Restaurants quarterly SEC filings

All in the family
And it's not just Olive Garden that's lagging, but all Italian restaurants generally. Bloomin' Brands' (NASDAQ:BLMN) Carrabba's Italian Grill and Ignite Restaurant Group's (NASDAQ: IRG) Romano's Macaroni Grill are also suffering from weak traffic and comps -- and really, it's only been Maggiano's Little Italy from Brinker International (NYSE:EAT) that's managed to consistently attract customers.

A combination of intense competition, a sluggish economy, and heightened concern about healthful eating seems to be conspiring against Olive Garden and the others, and was the reason why Starboard Value's arguments for focusing management's attention on the chain to the exclusion of everything else seemed to carry weight.

Only now the hedge fund seems to be lost in the weeds of wanting to run the restaurant itself.

Oh, it still wants to create a real estate investment trust and spin off the specialty restaurant group that includes concepts like Yard House, Capital Grille, and Bahama Breeze, but it also wants to make sure Olive Garden salts the water before cooking its pasta and doesn't put too many breadsticks on the table. For all the good advice it's given, Starboard Value appears to have lost sight of the forest for the trees.

A cure for what ails you
In a near-300-page report released last week, Starboard issued a manifesto titled "Transforming Darden Restaurants" that expands upon many of the ideas it previously offered. While it continues to advocate management focusing on growth opportunities like Longhorn Steakhouse, it also revels -- perhaps a little too deeply -- in the minutiae of what it will take to turn Olive Garden around.

Not only is it versed in what Darden's real estate portfolio may be worth now without Red Lobster (about $2 billion to $3 billion) it also has time to critique the restaurant's breadstick policy.

Currently waiters are supposed to set one breadstick for each person at a table, plus one more for the table, but Starboard claims that's not adhered stringently and instead allows for unlimited breadsticks, which leads to waste. It maintains some 675 million to 700 million breadsticks are served each year, and if Olive Garden reined in handing out so many of them it could save $4 million to $5 million annually.

Along with endless breadsticks, endless salads are another wasteful measure at the chain, and staff is drenching them in too much dressing, leading to more waste and a diminution of the customer experience.

It's also not pushing alcoholic beverages enough either, and Starboard says Olive Garden has one of the lowest alcoholic beverage sales as a percentage of revenues in the industry -- lower than even it's own historical averages. 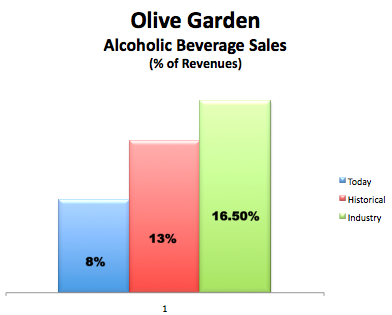 Salt of the earth
Worse, Starboard says Olive Garden no longer salts its water before cooking pasta, which it contends management did to extend the warranty on its pots. It charges that leads to degraded food quality and the hedge fund points to consumer surveys that say the Italian restaurant's pasta ranks worst when it comes to it being bland, dry, or overcooked.

All of the points made in the treatise show Starboard has been doing its homework. It also indicates the hedge fund may be getting lost in the weeds of running the business and wanting to micromanage the chain.

Certainly, if the management team has destroyed as much value as Starboard contends -- and there's a good argument to be made that it has -- a certain amount of hands-on help is going to be needed.

But when an investor presentation is counting the number of breadsticks and whether or not there's salt in the pasta water, it may indicate a level of intrusion into operations that could make the cure as deadly as the illness.

All aboard for change
Starboard Value's program for effecting a real estate transaction before any other course of action is undertaken makes a lot of sense, and creating a separate entity for the high-growth specialty restaurants has some merit.

Yet the old saying too many cooks ruins the soup also holds true and with so many hands wanting to hold the pasta ladle, there just may be no saving Olive Garden at this point.