If I had to place my bets I'd suggest that Sarepta Therapeutics' (NASDAQ:SRPT) shareholders must love rollercoasters, because it's been nothing but a wild ride for the clinical-stage biopharmaceutical company over the trailing year. Though shares have risen a welcome 17% in 2014, as you can see below, at one point last year in a matter of weeks Sarepta lost around 80% of its value. 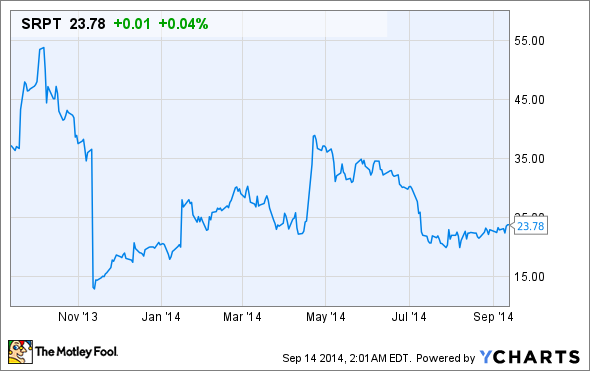 This volatility in Sarepta's stock might have you wondering what's been causing these wild moves. Today we'll answer that question as well as look at where Sarepta shares could head next.

A quick trip down memory lane

Before we can fully understand why Sarepta shares have motored higher in 2014, we have to take a quick trip down memory lane as to why its shares initially rose to as high as $55 per share, and why they plummeted as low as $12, all within the course of a few weeks.

Sarepta's story revolves around its clinical and preclinical research of drugs designed to treat Duchenne muscular dystrophy, or DMD, a progressive genetic muscular disease that afflicts boys and to which has no cure. Sarepta's most advanced clinical-stage therapy is eteplirsen, a therapy which the company has completed a number of phase 2 follow-up studies in a small subset of patients.

As you might have guessed by Sarepta's run to nearly $56, the data on eteplirsen has been intriguing. In July the company reported that those patients which had been given eteplirsen from the start of the phase 2 study had experienced a decline in the six-minute-walk-test (6MWT) of 33.2 meters, or 8.5%, through week 144, resulting in a treatment benefit of 75.1 meters. Even patients that were originally in the control group and were subsequently switched over the eteplirsen continue to show 6MWT stabilization from their initial drop-off from baseline.

However, what caused Sarepta to nosedive late last year were two key events. First, the company's prime competitor Prosensa (NASDAQ: RNA) and GlaxoSmithKline (NYSE:GSK), saw their late-stage DMD drug, drisapersen, which works by a similar exon-skipping mechanism as eteplirsen, fail miserably in clinical studies. The drug is still being studied as a potential treatment for early stage DMD, but Glaxo has given up its licensing rights to drisapersen and returned them to Prosensa. In other words, strike one was the failure of a drug that worked along a very similar pathway.

Secondly, Sarepta shareholders had been counting on the Food and Drug Administration being willing to give eteplirsen a shot at approval based on its phase 2 data. In November, though, the FDA questioned whether or not dystrophin can be used as a viable endpoint to suggest the efficacy of eteplirsen and suggesting that Sarepta run a more inclusive phase 3 trial. The recent failure of drisapersen to meet its primary endpoint also weighed on the FDA's comments. Long story short, Sarepta shares tumbled.

Why Sarepta shares have gained in 2014
Now that our brief recap is out of the way, we can get into the meat and potatoes of why Sarepta continues to be whipsawed, but why it's ultimately up 17% in 2014.

The big event that changed the company's fortune occurred in April when Sarepta announced that the FDA had modestly changed its tune and provided a quicker pathway to approval for eteplirsen as long as Sarepta conducted additional open-label confirmatory studies on a larger patient pool. In addition, the FDA gave Sarepta guidance on additional exon-skipping drugs that it hopes to begin clinical trials on soon. Because of the FDA's change of heart Sarepta will be able to submit a rolling application before the end of the year and use prior phase 2 data as well as ongoing open-label data to hopefully be the first true DMD drug approved (eteplirsen specifically skips exon 51, which equates to about 13% of all DMD cases). Not to mention, a rolling approval could give Sarepta the opportunity to generate revenue more quickly, which would stem a lot of skeptics' current cash burn concerns.

Shares spiked on the news but have since given back most of their gains considering that catalysts are few and far between for Sarepta.

Keep this in mind
Of course, investors would be wise to hold the fact that Sarepta's pipeline is almost exclusively geared toward treating DMD. At the moment none of the company's other exon-skipping DMD drugs are even in human trials, and its infectious disease portfolio is primarily in the discovery stage or in early stage clinical studies. Long story short, a failure of eteplirsen could wipe out a significant amount of Sarepta's current value.

Shareholders also need to be concerned with Sarepta's ongoing cash burn. It's possible that an FDA approval of eteplirsen could lead to a licensing deal that has the potential to supply the company with a significant amount of upfront cash, but that's no guarantee based on how poorly drisapersen performed in late-stage trials.

Finally, even optimists have to have a little indigestion after the latest update on eteplirsen-treated patients at week 144. Prior to this update eteplirsen-treated patients had showed a decline in the 6MWT of between four meters and 21 meters from baseline. The 144-week update was a pretty substantial drop-off (33.2 meters) from the 14 meter reduction noted at week 120 and has some investors questioning the longer-term efficacy of eteplirsen. Where Sarepta heads next
In the hope column I'm really pulling for eteplirsen to succeed considering that DMD is a fatal and progressive disease currently without a cure. Unfortunately, hope doesn't drive a retirement portfolio.

I personally believe that it's extremely risky to play either the long or short side of Sarepta prior to the release of additional open-label data from the company's late-stage study. Because so much of Sarepta's market value is baked into eteplirsen, it means some investors could see nice gains while others could be absolutely crushed when additional data does emerge. Even though waiting on the sidelines could mean missing an immediate pop or plunge, once we have a better idea of how successful its exon-skipping technology is in a larger patient pool, investors will have a much better chance of being correct over the long term.

In essence, I'd consider parking yourself on the sideline in the meantime and closely monitoring Sarepta's new drug application filing situation, as well as additional clinical updates on eteplirsen.