Shares of regional airline operator Republic Airways Holdings (NASDAQ: RJET) soared 10% on Wednesday. The major news driving the stock gain was an announcement that the company had won a contract to fly 50 new Embraer E-175 regional jets for United Continental. 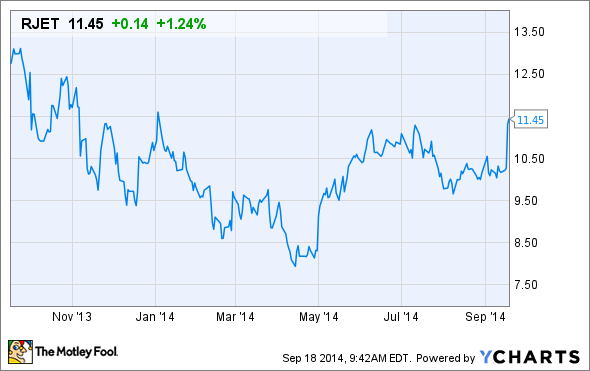 Flying Embraer's E-170 and E-175 jets is the most profitable part of Republic Airways' business. Big network carriers such as United prefer these larger jets, which usually have 66-76 seats, for regional service. Large regional jets are more comfortable for passengers than 50-seat jets or turboprops, and they are much more fuel efficient than 50-seat regional jets.

Adding large regional jet contracts is a big win for Republic Airways because major airlines will pay a premium for that service. However, from the standpoint of Republic Airways investors, the real value of the deal came in the fine print.

Republic executives had hinted during their most recent quarterly earnings call that they were increasingly optimistic about securing a new flying contract. Still, many observers were surprised by the announcement on Wednesday. After all, in May, Republic Airways presented financial plans that assumed it would not receive any new aircraft after early 2015.

According to its new contract, Republic Airways will buy 50 new Embraer E-175s between 2015 and 2017. These will enter service with United Express between July 2015 and August 2017 under 12-year service periods.

This timing lines up nicely for Republic. During the past year, it has rapidly added E-175s to its fleet under a contract with American Airlines -- but the last of those planes will arrive in the first quarter of 2015.

Republic already operates 66 regional planes for United Continental (69 including operational spares). As part of the agreement to add 50 new E-175s, United and Republic are modifying the contract terms for those other aircraft.

Contracts for 38 E-170 that Republic operates for Continental will be extended by about three years so that they expire between September 2019 and December 2022. This is crucial, because it ensures that these planes will remain in service for the bulk of their useful lives.

Republic Airways will remove its Q400 turboprops from service by September 2016. Photo: The Motley Fool.

Second, between January 2015 and September 2016, Republic will remove from service the 31 Bombardier Q400 aircraft it operates for United. Republic already has a contract to sublease 24 of these Q400s to U.K.-based airline Flybe. Republic will return three of the other Q400s to the lessor and will sell or lease the remaining four planes.

Growth, or not exactly?

While many people view the new agreement as a return to growth for Republic Airways, that's not quite accurate. Based on its current agreements, Republic will operate 223 aircraft by the end of 2017. That compares to 233 aircraft in service as of the end of last quarter.

Republic plans to remove its E145s, Q400s, and E-190s from service within the next two years. This will leave the company with a fleet 100% comprised of E-170s and E-175s. These are Republic's most profitable planes, and they offer two other huge benefits.

First, this move will vastly improve pilot productivity. Today, because Republic operates several different aircraft types, each year a large proportion of the company's pilots go through a costly and time-consuming training process to switch aircraft types. In just two years, Republic will have a single aircraft type (the E-170 and E-175 are exactly the same from a pilot training perspective).

Second, simplifying to a single aircraft type will smooth the process of merging Republic's three airline subsidiaries into a single regional airline. This will save millions of dollars in administrative costs annually.

Like all regional airlines, Republic Airways faces a long-term pilot recruitment problem. Low pay in the regional airline industry and tighter federal regulations on pilot training have made it difficult for regional carriers to attract and retain qualified pilots.

However, Republic's new agreement with United Continental puts it in great position to increase pilot pay to best-in-class levels over the next few years while still growing earnings per share. Considering that the company still trades for less than nine times earnings, this makes Republic Airways a solid long-term investment opportunity.