Target (NYSE:TGT) suffered from weak holiday sales in 2013 because of a series of missteps including a re-designed e-commerce site that confused consumers ahead of Black Friday and a massive security breach between Thanksgiving and Christmas that left tens of millions of Target customers vulnerable to credit card fraud. Eager to put these setbacks behind it, Target has implemented a new strategy to help it dominate the all-important holiday shopping season this year: Exclusive product lines with top brands.

The holiday season is the most important time of the year for retailers, with most stores generating between 20% and 40% of their annual revenue during the holidays. Moreover, November and December sales account for 20% of U.S. retailer's annual profit each year, according to the National Retail Federation. That means Target can't afford to make any mistakes this time around. Fortunately, the discount chain has laid out a smart plan to lure consumers into its stores over the holidays.

The big box retailer is getting back to what it does best: luxury fashion at affordable prices. Target has some of the hottest designers and brands working with it this year on exclusive "for Target" fashion lines that will be available in Target stores and online in time for the holidays. The retail chain recently announced a partnership with Toms shoes that promises to be a big hit this season. 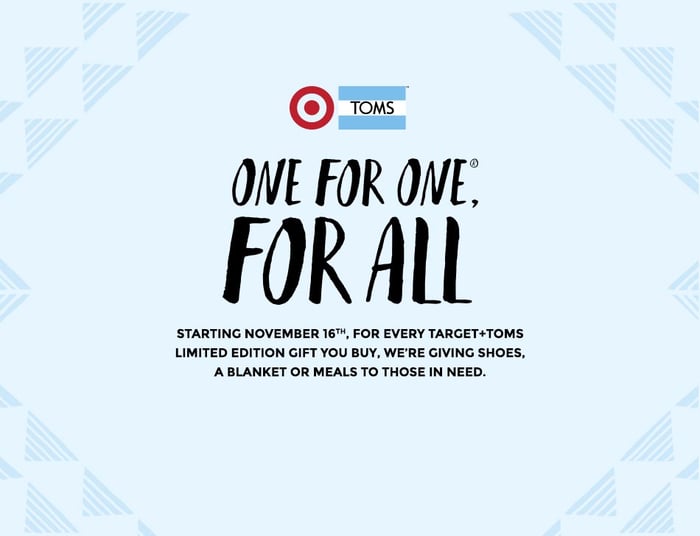 Toms designed 50 unique pieces for this limited edition collection that will only be available at Target stores and Target's e-commerce site beginning Nov. 16. This could give Target a competitive edge over rivals in the space such as Wal-Mart because consumers will only be able to purchase these items at Target.

The charity angle of this collaboration is another reason the partnership should be a hit with consumers. Toms one-for-one model, which gives a pair of shoes to a needy child for every pair it sells, has catapulted the company into one of the most popular brands on the planet today. In fact, Toms has donated more than 25 million shoes since it started in 2006, according to Bloomberg.

This presents a unique marketing opportunity for the big box retailer because, for every Toms for Target gift a consumer buys during the holidays Target will give shoes, a blanket, or meals to those in need. This is a smart strategy for the retailer because it makes people feel good about their purchases while also associating that feeling with Target's brand. Target says its TOMS for Target initiative has "the potential to provide more than 11 million meals, blankets, and shoes to those in need." Now that's a noble reason to visit your local Target store.

The TOMS for Target line will also be affordable, with nothing over $50. It makes sense, then, that the collaboration is already getting plenty of love on the Twitter-sphere, with dozens of media bloggers and Toms enthusiasts sharing the hashtag #TomsforTarget. Not to mention, it is only September, so this level of pre-holiday hype positions Target well heading into retail's most competitive season.

Target also teamed up with fashion designer Joseph Altuzarra recently. The Altuzarra for Target line hit Target stores in the U.S. and Canada Sept. 14 and was for sale online at Target.com. The launch was a huge success. In fact, just one day after the products went on sale Target had already sold out of many items both online and in its stores including the Altuzarra for Target trench coat and blazer with peplum detail. If this designer collaboration is any indicator, Target's strategy of exclusive "for Target" product lines should be a huge success for the retailer this holiday season.