Please ensure Javascript is enabled for purposes of website accessibility
Log In Help Join The Motley Fool
Free Article Join Over 1 Million Premium Members And Get More In-Depth Stock Guidance and Research
By Ashraf Eassa – Sep 24, 2014 at 9:40AM

What's going on with Apple's high transistor count A8 chip?

At Apple's (AAPL -3.00%) iPhone 6 and 6 Plus event, the company's Phil Schiller announced that the A8 chip found inside of the phones was made up of 2 billion transistors.

That's a lot of transistors, and about twice as many as found inside Apple's prior generation A7.

One observation that I've been able to make as I've run performance tests on my iPhone 6 Plus is that the processor and graphics performance doesn't really improve all that much from the prior generation A7 chip.

So, this had led many, including myself, to pose the question, "Where did all of those transistors go?"

Let's look at the chip
At first, I thought that Apple had made the GPU bigger and potentially put in a much larger level 3 cache memory. However, thanks to Chipworks and analysis done by chip expert Hans de Vries it turns out that this initial assumption was wrong. 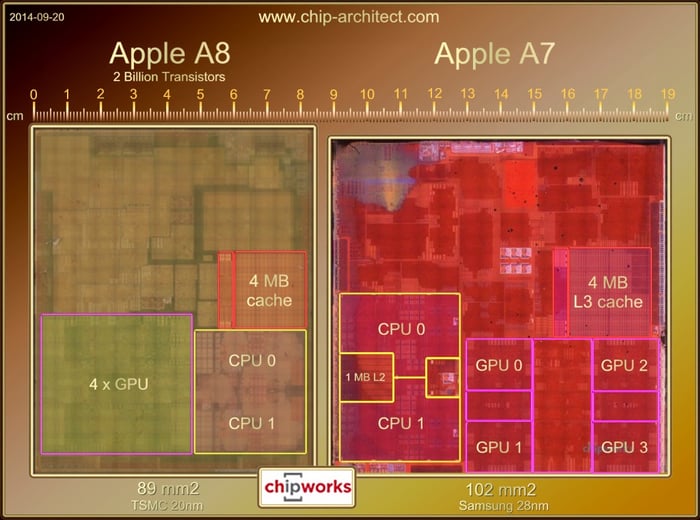 In fact, if you look closely at the picture, you can see that the CPU cores were more or less shrinks of the CPU cores found in the A7 (and the minimal performance increase in my testing corroborates this). Further, you can see that Apple didn't increase the size of the cache as the block of SRAM in the A8 (which is what the cache is made of) looks about half the size of the one found in the A7.

The graphics processor looks a bit bigger, likely due to the enhancements that came with the PowerVR Series 6XT GPU over the Series 6 GPU (credit goes to AnandTech's Ryan Smith for positively identifying the GPU as Series 6XT).

What does stand out, though, is that a pretty large percentage of the die is allocated to "noncore" parts. As I wrote previously, Apple indicated that it build a custom hardware block to perform facial detection (as well as an all-new image signal processor). I am legitimately curious as to how much of the die here is dedicated to the image signal processor and/or facial detection.

What else could Apple have crammed in there?
In order to try to understand what Apple may have added, I turn to a presentation from Intel's (NASDAQ: INTC) mobile and communications group, which shows some of the new hardware blocks the company added in its Atom Z3480/Z3580 processors over its prior generation Z2500-series chips.

My guess, then, is that Apple added new video encoder/decoder blocks (notice how the iPhone 6/6 Plus now supports 1080p video capture at 60 frames per second, up from 30 frames per second in the 5s), and potentially added a dedicated video signal processor in the same vein as what Intel did with Z3480/Z3580.

Tying this to economics
According to a recent presentation from semiconductor business expert, Handel Jones, many of the fabless chip companies are reporting an increase in cost per transistor at the 20-nanometer manufacturing technology relative to the 28-nanometer node.

If Jones is correct, and if Apple hasn't been able to drive some pretty serious price concessions on the part of its manufacturing partner Taiwan Semiconductor (TSM -1.04%), then in theory this A8 chip costs a significant amount more to build than the prior A7 chip did -- about twice as much assuming similar costs per transistor.

Foolish bottom line
Apple seems to have added a significant number of (potentially costly) transistors to its A8 design over the A7. While we on the outside have some idea of what Apple might have added to the A8 relative to the A7, it's tough to imagine that everything I outlined above is responsible for an incremental 1 billion transistors.