In a fortuitous coincidence, the words "Coca-Cola" are pronounced "ke kou ke le" in Mandarin, which translates literally into "Delicious Happiness." Coca-Cola (NYSE:KO) loves this linguistic quirk; it's built-in marketing, and it's emblematic of the magic of the brand. Coke's management has devoted intense activity lately to recapturing some of that brand (and sales) magic, and to that end we recently discussed why Coca-Cola's stock may rise over the next 12 to 24 months. In this article we'll tackle three reasons why the stock might fall over the same time period.

If you're a student of marketing theory, you might have been exposed to the "leaky bucket" metaphor. Picture a leaky bucket of water placed under a running tap. Water escaping from the bottom represents the loss of customers, which is inevitable in any business. This phenomenon is known as "attrition." Water flowing out of the tap -- the gaining of new customers -- is referred to as "acquisition." In a prosperous business, water must flow in at a faster rate than water leaking out; customer acquisition must outpace customer attrition.

Coca-Cola finds itself in an analogous position with its flagship Coke and Diet Coke drinks. Consumer health concerns pressuring the market share of the company's two biggest revenue sources can be thought of as holes in Coke's revenue bucket. Management has tried to deal with this by releasing water from three different taps: the acquisition of noncarbonated, "still" brands with growth potential; equity investments in beverage innovators such as Keurig Green Mountain and Monster Beverage; and increasing marketing spending by $1 billion to prop up its legacy soft drinks.

But the company is barely holding at an equilibrium state in its efforts to support declining soft drink sales with a mix of other revenues. Annual revenue peaked at $48 billion in 2012, then fell to $46.9 billion last year. For 2014, year-over-year revenue was down another 2.6% in the first two reported quarters. The company will need a fairly successful back half of 2014 to show stabilization of this decline. On a longer timeline, shareholders will worry until they see that new products are changing the direction of water in Coke's revenue bucket.

When a business virtue becomes a vexing puzzle

For decades, Coke has prospered through steady global expansion. But with a footprint in over 200 countries, the company now has few completely new markets to enter, so it must instead push for increased shelf space and distribution. Yet the world is problematic: Venezuela and Argentina are both fighting rampant inflation. Mexico, Coke's biggest single market outside the U.S., has seen some growth potential curbed by a "sugar tax" imposed on soft drinks. And China's manufacturing output has stalled this year, with ominous implications for consumer purchases.

Detail of Coca-Cola "Who We Are" infographic. Source: Coca-Cola.

Only one of the company's geographic segments posted sales growth this year through June, as seen in the chart below, which does not include revenue from Coke's owned bottlers:

While the European results are encouraging, with Euro area GDP at a tenuous year-over-year growth rate of just 0.7%, it's unlikely Coke will find a sustained wellspring of revenue there. Add in the negative performance of traditional growth segments such as the Asia-Pacific and Latin America, and investors might rightly question where, literally, revenue expansion will be found.

Perhaps one of Coke's greatest challenges is the changing definition of refreshment. The company's business model was much easier to implement when drink aisles proliferated with rows of its trademark red and white-labeled merchandise. But consumers' tastes seem to be expanding exponentially. Craft soft drink brands are gaining more real estate within grocery stores, as are bottled teas, water, juices, and energy drinks. Coke's entrepreneurial arm, though, has given the company a much-needed ear to the ground, and a means to invest in small, upcoming, nonsoda, brands, including the popular Honest Tea.

The rise of SodaStream, as well as the introduction of Starbucks' in-house, handcrafted, naturally flavored Fizzio soft drink, point to yet another challenge: the emergence of nontraditional distribution channels. Coke has responded by buying into channels, most notably its minority stake in Keurig Green Mountain, which, through the upcoming Keurig Cold carbonated beverage platform, will give the soft drink giant entry into the newest distribution channel: consumers' homes.

But the company can't be everywhere. The risk is that consumer preferences will continue to evolve to smaller brands and new avenues outside of the traditional grocery store purchase. Such trends won't put Coke out of business, but they could provide enough of a headwind to complicate revenue and earnings growth.

The three potential obstacles above have implications for Coke's current forward price-to-earnings multiple of nearly 19. Since the recession of 2008, that forward multiple, a measure of price against expected earnings, has enjoyed a steady uptrend: 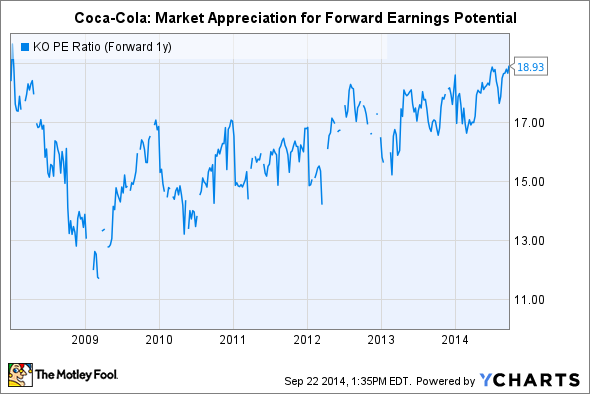 Investors' confidence in Coke is based on many factors, including its massive size and distribution prowess, its vaunted brand (which, despite recent tarnish, is still ranked third globally by Interbrand, at an estimated value of $79 billion), its dependable cash flow, and its consistent earnings growth. Yet any of these scenarios could depress the stock, while investors assess the effectiveness of the company's tactics. Watch revenue trends in the third and fourth quarters of this year for some early clues on the stock's movement over the next 12 to 24 months.