Noodles & Company (NASDAQ:NDLS) stock is down 58% over the past year, as its pre-IPO growth story has turned sour. To calm investors' nerves over its lowered profit forecast, CEO Kevin Reddy is touting the chains plans to open many new restaurants this year. While that growth may sound appetizing on the surface, it could leave investors with indigestion in the long run.

Man with a plan
Noodles & Company is a fast-casual chain with 410 locations nationwide, serving pasta, salads, and sandwiches. The company hit the public markets in June of 2013 with much hype, as it promised speedy unit growth. Despite two disappointing quarters, Reddy has doubled down on Noodles' expansion plans.

This news is surprising, considering Noodles also slashed its sales and profit guidance for 2014 in August, after reporting earnings that missed analysts expectations by $0.03 per share.

Is Noodles & Company a growth company?
Noodles & Company hit the public markets, along with Potbelly, in 2013 as investors were keen to find "the next Chipotle." Both IPOs were sold to investors based on their "white space opportunity," meaning there is a lot of places in the U.S. they could (theoretically) open new stores. The problem with that idea, is that they both have always had mediocre same-store sales.

Noodles has accelerated its store count, from 255 to 410 locations, since 2010. The two biggest leaps in store count growth came in the year of, and the year leading up to, its IPO, and the cash from its IPO was used to pay down that debt. If Noodles can't reverse the same-store sales trend in the table above, it may not generate enough cash flow to cover its costs, now that its IPO has passed.

Considering the company was founded in 1995, and only has 410 locations today, it's hard to believe it will grow to 2,500 locations in the next 15 years without raising tremendous debt. However, if there were a reason to believe, it would be demonstrated demand through robust same-store sales. Simply being a fast-casual chain, and having areas in the U.S. you could expand to, if you did happen to have demand, is not enough. Typically, smaller chains grow same-store sales faster, because they're not splitting demand with nearby existing stores.

Noodles & Company saw same-store sales decline in the first two quarters of this year, 0.7% and 1.6%, respectively. Each time, management blamed the weather (including Q2), even as Panera (NASDAQ:PNRA), which sells similar items, showed much better results of 0.1% growth and 3.7% growth. Yet, Noodles still plans to open as many as 65 new stores this year (50 company-owned stores and 15 franchise locations). That would represent a store count growth of 16% for company-owned locations, and 24% for franchise locations, both faster than Chipotle, which had a 17.3% spike in comparable sales last quarter. Unless something is set to drastically change, I'm not sure that is a wise move for Noodles.

Why should investors care?
Noodles' continued focus on new restaurant growth makes me nervous. Opening new restaurants requires a lot of capital. According to its 2013 annual report, Noodles spent $819,000 in development and construction costs per new restaurant in that year. In that same report, Reddy targeted annual earnings growth of 25%. Considering the chain now has slashed its profit outlook to flat, perhaps it should slash its new store goal further.

I worry that the fixed construction and operating cost of new stores, coupled with weak traffic at those same stores, could put Noodles in a cash flow bind. By measuring Noodles' operational cash flow, compared to its capital expenditures (or the CF to CAPEX ratio), we can see it's in a tighter financial position than some peers. The higher this number is, the better a business is able to cover its capital expenditures. 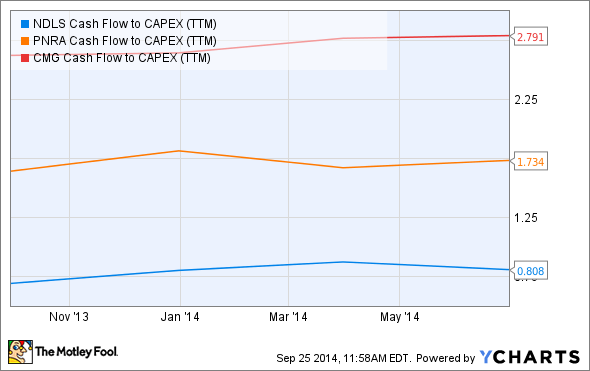 Typically, more established chains will have steadier cash flows, so it's not unusual for Noodles to score lower than Panera or Chipotle. However, this illustrates how tight things are. If Noodles' profitability doesn't improve, its construction costs may be financed by debt.

Further, I am concerned by Noodles' operating margins (the amount of profit from each dollar of sales), which are only at 5.18%. The chain has expanded its menu to offer many non-pasta items including sandwiches, salads, and soups. Perhaps the operating margin is being affected by this, but that still doesn't explain why Panera has higher margins (below), despite having an equally expansive menu. 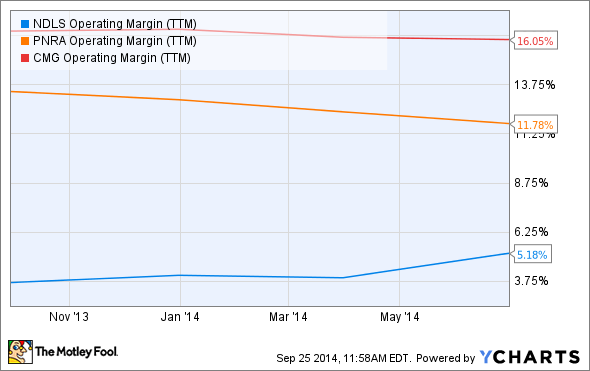 Whatever the reason, these tight operating margins will impact Noodles & Company's profitability, even if same-store sales snap back in the latter half of this year.

Noodles & Company needs a new focus
Noodles & Company is stuck in the trap of "growing for growth's sake." The company still has potential, but it needs to change its focus. It would be refreshing to see management focus on what matters. It should be fixated on improving demand for its product and improving its operating efficiency, not on opening new locations.