Recent industry research forecasts that between 2013 and 2032, business jet deliveries will grow to 24,000 units, up from 6,000 units between 2003 and 2012, resulting in total revenues of $650 billion. Of these, the light category will constitute 18% of the revenues at 10,500 deliveries; medium, 37% at 8,000; and large, 45% at 5,500. Gulfstream, the aviation arm of General Dynamics (NYSE:GD), could prove to be a big beneficiary of this demand as it rules the fast-growing large business jet segment. Of the six models that Gulfstream offers, four are in the large jet segment and two in the midsize category. The year 2013 was stellar for the company, with deliveries reaching almost pre-recession levels. Here's a look into its playbook.

Demand for large jets is playing into Gulfstream's hands
After reaching a peak of 1,315 deliveries in 2008, the business jet market shrunk almost 25% in 2009 with more than 800 order cancellations, according to Bombardier's (OTC:BDRAF) estimates. Now, after six years of waiting, deliveries finally rose 1% to 678 units in 2013, driven by a recovery in North America. The number of private jet flights touched the best-ever level since 2008. The momentum has increased in 2014 and from January to July, new business jet deliveries have increased 12.4% against the same period last year, according to General Aviation Manufacturers Association data.

Most of the growth is coming from the pricier large business jet category. Bloomberg data shows that since 2009, large business jets have grown 4%, while small and midsized jets are down 12%. In 2013, large jet deliveries increased to 249 units, up 32% from 2011, while medium and small jet deliveries fell 15%. Demand is seen coming from fleet expansions and replacements. In the first six months of 2014, preowned sale transactions were up 8.5% and the time taken to sell has also gone down (57 days) compared with 2013. 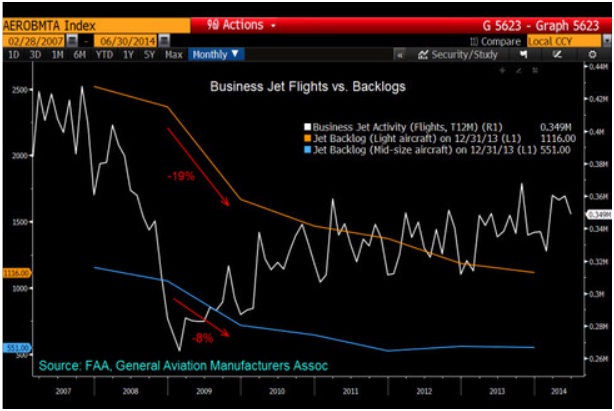 Capitalizing on the popularity of large jets, Gulfstream turned in a stellar performance in 2013 with 144 plane deliveries -- its second best in the last 10 years. It ranked second in terms of deliveries behind Bombardier but it toppled the Canadian company in terms of revenue, as it sold 121 of its larger models compared with Bombardier's 62 large Global jets. 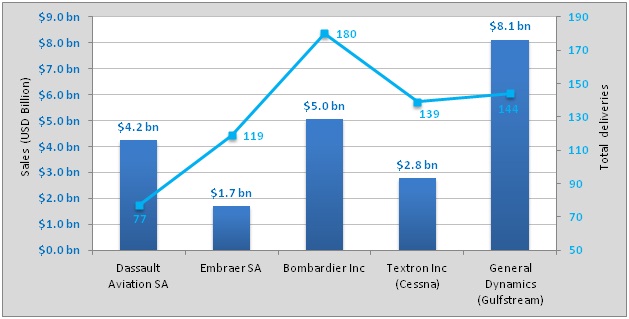 Strong portfolio
To keep its growth trajectory strong, Gulfstream is rolling out its new and advanced large jets. The company is capitalizing on the success of G650 and upgrading it to G650ER. At $65 million, G650 is the biggest and fastest Gulfstream product with the capability to fly nonstop for 7,000 nautical miles (nm), rise to an altitude of 51,000 feet, at a maximum speed of Mach 0.925, carrying up to 18 passengers. The G650ER goes a notch up with a range of 7,500 nm. Gulfstream says, "It's the only business aircraft in the world capable of traveling 7,500 nautical miles."

Existing owners of G650s will have the provision to upgrade to G650ERs by modifying the fuel system by shelling out $2 million from the first quarter of 2015. The jet will be competing with Dassault Aviation's Falcon 8X, and Bombardier's Global 7000/8000, which is slated to enter service in 2016-17. And as Business Insider's Alex Davies says, "Until then, the G650 will remain the gold standard (of the segment)."

Apart from G650, other larger business jets from the company include G550 and G450. G550 is capable of flying 6,750 nm, and offers maximum speed of Mach 0.885. Gulfstream may launch an aircraft to replace its G450 that will compete head to head with Dassault's Falcon 5X.

Presence in the fast growing business jet markets
Apart from the U.S., which is the largest market for business jets with around 11,500 private jets in service, Gulfstream wants to tap fast growing markets in different parts of the world. This is important because business jet fleets in Latin America and the Middle East are projected to grow at a compound annual rate of 3% and 7%, while India and China will see growth of 13% and 12%, from 2013 to 2032.

Gulfstream has a strong footing in Latin America, selling more than 70 jets in the last five years, and has grown its fleet in the region by 70% to 180. It expanded operations in Brazil in July to take advantage of the growth in Latin America, the third largest market for executive jets. In Europe, Gulfstream's fleet has nearly doubled in half a decade and stands at 206 aircraft as of May this year. Gulfstream opened a sales and design center in London in June 2013.

As for Asia, in a CNBC article, jet advisory company Aviatrade president Philip Rushton said, "The Asian market is driving global demand right now." Gulfstream was the first to start full-service operation in China in 2012. Its fleet in China (including Hong Kong) is a good 130, with many orders to brag. In April, the company bagged the biggest order in its history of 60 jets from China's Minsheng Financial Leasing Co.

Foolish conclusion
Gulfstream is giving a tough time to competitors, surging ahead with its unparalleled offerings in the large jet category and deepening its presence in markets worldwide. Market trend bias toward large jets is a big boon for the company, and it seems Gulfstream will make the most of it.