Please ensure Javascript is enabled for purposes of website accessibility
Log In Help Join The Motley Fool
Free Article Join Over 1 Million Premium Members And Get More In-Depth Stock Guidance and Research
By Demitri Kalogeropoulos - Sep 28, 2014 at 9:00AM

The pre-launch buzz had investors expecting huge things from this video game's release. So, how well has the title delivered?

Investors apparently aren't impressed with Destiny, Activision Blizzard's (ATVI -0.44%) newest video game property. The stock has fallen 11% since the title's release in early September. That's compared to a 1% dip in the stock market as a whole. 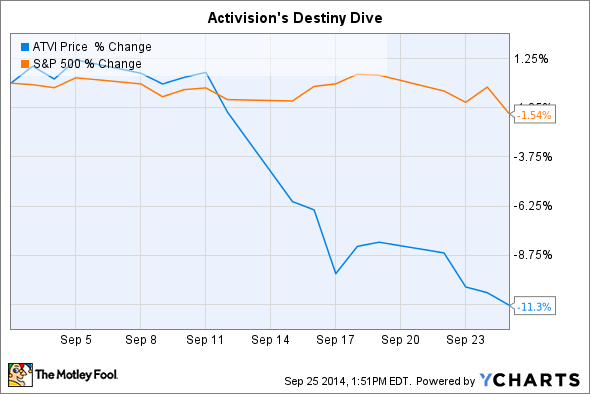 What gives?
Some of that slump can be tied to expectations for the launch that were getting way out of hand. For example, on the day after the release, Activision posted a sales update showing that Destiny had "sold-in" $500 million of revenue through Sept 10. While that figure is dominated by sales to retailers like Wal-Mart and GameStop, along with months of pre-order revenue, a few financial media outlets erroneously took it to represent a single day's sales to end-users.

That would have put Destiny -- a new property with no built-in following -- in the same league as Take-Two's iconic Grand Theft Auto franchise (GTA V booked $800 million of retail sales on its first day after release last year). Sure, investors knew Destiny would be a big launch. But no one should have been looking for the title to immediately put up sales numbers to challenge one of the industry's biggest, longest-running franchises.

A work in progress
So, how is Destiny really doing? It's still early, but we have a few data points that can start answering that question.

For one, the title's $500 million launch haul was exactly half of what Activision managed with the release of Call of Duty: Ghosts last year. Count that as a win for the company, as it marks a successful launch for a new piece of intellectual property. Remember, Call of Duty took time to grow into a billion-dollar franchise. And Destiny might even get to that figure in the next year. Activision recently said that the game delivered $325 million in sales (to gamers) during its first five days of availability. With pre-order sales, holiday sales, and digital revenue still to come, the title has a clear path toward hitting that $1 billion mark.

Hands on impressions
We also know a bit about how people are enjoying the game now that they can actually play it. Critical reviews haven't been as great as the pre-launch buzz, which saw Destiny accumulate more than 100 awards at industry conferences in the last year.

In contrast to that sweep of praise, Destiny has earned a disappointing review score of 77 out of 100 at metacritic. That's well below the 97 that developer Bungie managed with its first Halo installment. In giving Destiny a 78, IGN's conclusion was typical of what most reviewers found. The gaming site said Destiny was "mechanically excellent," but that it was "ultimately unable to be all the different games it's trying so hard to be."

Still, gamers will have the final say, here, not critics. The best news on that score, besides the successful launch, is that Destiny players logged over 100 million hours of gameplay in the first week after release. That level of engagement is on par with Activision's industry-leading Call of Duty games. So, while Destiny isn't a Halo or Grand Theft Auto (yet), it's still on track to become one of Activision's biggest hits this year, and one of its few billion-dollar franchises in the years ahead.