When Carl Icahn tweeted that he had bought a 9% interest in Family Dollar (NYSE:FDO.DL), investors knew something big was brewing.

This dollar store chain is worth considerably more than that after the arrival of activist investors. Photo: Flickr user Mike Mozart.

While other marquee activist investors had taken large stakes in the lagging dollar store chain -- Nelson Peltz even tried to buy the company for $7 billion in 2011 -- Icahn's arrival carried an air of expectancy. For good or ill, he's not typically someone who sits on his hands, and it's not long before the pot is stirred.

But what about Family Dollar attracted Icahn and his peers?

Suburban sprawl
With more than 8,200 locations stretched across 46 states, Family Dollar is the second-largest dollar store chain, behind industry leader Dollar General (NYSE:DG), which boasts more than 11,300 stores, and firmly ahead of No. 3 player Dollar Tree's (NASDAQ:DLTR) 5,100 stores.

Yet despite its reach, Family Dollar has straggled behind its rivals. As Icahn himself was soon to make clear, the chain has underperformed the competition on virtually every measure and its stock has lagged the broader market over the past one- and three-year periods.

In an economic environment that ought to be favorable to dollar stores -- and for both Dollar General and Dollar Tree it has been -- Family Dollar has been unable to cash in. It was imperative, Icahn said, that the company "be put up for sale immediately" as a result.

Price is what you pay
At one end, Dollar Tree has marked out its territory as the go-to deep discounter. Almost everything it sells costs exactly $1, which helps a penny-pinching consumer keep a firm grasp on his or her budget when entering the store. By expanding the amount of consumables it offered, particularly in the frozen food section, along with adding brand names to its shelves, Dollar Tree has made itself indispensible to the tight-money customer. 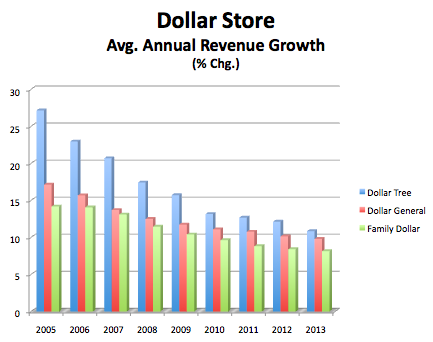 Dollar General, on the other hand, has succeeded by offering a range of values to customers, while also keeping a handle on costs. It's revenue might not grow as fast as that of Dollar Tree, and it might earn a little bit less on operating margins, but its national sprawl has kept it in front of consumers who are looking to save when shopping.

Meanwhile, Family Dollar went from being the premier dollar store chain to falling by the wayside. More closely following the Dollar General script, it too offered a range of price points, but until recently it was tending toward the higher end. That seemed to confuse shoppers who entered looking for extreme bargains but came away with the feeling that this was a "dollar store" in name only.

Value is what you get
Belying the economic recovery, consumers who went down market during the recession largely haven't upgraded again. The well-off might be doing better, but the middle class continues to be ground down.

According to the analysts at Sentier Research, inflation-adjusted median household annual income as of June was down 3.1% since the economic recovery supposedly began in June 2009, and off nearly 5% below where the recession started in December 2007. It's just starting to improve, but these numbers explain why dollar stores are still a popular destination with shoppers.

Family Dollar's management belatedly realized that its pricing policies were putting it more in competition with mass retailers like Wal-Mart (NYSE:WMT) than with other dollar stores, not an easy game to win, and earlier this year it cut prices on some 1,000 items.

it might be too little, too late for Family Dollar to recover and why Icahn said it was time for management -- and the company -- to go.

He who hesitates is lost
While the billionaire's favored acquirer, Dollar General, dithered on making an offer, despite supposedly being in favor of a union, Dollar Tree stepped up with an $8.6 billion bid that management accepted. Too late, Dollar General countered with a higher offer and then raised it to $9.1 billion and a pledge to shed hundreds of stores to get over Family Dollar's worry over antitrust regulations.

A Dollar General-Family Dollar tie-up makes sense as they have similar retail strategies, but a 19,600-store-strong chain, even if a bunch were sold, might be too high a hurdle to overcome. But the fact that Dollar Tree is willing to keep on Family Dollar's CEO after completion of the deal and Dollar General has not made that commitment probably sweetens the pot in favor of the former.

So long, goodbye, see you later
Shares of Family Dollar have soared almost 30% since the drama began; Icahn has since sold out of his position in the dollar store chain, indicating even he felt the bidding war wouldn't go much higher.

All told his entrance on the scene heralded big changes, underscoring the dysfunction at Family Dollar. It took a deep-pocketed investor to step forward and make the change happen. Regardless of which company ultimately wins the merger battle, Family Dollar will be a different experience afterward for consumers.