Larry Ellison is the third-richest American today, according to a fresh Forbes report. With a net worth of $48 billion, Ellison is also the fifth-richest person in the world.

But Ellison's wealth accumulation just hit a brick wall. Thirty-seven years after founding enterprise software titan Oracle (NYSE:ORCL), Ellison has handed over the reins to new talent and stepped out of the CEO office. What will he do next, and how will the end of an era affect Oracle shareholders?

Ellison's legacy? Still happening
First, it's not like Ellison is stepping out on a permanent vacation.

In Oracle's day-to-day operations, he now serves as the company's chief technical officer. Moreover, he's the executive chairman of Oracle's board of directors, which gives him plenty of say in the company's long-term strategic direction.

"Larry has made it very clear that he wants to keep working full time and focus his energy on product engineering, technology development and strategy," said Oracle board member Michael Boskin in a prepared statement. So Ellison's new titles are more than just honorary send-off honors. He's expected to keep working.

Moreover, Ellison's CEO chair has been filled by two of his top lieutenants.

Safra Catz has served as Oracle president since 2004 and as CFO since 2011. Oracle already dropped the CFO title from her executive biography, but has yet to name a new financial chief.

Mark Hurd, who shares the CEO title with her today, was also Catz's co-president since joining Oracle in 2010, surrounded by a scandal-tinted whirlwind. Hurd didn't leave his CEO post at Hewlett-Packard (NYSE:HPQ) on good terms, but Ellison thought his talent was too valuable to sit unemployed.

In other words, don't expect Oracle to be dramatically different under the new leadership structure. Ellison has plenty of fingers in the new pie, and two of his closest confidants have taken joint command of the company.

Why is Ellison staying so close?
If Ellison wants to keep close tabs on Oracle, it's hard to blame him. After all, Ellison's Oracle shares and stock options are worth $43 billion today.

Seen from a different angle, Ellison's Oracle shares account for over 89% of his net worth. Ellison would still be a multibillionaire if Oracle became worthless today, but he'd nearly fall out of the top 100 list of rich Americans. He'd suddenly be worth less than Charles Schwab and Sumner Redstone.

The vast majority of Ellison's wealth is firmly tied up in Oracle. Staying close to the company's operations close makes all kinds of sense from Ellison's perspective.

What's next?
Ellison's changeover comes at an interesting time in Oracle's history.

Sales growth has stalled in recent years. The company's gross margins remain incredibly strong, even for the highly profitable enterprise software industry, but have also stopped showing the gradual improvement that once served as Oracle's hallmark.

Compared to archrivals Microsoft (NASDAQ:MSFT) and IBM (NYSE:IBM), Oracle is kind of a happy medium. Microsoft has shown growing sales but falling margins in the last couple of years while IBM moved exactly the other way around. And like I said, Oracle kind of hovers in place: 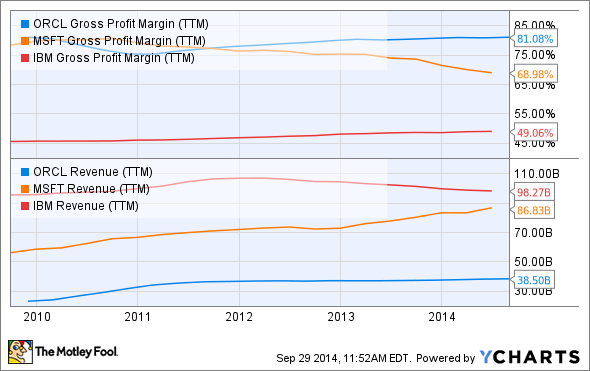 Catz and Hurd aren't likely to take Oracle in an entirely new direction, especially under the watchful eye of Executive Chairman Larry Ellison.

So Oracle will keep chipping away at the cloud computing market, while working out a strategy for the Internet of Things. The company just launched a large platform-as-a-service effort, giving Oracle broader exposure to the cloud computing industry.

And it happened under the official watch of Catz and Hurd, with Ellison staying at arm's length for this important strategy refinement. Oracle investors should keep a close eye on how Oracle's new cloud-based data analysis and system management tools resonate in the open market. This is an early litmus test for Oracle's new leadership, which will set the tone for the company for the next several years.