eBay is spinning out PayPal in 2015, and also pocketing billions of dollars in debt and repatriated cash. What's going on here?

Activist investor Carl Icahn doesn't always get what he wants -- at least not right away.

Last January, Icahn assembled a 0.8% stake in online auction service eBay (EBAY -0.62%), then used this ownership position to pressure the company into making some changes. Specifically, he wanted eBay to unlock the value of its PayPal payments service. Spinning this division off as an independent company was a "no-brainer," according to Icahn.

At the time, eBay CEO John Donahoe insisted PayPal was a natural part of eBay. "When you separate two highly intertwined and highly performing businesses, it creates significant distraction and disynergies," Donahoe said.

In April, Icahn backed down due to a lack of support from larger eBay shareholders. "If they did the split-up now, yes, the stock would go up," he told Reuters. "But I am looking at it and think, 'Why do it now?' I think the stock is very undervalued."

The company never did pick up a higher valuation. As of Monday night, eBay shares were down 6% from Icahn's April retreat. And yet, eBay has turned around and agreed to split PayPal off as a separate business.

Donahoe's tenor has changed dramatically, too.

"For more than a decade eBay and PayPal have mutually benefited from being part of one company, creating substantial shareholder value," he said in a prepared statement. "However, a thorough strategic review with our board shows that keeping eBay and PayPal together beyond 2015 clearly becomes less advantageous to each business strategically and competitively. The industry landscape is changing, and each business faces different competitive opportunities and challenges."

Pending regulatory approvals and other standard closing conditions, PayPal should step out on its own in the second half of 2015. Donahoe will lose his executive title that day, settling for a seat on one or both of the new companies' boards of directors. eBay marketplaces President Devin Wenig will become CEO of the "new eBay," while Dan Schulman steps in from American Express (AXP -0.06%) to run the PayPal business. To get Schulman's feet wet, he's starting today as president of PayPal.

What's the big deal?
PayPal is a major force in online payment services.

In the first six months of 2014, the service collected $3.8 billion in revenue on $107 billion of total payment volume. By comparison, American Express saw $8.6 billion of noninterest card service revenue on $327 billion in card billings.

Yes, American Express is bigger than PayPal -- but the card service is growing sales at 8% year over year while PayPal reports 28% growth. It's fair to say these services play in the same ballpark, and Schulman should hit the ground running.

PayPal is also growing faster than eBay's auction and reseller business. The so-called marketplaces division grew sales by just 9% in the first half of 2014.

Against this backdrop, I'm all for spinning out star performer PayPal and giving investors a choice of which business unit to focus on. Icahn is certainly getting what he asked for, only a couple of quarters later.

And eBay is in the market for large cash infusions these days. The company took on $3.5 billion of fresh long-term debt earlier this summer, and even brought back $6 billion in foreign cash despite the heavy tax implications of doing so.

What is eBay up to?
The cynic in me has to wonder why Donahoe and eBay's board of directors suddenly felt the time was right.

"This is the best path for delivering sustainable shareholder value," according to the press release announcing the move. But it wasn't the best way forward less than six months ago.

Taken together with the curious cash management moves, this spinoff starts to feel like a lifeline.

However, eBay remains a solidly profitable and growing business. Free cash flows are having a positive hockey stick moment in 2013 and 2014. There's nothing terribly wrong with this business, at least not the kind of disaster that would require a life-saving cash infusion. 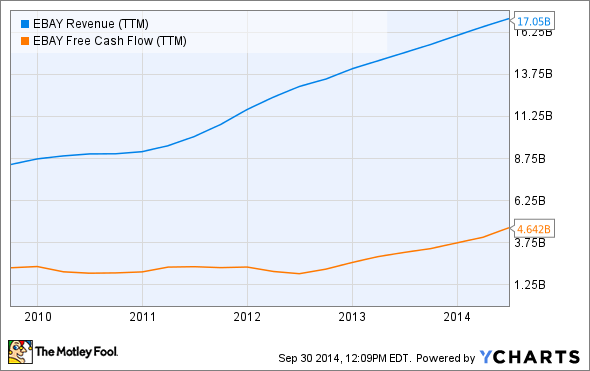 eBay has something up its sleeve here. Is Donahoe planning to go out with a bang? Is eBay looking to spend these heaps of cash on a game-changing acquisition? The motives are unclear but an obvious multibillion-dollar buyout target doesn't appear on eBay's horizon. All told, investors will have to stay tuned.