Please ensure Javascript is enabled for purposes of website accessibility
Log In Help Join The Motley Fool
Free Article Join Over 1 Million Premium Members And Get More In-Depth Stock Guidance and Research
By Demitri Kalogeropoulos – Oct 1, 2014 at 8:30AM

The retailer isn't content to just grow sales at existing locations. It wants to dramatically expand its footprint as well.

Costco (COST -0.15%) is sitting on top of the retailing world. As rivals struggle with flat or negative sales growth, the warehouse operator is making it look easy. Costco logged a 5% comparable-store sales improvement over the last nine months, leaving competitors from Target to Wal-Mart's Sam's Club in the dust.

But the better news for investors is that management isn't settling for industry-thumping comps alone. Costco is actually in the middle of its most aggressive expansion plan yet, one that executives see as a big down payment on future sales growth.

New stores aren't cheap
The company is on pace to spend $2.2 billion on capital investments this fiscal year, with almost all of that cash going toward new warehouse openings. Those store launches tend to be very expensive. At a massive 150,000 square feet, a typical Costco location requires a lot of real estate, particularly after throwing in a big parking lot and, increasingly, a successful gas station on the premises. 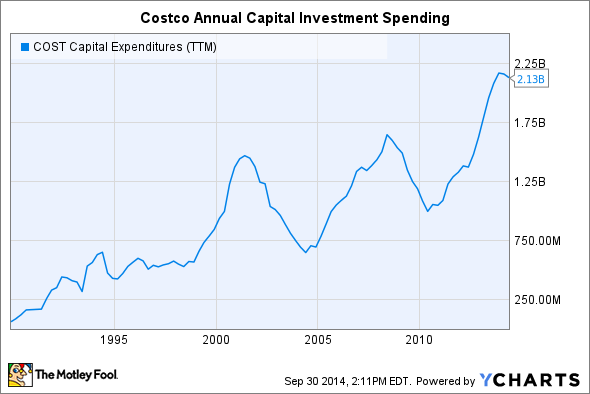 Taking its last full fiscal year as an example, the company shelled out $2.1 billion in 2013 to open 26 new warehouses for a price tag of roughly $80 million each. That could be considered a risky investment, as new stores average less than $100 million in revenue to start, while Costco's profit margin is below 2% of sales.

A quick payoff
However, it doesn't take very long for those new warehouse locations to start pulling their own weight. 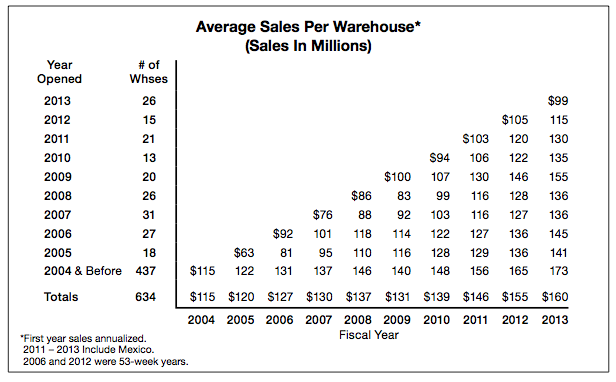 The above chart from Costco's annual report depicts the company's average revenue per warehouse, listed by opening year. At the top right, you can see the inaugural performance of locations that opened in 2013. They produced the $100 million of annual sales discussed earlier.

As you move down that far right column, you can see how these young warehouses get stronger as their membership base grows. The key takeaways from the chart are just how quickly -- and how consistently -- new warehouses improve. Locations that opened five years ago, for example, turned in a $140 million annual sales pace. And Costco's best performers, those stores that have been open for 10 years or longer, raked in $173 million each.

So, new locations are generally good for the business, but is that $2 billion spending pace too much? Not in the context of operating cash flow. 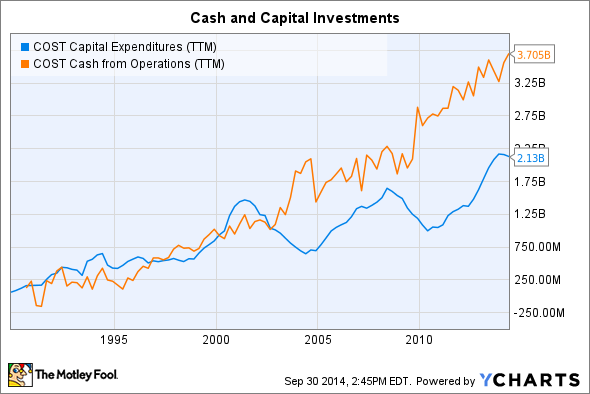 In fact, the company is generating so much cash, almost $4 billion over the last 12 months, that the bigger risk is that Costco isn't opening new locations at a quick enough pace. Last year, executives had left open the possibility of launching as many as 36 new warehouses in this fiscal year, but the company only managed 30 -- the low end of its expansion target.

This year's freshman class
Still, those 30 new warehouses are enough to qualify for Costco's quickest growth pace in at least 10 years. The company spent $1.5 billion in just the last three quarters and opened 20 new locations over that time, most recently in Louisiana and Texas, and one each in Japan and Korea.

All told, when Costco posts results for the fiscal year that just closed last month, the total store footprint should be sitting at 663 warehouses worldwide. That's 29 more than last year, with just one location, in Mexico, closed because of hurricane damage. Investors should take that ramp up in warehouses as a positive sign that points to more sales growth ahead. Shareholders should also look for an even bigger cash commitment and launch target for the next fiscal year, when Costco posts its fourth-quarter results next week.