Every company has one number that defines its success more than any other. For social-media giant Facebook (META 0.93%), that number is ...

This number is Facebook's average revenue per user, or ARPU, for its most recent quarter. Facebook defines ARPU as its total revenue for a quarter divided by the average number of monthly active users, or MAUs, at the beginning and end of that quarter. Over the past few years, both of these numbers have exploded -- but it's the impressive growth in ARPU that has made Facebook the hottest story in Silicon Valley in its decade of existence:

Over the past four years, Facebook's MAU count has grown by roughly 175%, from 482 million people to over 1.3 billion people. To put that in perspective, Facebook's monthly user base grew by roughly the combined population of the United States, Brazil, Russia, Japan, and Canada in the time it takes a typical teenager to complete high school.

However, if its ARPU had remained constant over this time, Facebook would have made less than $1.3 billion in revenue during its latest quarter. Instead, the company kept investors happy with $2.9 billion on the top line. In the second quarter of 2010, Facebook's ARPU was $0.94, less than half its current ARPU of $2.24. Facebook's quarterly revenue quadrupled in four years, instead of merely doubling as a result of this growth in ARPU.

The really impressive thing about Facebook's ARPU is that its growth rate has actually been increasing over the past two years, even as its MAU growth rate inevitably slows due to the simple fact that most of the world's Internet-connected population is already on the social network:

A good chunk of this growth has come from Facebook's home country -- ARPU in the United States and Canada, which have always held Facebook's most valuable users, has shot up from $1.87 in 2010 to $6.44 today. In percentage terms, it's an increase of 244% in ARPU, which surpasses the ARPU growth of all other parts of the planet that Facebook serves, save for the "rest of the world" regions, which have consistently lagged behind the rest of Facebook's reportable regions in actual ARPU: 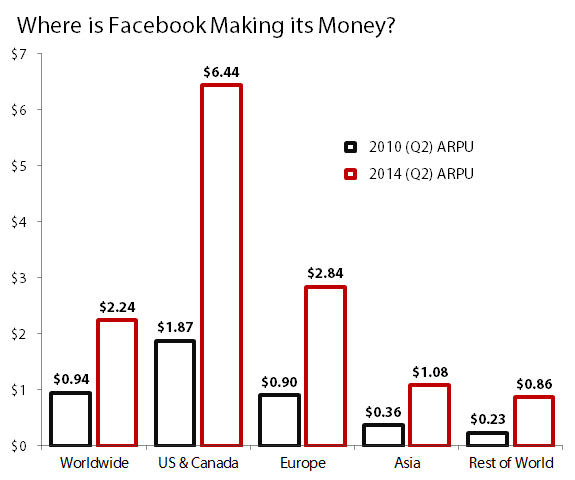 None of this impressive growth would have likely been possible had Facebook not done what many analysts initially feared impossible. In 2012, as the company prepared to go public, much was made of the fact that Facebook had yet to monetize its mobile user base, which stood at 488 million MAUs (54% of all MAUs) just before its IPO.

When Facebook began reporting mobile-sourced revenue in its first quarter as a public company, it earned only 3% of its advertising revenue from mobile sources, which worked out to roughly $0.05 in mobile-sourced ARPU -- Facebook does not provide its own mobile ARPU figures, so these numbers are calculated based on available figures for mobile MAU and revenue. Today, Facebook's mobile-sourced ARPU is $1.55, a 3,000% increase in just two years, and mobile revenue accounts for 62% of Facebook's total advertising revenue:

Investors have flocked to Facebook's shares over the past year as it's become more and more apparent that the company has become a mobile-first company in a mobile-first world. Facebook must do two things to justify this continued optimism: it must continue to grow its overall ARPU as its user growth rates continue to decline, and it must also continue to draw larger portions of that ARPU from mobile sources. If Facebook can do this, it will remain the premiere stock of the mobile era. If ARPU growth slows or even stops, Facebook's days heady share-price gains will be at an end.