Can Boardwalk recover from its massive sell-off anytime soon? 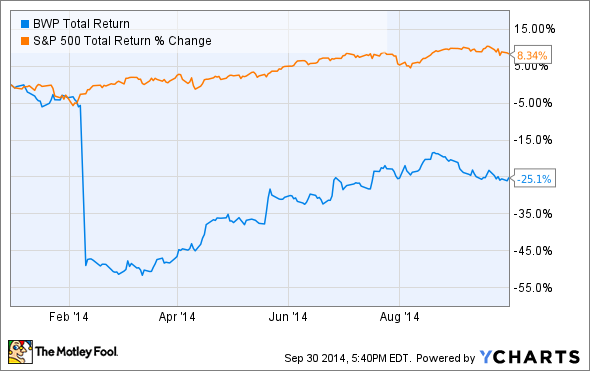 That chart says it all when it comes to shares of Boardwalk Pipeline Partners (BWP). All it took was one day to completely ruin any chance of the company keeping pace with the S&P 500 this year. So let's take a look at the factors that culminated in shares of Boardwalk dropping more than 40% in a day to completely ruin the year and whether shares today are worth a second look now that they're so cheap.

It wasn't the straw that broke the camel's back, it was the million underneath it

Just about everything that has happened results from the fact that the company committed the one cardinal sin of a master limited partnership: It cut its dividend. This wasn't a small trim, either. At the announcement of its first quarter earnings, management cut the dividend by more than 80% to just $0.10 per share, or what today equates to a yield of 2.13%. That day alone, shares of Boardwalk dropped more than 40% as investors looked for something with a greater yield.

So why exactly did Boardwalk take a meat cleaver to its distribution, anyways? The simplest explanation was that management had previously over-promised on its distribution payments and the company's portfolio of pipelines and storage terminals couldn't support it. The last quarter that it paid its former distribution, it had a distribution coverage ratio of 0.9, which means that the amount of money it was paying to its shareholders was more than what the company brought in through distributable cash flow. 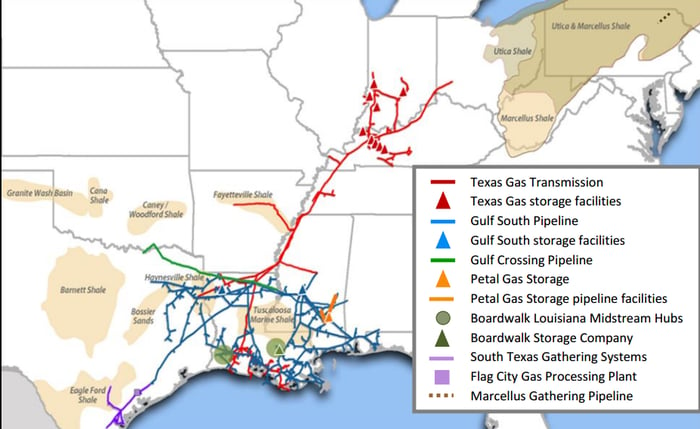 The second image shows the location of every major shale oil and gas formation in the United States.

The thing that becomes more clear when you look at these maps is that Boardwalk's assets were designed with the idea that the US would struggle to supply itself with natural gas, so systems such as the Texas gas transmission line was designed to bring natural gas to the Indiana/Ohio region from the Gulf. The only problem with an asset like that is that the Pennsylvania/Ohio region happens to sit on one of the nations largest natural gas fields, and the transmission of gas from there is considerably cheaper than shipping it up from Texas. Furthermore, the company has very few pipelines in place that could access these emerging sources of natural gas, so it couldn't just reverse the flow.

Finally, the company has been bound by debt limits so it couldn't just finance new projects with some new bonds. As a master limited partnership, one critical aspect is maintaining a decent credit rating to keep interest rates low, and one of the metrics that credit ratings agencies look for is a net debt to EBIDTA ratio of 4.5 times or less. Boardwalk was already teetering at this threshold, and any new debt would have most certainly put it over the top.

Considering all of these issues, Boardwalk's management decided to cut the distribution and use the excess cash to pay for its new projects such as the Ohio to Louisiana access project--which will reverse the flow of the Texas gas system and build an extension to the Utica shale formation. Once these types of projects have come online, hopefully the company can start to raise that dividend again.

What about buying Boardwalk today?

Because shares have crashed so much, there are some people who might think that shares of Boardwalk could be a good value today that will pay off once it starts to raise its dividend again. The idea does seem to hold water if you look at its valuation. Since it's a master limited partnership, we'll skip looking at price to earnings since MLP's don't technically retain earnings.

With shares at trading at such a discount, who can argue that it's not undervalued compared to its peers? The one issue with this kind of investing thesis, though, is that it may take a few years before the company starts to raise its distribution again. With it already at only a 2% yield, not many investors will have the patience to wait on shares of boardwalk and watch these other companies yield more than 3% and have a reputation of regularly increasing distributions.

2014 has been really rough for shares of Boardwalk. But with its lower dividend, management should be able to reinvest some of its excess cash in projects that will shore up the business as well as clean up the balance sheet. While there is no guarantee that these initiatives will work, they certainly seem much more sustainable than paying out more in distributions than what it makes. Overall, it seems unlikely that the company will struggle over the next few years, but it probably won't really thrive, either. In the meantime, it may be best to look into some other investments in the master limited partnership space that have a chance of performing well over these next few years and let Boardwalk put itself back on the right track before committing any large amounts of your portfolio to it.

Tyler Crowe owns shares of Enterprise Products Partners and Magellan Midstream Partners. You can follow him at Fool.com under the handle TMFDirtyBird, on Google+, or on Twitter @TylerCroweFool.

The Motley Fool recommends Enterprise Products Partners and Magellan Midstream Partners. We Fools may not all hold the same opinions, but we all believe that considering a diverse range of insights makes us better investors. The Motley Fool has a disclosure policy.