Income investors prefer a dividend with a long history behind it. That's because a substantial payout trail makes it easy to see just how management views its commitment to dividends in the face of competing spending choices such as acquisitions and share repurchases.

A decades-long dividend streak also gives shareholders confidence that the payout can survive over a range of business environments, from booms to busts and everything in between.

Kellogg's mixed dividend history
Payout histories don't get much longer than Kellogg's (NYSE:K). The breakfast and snack foods giant recently sent its 359th quarterly check to shareholders -- a dividend that stretches back to 1925. Kellogg's payout was boosted by 6.5% this year to $0.49 a share, or roughly double where it sat a decade ago. The stock currently yields just over 3%. 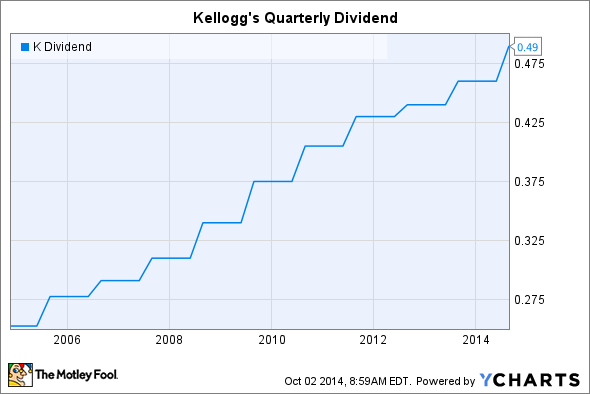 That payout history isn't particularly impressive, though, at least as far as branded consumer goods companies go. In fact, Kellogg's stock doesn't qualify as a Dividend Aristocrat because it can't claim an unbroken streak of 25 years of payout hikes. The company went through a period of several years ending in 2005 when it didn't raise its dividend at all.

In addition, the dividend's 7% compound annual growth rate, or CAGR, over the last decade isn't much to brag about. By comparison, Hasbro's dividend boasts a 10-year CAGR of 22%, and Procter & Gamble's CAGR has been 10% since 2004. 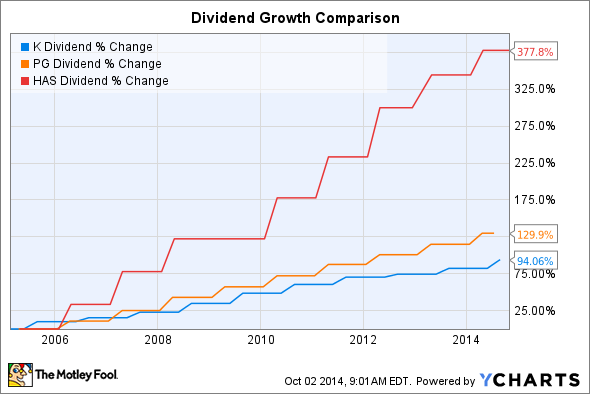 While Kellogg's payout traces its roots back almost 100 years, its recent growth profile isn't quite enough to stand as a top-tier dividend stock.

Weakening business trends
Business is trending in the wrong direction lately as well. Sales in Kellogg's biggest division, U.S. breakfast foods, fell 5% last quarter. Worse still, operating profit from that product line was down 20% through the first six months of the year.

The main culprit has been the sinking popularity of cereals among adults, who are turning to other breakfast options. CEO John Bryant said in a press release announcing Kellogg's latest results that the cereal business remained "challenging," but that "we believe we are making the right decisions to drive profitable revenue growth in the future." Those decisions include cost cuts and ramped-up investments in new businesses, including its recent Pringles acquisition.

Still, Kellogg in July lowered its outlook for the full year, saying net sales should drop by as much as 2%, with profit expected to fall by up to 3%. By contrast, management has targeted long-term sales growth of between 3% and 4%, and profit growth of between 7% and 9%. It fell short of those goals last year and will likely fall far short of them again in 2014.

Foolish takeaway
While those slipping results make it likely that Kellogg's dividend will continue its slow-growth trend, there's no real danger of a cut or pause in that payout. The company is on pace to generate $1.1 billion in cash this year after paying for all of its capital investments. That figure is on par with last year's results, and is nearly twice the $650 million in dividend payments Kellogg will send to shareholders over the year. With its payout well covered by free cash flow, and with business trends weak, Kellogg income investors should expect steady, unspectacular dividend growth ahead.