Microsoft (NASDAQ:MSFT) has shared the first details of its new operating system and the changes, it suggests, are so broad that it's not being given the sequentially correct Windows 9 name. Instead, seemingly because it's such a large leap forward from the not-very-well-liked Windows 8, the OS will be called Windows 10.

The decision is reminiscent of when Sylvester Stallone elected to call the most recent Rocky sequel Rocky Balboa in order to remove any numerical association with the only clunker in the boxing series, the previous installment in the Rocky series, Rocky V. The Windows name change makes a symbolic point -- this is not an improved Windows 8, but something wholly new, which won't matter at all if the product does not fix the mistakes of the one it's replacing.

The change in names and bold strategy essentially involve apologizing for Windows 8 while keeping some of its better features and returning some that were dropped. These moves are an attempt to protect what has been a resilient product for Microsoft. Despite the rise of alternative computing devices such as tablets running Google's (NASDAQ:GOOG) (NASDAQ:GOOGL) Android or Apple's (NASDAQ:AAPL) iOS, the Windows Division has remained a huge revenue producer for Microsoft.

Microsoft has not announced pricing or an on-sale date for the new Windows, but before it does it should consider doing something radical. In order to protect that franchise, Microsoft should take a page from Apple's book and the Windows 10 upgrade should be made free for anyone who owns a Windows 8 machine.

That move might cost the company some revenue in the short term, but it would create enormous goodwill and ensure that customers make the switch. Ultimately, that would create larger sales opportunities down the road, which could protect the roughly $19 billion in yearly revenue shown in the chart above. 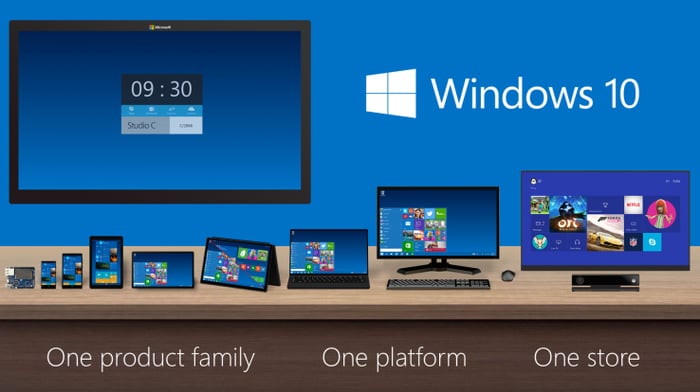 This screenshot of the Windows 10 preview page shows Microsoft's philosophy for its new OS. Source: Microsoft

Apple made its last OS update free
When Apple released the latest version of OS X (10.9, Mavericks) last year, it was a free update in the Mac App store. Anyone who had the previous version (Mountain Lion) installed qualified for a free upgrade. Installing it was a simple process that maximized the amount of people running the latest version of the OS rather than an opportunity to squeeze dollars out of its customers.

This explains why according to NetMarketShare, as of September, while Microsoft dominated the operating system market for traditional computers, its share was split among five iterations of its OS. Windows 7 led the way with 52.71% of the overall market while Windows XP holds a 23.87% share, Windows 8.1 has 6.67%, WIndows 8 has 5.59%, and the reviled Windows Vista still has 3.07%.

Apple's OS X 10.9 only held 4.05% of the overall market, according to that data, but no other Apple OS made the chart that accounts for 97.6% of all operating systems.

There are significant benefits to having most of your customers using one version of your OS. Support costs are lower, it's easier for partners to develop software, and you never run into the sort of mess Microsoft did when it stopped supporting XP despite the huge number of people still using it.

People really didn't like Windows 8
Windows 8 was ahead of its time and it made people uncomfortable. The OS borrowed heavily from the way people interact with tablets while taking away many of the navigation features they had grown accustomed to over decades. It was also an OS designed for touchscreens and the majority of people using it did not have that technology.

The concept behind Windows 8 was correct, but a little ahead of its time, and the execution was awful. Microsoft gave people what it thought they should want rather than what they actually wanted.

Everyone thought the Start menu was going to be a Win 8 update
Though Windows 10 is a major change from Windows 8, many of the updates -- including the return of the Start Menu -- were originally promised as future updates to Windows 8.

In an April speech at Microsoft Executive Vice President Terry Myerson confirmed the return of the beloved menu, though he did not specify when or in what version of Windows it would be reinstated. "And we're going to enable your users to find, discover, and run your Windows applications with the new Start menu," he told the room full of developers.

Though Microsoft never confirmed a return of the Start menu as an update to Windows 8, there was rampant media speculation and even some disappointment when it was not part of the two major Windows 8.1 updates.

Microsoft needs to do the right thing
When a company does something that annoys its customer base -- even if it was done with the best of intentions -- it should offer to make things right. In this case, Microsoft released an OS that was hard-to-use on non-touch devices that took away features its customers liked. It then ran a full-tilt marketing plan to coerce users to switch -- including dropping support for Windows XP.

Because it pushed so hard and failed to meet expectations so badly, Microsoft needs to make it right by allowing Windows 8 users to upgrade for free. If your local pizza place changes its pepperoni and a regular customer does not like it and asks for sausage instead, the pizzeria brings the new pie free of charge. That turns a bad experience into a good one and sends the customer out the door happy.

Microsoft needs to follow that model even if it means writing off the cost of a few million pizzas.