A look at what NVIDIA's automotive chip opportunity might be worth.

NVIDIA (NVDA 1.25%), which specializes in graphics-related processors, on Wednesday announced that the 2015 Honda Civic, Civic Tourer, and CR-V will feature the company's Tegra processors. These processors will provide the brains behind the in-car audio and information systems found in the cars.

While this announcement isn't a big deal in and of itself (NVIDIA has already publicly announced its goal to ship 25 million processors over the next five years for use in vehicles), it's a good springboard for some deeper discussion of the company's automotive ambitions.

NVIDIA's software focus is showing
NVIDIA's analyst day presentation featured a segment on the company's automotive-related business. One point made in the slide deck was that "the modern car is becoming an extremely powerful visual computer" and that "within the next 10 to 15 years, every car will need one."

This is all well and dandy, but what I found particularly interesting as I dug deeper into NVIDIA's automotive related analyst day slides, is the following line from the presentation: "Car makers need a car computer platform partner, not a chip supplier. [emphasis by NVIDIA]"

To support this point, NVIDIA said about 80% of the research and development that goes into building an in-car computer is actually "software engineering & expertise."

This could suggest that design wins are fairly sticky in this market, particularly if there's significant collaboration between NVIDIA and its customers on the software side of things for each in-car computer system that NVIDIA's chips power.

Further along in NVIDIA's analyst day automotive business presentation, the company suggested that it sold approximately 4.5 million chips into the automotive market cumulatively through fiscal 2014. A look at the chart indicates NVIDIA sold about 2 million automotive-focused units during fiscal 2014. 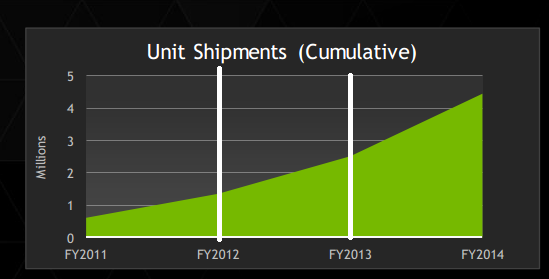 From these numbers, the implied average selling price per automotive solution is $49.75. This suggests that over the next five years, NVIDIA is poised to generate approximately $1.24 billion from automotive chip sales. These sales probably carry higher gross margin than traditional smartphone and tablet Tegra products, particularly as much of the value of the solution reportedly comes from software.

Is automotive a game changer for NVIDIA?
A $1.24 billion opportunity over five years indicates an average of $248 million in annual revenue (keep in mind that the actual contribution will be lower earlier during those five years and the run rate exiting those five years will be higher).

This isn't enough to support Tegra on its own, but it does make getting to breakeven against a $400 million annual Tegra R&D investment meaningfully easier than trying to do it with tablets and phones alone.

Foolish takeaway
Automotive is an interesting opportunity that I suspect will go a long way to getting the company's Tegra division to at least breakeven. It will be interesting to see how much tablet market share NVIDIA can gain with its Tegra processors, and I suspect that NVIDIA will aggressively target "nontraditional" computing opportunities such as Android TVs and set-top boxes with Tegra.

Ashraf Eassa has no position in any stocks mentioned. The Motley Fool recommends Apple and Nvidia. The Motley Fool owns shares of Apple. We Fools may not all hold the same opinions, but we all believe that considering a diverse range of insights makes us better investors. The Motley Fool has a disclosure policy.