Taking a good hard look at the numbers for Transocean.

There are many reasons that we invest in certain stocks. It might be that the company holds an advantage in a certain market, or that management has a solid reputation, or it could simply be that we use and enjoy their products. While all of these justifications are nice, ultimately the success of an investment will come down to buying something that is going to generate a return on your investment. This means that from time to time we need to really drill down into a company by looking at some important financial ratios.

So let's get down to brass tacks and look at the performance of Transocean (RIG 5.93%) in comparison to its peers in four key areas: growth, margins, returns, and valuation

Growth
Growth is pretty self-explanatory. Some argue which type of growth -- sales, earnings before interest, taxes, depreciation, and amortization (EBITDA), or earnings per share -- is most important depending on the sector, but ultimately the one that is going to result in a return for shareholders is earnings per share -- or EPS -- growth. In a business such as owning rigs, there can be lots of variation from quarter to quarter if a company has rigs that need maintenance. So to help smooth out the results let's take a look at the compound annual growth rate for Transocean and its peers for the past three years.

These figures are all over the place for just about everyone involved. In the case of Transocean, it has modest sales growth and even better margin growth -- which suggests it has also been able to control costs. Though we can't calculate a compound annual growth rate for Transocean's earnings per share, know that it has transitioned from a loss in 2011 (stemming from impairments and payments related to the Deepwater Horizon oil spill) to a net income margin today at about 19%. This is slightly encouraging, but also keep in mind that the rig market is expected to be brutal for the next year or so.

Margins
One of the challenges for rig companies is that their margins are affected by the spending habits of their customers. When oil and gas exploration and production companies aren't in the mood to spend on new ventures, it can result in big declines in contract rates for these companies. One of the ways that rig companies can mitigate this issue is through the composition of their respective fleets. Those with newer rigs that are designed to handle more challenging and complex jobs and that require less downtime for maintenance will likely garner a higher dayrate, which normally means higher margins.

When you look at these numbers, it's pretty easy to guess which company has the youngest fleet -- Seadrill -- and the oldest  -- Diamond Offshore. Transocean is stuck somewhere right in the middle. While it has a very expansive fleet of newer rigs that garner high contract rates, it also has a sizable fleet of older rigs that drag on profitability. As the company starts to sell, spin off, or even retire these older rigs, Transocean could see some further boosts in profitability as it has seen over the past three years.

Return
Ultimately, having sales growth and good margins is nice, but the thing that really matters is that the company can generate returns for shareholders. One of the most cut and dried ways to look at this is the return on equity. The easy way to look at this is to simply divide net income by total equity, but this simple calculation can mask certain issues, such as companies juicing their stats with lots of debt. So instead let's look at return on equity based on the model built by chemical manufacturer DuPont, which breaks up the components of return on equity into five components and multiplies them together. Here are those factors: 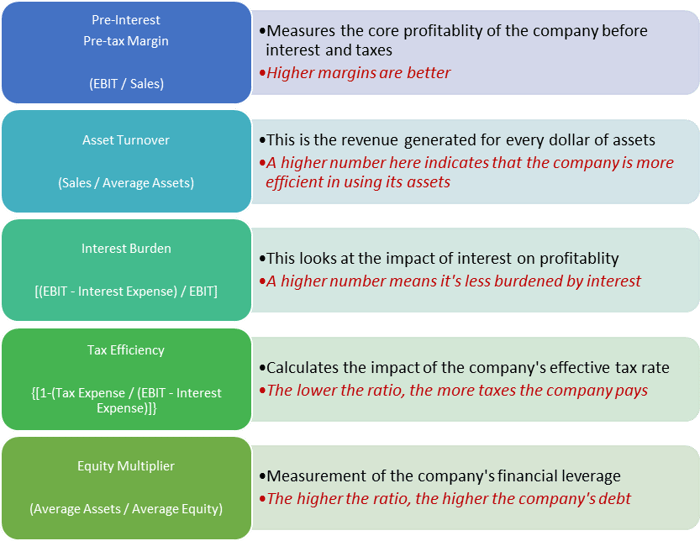 Based on this breakdown, this is how Transocean stacks up against the rest.

Despite the fact that all three companies got there in a different way, Seadrill, Ensco, and Transocean all have identical returns on equity over the past 12 months. In the case of Transocean, it got there because it has a higher asset turnover -- which suggests that it has older assets than its peers' that have been depreciated over time -- and a better tax efficiency while suffering from weaker margins than Seadrill and Ensco. This is one of those things that goes to show that higher margins do not necessarily constitute a higher return.

Valuation
With a better picture of what the company looks like, let's take a look at what the stock looks like. The most common valuation metric for any company is the price to earnings ratio. Since earnings per share can be affected by nonoperational things such as asset impairments and one-time sales, though, let's also look at one metric that is a little more indicative of operational performance, total enterprise value to EBITDA. The difference between price and total enterprise value is that price only represents the market capitalization of the company, while enterprise value represents market cap plus debt. Also, for the sake of perspective, here are the 10-year-average valuations for each of these companies.

*Note: Seadrill was established in 2005, so all historical valuations only go back nine years. Source: S&P Cap IQ

Trying to make sense of these numbers is really tough. By most accounts all of these companies are selling at massive discounts to their historical average, but those averages are also heavily affected by the fact that everyone went nuts in 2005-2007 when the thought was that oil prices were going to be in the $200 range by now. Since EPS for these companies has been so wacky, let's focus on TEV/EBITDA. In this case Transocean is the cheapest of the bunch. Part of this probably has to do with the fact that it does have that older fleet it needs to address, but considering that it's trading for less than Diamond -- which has even larger problems with its fleet -- Transocean's stock looks pretty cheap.

What a Fool believes
I'm not going to lie: Someone that is looking at investing in the rig market today better have a really strong stomach, because the next year or so is expected to be rough for everyone. Lots of newly built rigs are becoming available, but those with older rigs are quite ready to let them go. This will likely mean that contract rates will decline, and many rigs may go without a contract.

However, if you have a longer term investing horizon and can afford to take some pain over a couple years, it could be an amazing buying opportunity since shares of Transocean and several of its peers are so cheap. As a consolation prize as you wait for the market to turn around, you can just let Transocean's 9% dividend yield buy more shares at a discount.