Tesla Motors (NASDAQ:TSLA) plans to more than double its workforce in Hong Kong to more than 100 people by the end of the year, according to a recent press release on the Hong Kong government's website that quotes Tesla's vice president of China operations Veronica Wu. This expansion is due to anticipated increased demand for the Model S and significant initial demand for the Model X in Hong Kong, a largely autonomous area that's a Special Administrative Region, or SAR, of the People's Republic of China.

It often seems to fly under the radar that Hong Kong was and remains a pivotal component of Tesla's strategy to electrify the roadways of China. The electric carmaker began taking pre-orders from Hong Kong buyers in July 2013 -- and received more than 300 in that month, despite the fact that pricing hadn't been established -- a month before it started taking pre-orders in mainland China.

I've previously written about three reasons Tesla is likely to spark Teslamania in China. However, I didn't touch upon Tesla's strategy of leading with Hong Kong to help conquer the extremely important Chinese market. Here are three reasons this is a winning plan.

1. Hong Kong is quite wealthy

Surely, a fair number of Hong Kong's 7.2 million citizens can afford to shell out some big bucks for a Model S or X, as Hong Kong has one of the highest per capita incomes in the world: $53,203 in 2013 (based on purchasing power parity), according to the World Bank. That's just a hair lower than Switzerland's $53,672 and well ahead of that of the highest-ranking European Union country, Austria, at $44,149.

While Hong Kong residents still need deep pockets to buy a Model S, those pockets don't need to be as deep as they'd usually need to be to purchase a luxury vehicle. This is thanks to Tesla's principle of treating consumers in all countries equally by pricing the Model S globally on par with its U.S. price, excluding any unavoidable fees. And thanks to Hong Kong's government, buyers' pockets can be shallower than those of customers living in mainland China because there are no hefty import fees or sales tax. Furthermore, Hong Kong's government threw Tesla a bone as the Model S received "the first registration tax exemption for electric vehicles in the city," according to Tesla spokeswoman Wu.

Another factor relates to Hong Kong's wealth and status as a leading financial center: power. Like mainland China, Hong Kong has a huge air pollution issue. I think it's likely that some of the elite living in this SAR will not only embrace Tesla's high-end EVs -- because they don't need to give up status or luxury to do so -- but also exert their influence in mainland China for the country to clean up its dirty air, much of which certainly billows down to them. This could possibly help Tesla's vehicles qualify for China's EV subsidies despite not being made in the country, or could take some other form that could help Tesla.

Hong Kong has a population of about 7.2 million over its 426-square-mile land mass. To put that in perspective, New York City's 8.3 million residents are clustered in its 303 square miles. So, people are packed in nearly as tightly as they are in the Big Apple.

I believe that the "range anxiety" issue is overblown in the U.S., given that the P85 Model S gets 265 miles per charge, though it's certainly a legitimate concern for some. However, the fear of running out of a charge and not being near somewhere to juice up should be as close to a nonissue as possible in Hong Kong, due to its small geographical size and urban nature.

Model S owners in Hong Kong can currently charge up at two Supercharger sites, though Tesla plans to greatly increase coverage in Hong Kong -- as well as in the entire Asian region -- by the end of 2015. It looks like Tesla has plans to have a total of nine or 10 Superchargers in Hong Kong (which is on the southern coast of China) by 2015. 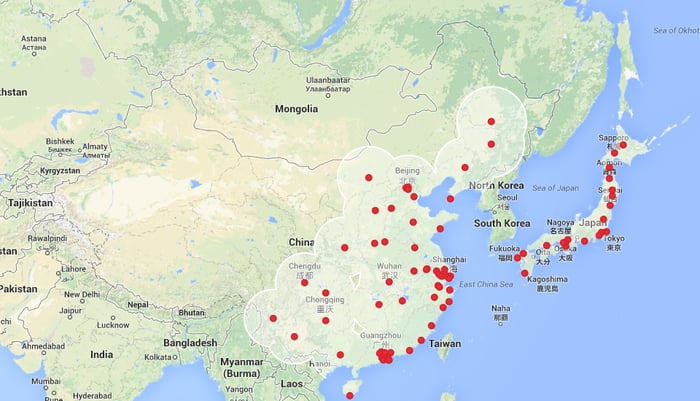 3. Hong Kong is a trendsetter in the region

This is the most important reason, in my view, with the first and second reasons simply playing a supporting role.

In many ways, Hong Kong is to mainland China as California -- and perhaps New York City, in some respects -- is to the United States. Products and styles that become popular in affluent Hong Kong often gain a following among the people in mainland China. So, anything Tesla can do to continue to win favor with Hong Kong consumers should help in its sales efforts in mainland China, a country that's going to be an ever-increasingly key factor in Tesla's success going forward.

It's too early in the Hong Kong and China game to state anything definitively, though investors will soon learn more about how eagerly the region is initially embracing the Model S when Tesla reports Q3 earnings in a month. However, given Tesla's smart "lead with Hong Kong" strategy, its already speedy buildout of Superchargers in mainland China, and its recently announced partnership with China's No. 2 mobile carrier China Unicom to install charging stations at 400 China Unicom stores in 120 cities, it seems Tesla is on track to electrify the roadways of China.