Virtual computing veteran VMware (VMW 0.16%) is having an interesting 2014, to say the least. Shares raced sky-high in the first quarter, driven by analyst upgrades and the strength of its vSAN virtual storage networking product. Then the stock fell back to Earth due to a soft earnings guidance update, and activist investor firm Elliott Management started looking for a way to separate VMware from majority owner EMC (EMC). 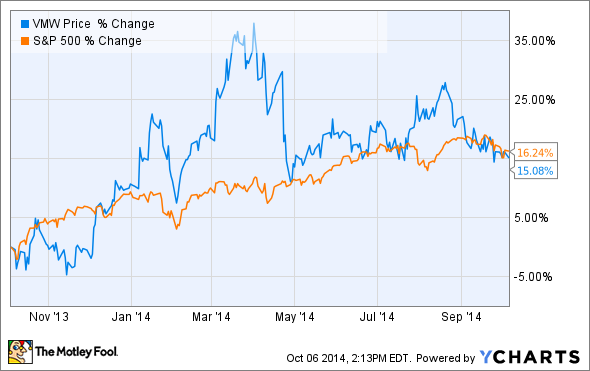 Today, with VMware's next earnings report about three weeks away, the stock is supported by several potential catalysts and held down by multiple threats. To get some more clarity in this stock's baffling situation, I dug through VMware's latest earnings call in search of executive insights.

These are five of the most instructive observations I could find.

"We are in the early stages of tectonic shift, transitioning from the previous client server platform to the mobile cloud era. Every customer I meet feels like the pace of technological change is faster than ever before. Software is being used to efficiently manage companies. This has become the heart and soul of new companies, and new ventures within existing companies.

"Customers are realizing the dramatic benefits of the new software-defined model for IT, and VMware delivers exactly that. By making IT dramatically more fluid and automated, we ensure that customers can boldly deliver the apps that deliver revenue, differentiation, and loyalty -- faster and more reliably than ever."

This is Gelsinger outlining the size of the market opportunity he sees in front of VMware. He's not the first IT executive to highlight the value of increased automation and software-based controls, and he'll hardly be the last.

This, of course, also means VMware faces unprecedented amounts of competition in the virtual-anything markets. The runway ahead is both long and bumpy.

"Our network virtualization platform, VMware NSX, gained significant momentum in Q2. Being in the [software-defined networking] market for only two years and only since October with NSX, we are pleased to say that our networking business is now at a greater than $100 million total annual sales run rate with currently over 150 paying customers and traction across all geographies and verticals.

"We are closing key architectural wins as customers look to transform their networking operations, in a similar way they did with compute to the use of vSphere and server virtualization. As we look to move beyond the first hundred customers to the next thousand, we are broadening the NSX sales channel through the addition of NSX to VMware's price list, and increased channel-enabling activities.

"This is a decade-plus opportunity for VMware. Contrary to what you may have heard from other vendors, this momentum is real and traction is occurring right now. Our customers are embracing our NSX solution, not only as a network virtualization platform but as a network security one as well."

"Decade-plus opportunities" are exactly what long-term investors are looking for. If software-defined networking, often shortened to SDN, can deliver on Eschenbach's growth promises, VMware will have another rock-solid business platform for the long haul.

However, this proposed growth driver has its fair share of critics, too. Last year, Cisco Systems (CSCO 0.50%) CEO John Chambers took a direct shot at VMware's SDN business in a Barron's interview.

"Nobody has proven [VMware's SDN unit] Nicira can scale," he told reporter Tiernan Ray. "How many do they have in production? Very, very little. Less than $10 million in revenue."

This town is big enough for the two of us

"What customers are seeing is the power of the software-defined data center strategy. Use cases like microsegmentation really show the power of this approach, things that literally cannot be achieved by any other approach, delivering radical improvements in the security of applications and east-west traffic flow efficiencies.

"That said, we love Cisco gear. We don't need them to lose and many NSX customers are using it. So we really see this as an opportunity for customers to take advantage of a new network virtualization technology, and we are out to win in that game and do it on the best gear that's available in the industry."

Even so, VMware doesn't mind sharing the stage with Cisco. The IT equipment market is large enough to keep many rivals in circulation. And it's always better to provide great performance when hooked up to other vendors' equipment than it is to lock everything down to your own exclusive solutions.

IT buyers can smell those lockdowns from a mile away. Gelsinger would rather focus his energies on winning in the open market than on throwing dirt at competitors like Cisco. It's the right thing to do from so many perspectives.

"As expected, approximately 88% of our unearned revenues will be recognized ratably over future quarters. The unearned revenue mix is in line with prior periods, and is primarily a reflection of our strong support business. It's important to note that the participation in renewal rates for our support business remains high and the customers enjoy significant ongoing value from VMware, including all future product updates and upgrades.

"In effect, this model has a great combination of perpetual license business with the ongoing revenues and cash flows associated with the subscription, the future upgrades and updates."

Unearned revenue is growing quicker than generally accepted accounting principles sales, which rose 18% year over year in the second quarter.

This means that many VMware customers are prepaying for long-term support and service contracts. VMware collects the cash up front, but can't claim these payments as GAAP revenue until the related products and services have been delivered.

In other words, VMware is building up a growing platform of guaranteed revenue in upcoming quarters and fiscal years, where the cash has already been collected. It's great for sales visibility, and a hallmark of companies whose customers are loyal for the long haul.

Going big in the Far East

"We continue to rapidly expand the global footprint of our vCloud Hybrid Service. Last week I was joined by Ken Miyauchi, CEO at SoftBank, to announce a joint venture in Japan, which launches our first vCloud Hybrid Service in Asia. The service will go live in Q4 and is already available as a private beta.

"I was also joined by Yang Jie, General Manager of China Telecom 's cloud computing branch, to announce a partnership for China Telecom to provide hybrid cloud services for the China market be available in early 2015."

The other hot product in VMware's arsenal is the vCloud private cloud platform.

Elsewhere in the same call, Eschenbach noted that roughly half of the company's enterprise license agreements contain a vCloud element. Gelsinger also clarified that vCloud is a big deal in every market, with 4,000 resale partners on tap by the end of 2014. VMware cloud services will then be available in more than 75% of the global cloud market.

The Asian expansion is a critical element in this expansion of VMware's private and hybrid cloud services. If anything, I'm shocked to see the Chinese and Japanese introductions arriving this late. It's only a matter of time before China outgrows the world-leading American economy, with IT equipment markets sure to follow suit.