Will Intel actually deliver what it promised last year?

At Intel's (INTC -1.41%) 2013 investor meeting, the company announced that it would launch a product known as Broxton that would offer "leadership performance for hero devices" in 2015. This, to me, was a long-overdue breath of fresh air as the company's mobile chip designs to date have been disappointing from both technical and time-to-market perspectives.

However, when Intel failed to mention Broxton at its annual developer forum, the speculation ran rampant. SemiWiki's Daniel Nenni speculates that the project might be cancelled altogether, yet others believe the chip may simply have been delayed into 2016.

To that end, I decided to do some digging.

It's probably not cancelled
I checked out LinkedIn and stumbled across the profile of a design intern who claims to have been working on the Broxton system-on-chip since Aug. 2014.

Interestingly enough, I ran into a profile of another intern who claims to be working pre-silicon validation of the chip. The intern's profile states that she started at Intel in May 2014 and that the work she had been doing was "preparing for Broxton's PowerON," which suggests that the design was perhaps a few months away from making it to first silicon.

From the two profiles, I would think Intel moved Broxton into post-silicon validation (i.e. making sure the chip works as intended in real life) in around the June/July timeframe.

In addition, I see Intel engineers on LinkedIn already working on different flavors/variants of the Broxton SoC, so my hunch is that the project is not cancelled.

Is it delayed?
At the Intel Developer Forum, a couple of folks from the company's technical marketing team gave a presentation on the future of Intel's Atom-based tablet chips. The presentation was light on technical details (the average rating for the session was 1 star out of 5) and, more troublingly, did not include Broxton on the roadmap (reproduced below) for 2015: 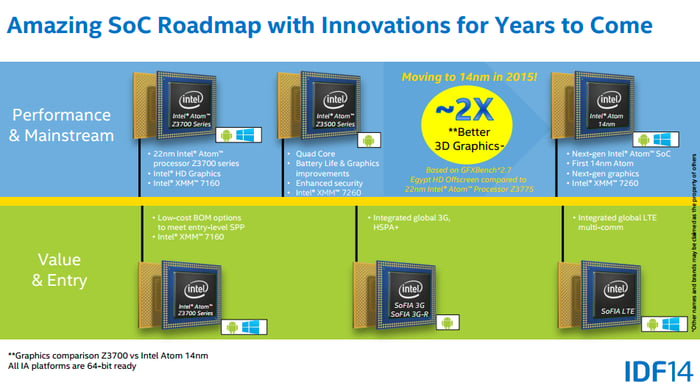 Now, two things could be going on here. First, the roadmap may simply only show products appearing in the first half of 2015, with Broxton showing up during the second half of the year. Or, more troublingly, the project may actually be delayed into 2016.

If Broxton is delayed, then Intel may yet miss the mobile mark
A big part of the frustration on the part of Intel shareholders is that Intel's products tend to come out "too little, too late."

Further, if Broxton is released in 2015, it is likely that Intel enjoys a pretty substantial manufacturing technology lead. However, if the part comes in 2016, then that manufacturing gap narrows pretty meaningfully as Taiwan Semiconductor's and Samsung's customers ramp their own 16-nanometer and 14-nanometer products, respectively.

Why this is such a sore point for investors
I have argued pretty vehemently that Intel should continue to press on in the mobile chip business. However, given that the company is annualizing a roughly $4 billion per year loss as a result of extremely high research and development spending, investors should not only expect, but they should demand, more detailed clarification of how Intel plans to succeed in this market.

I very seriously doubt that the problem here is one of engineering talent; I'm sure Intel has plenty of it. Could it be that the company's marketing team (which, from what I understand, drives the specifications of these chips) simply has a poor understanding of what its OEM customers actually want in a smartphone platform? Or does Intel specify chips properly but then cannot execute in getting them to market quickly enough to be relevant?

This should be a very serious discussion topic at Intel's investor meeting this year.

Foolish bottom line
It doesn't seem to me that Broxton is cancelled; engineers seem to be actively working on the project. However, given that Intel did not mention it at its annual developer forum this year (but did mention Skylake), let alone show it, I am led to believe that the project may be behind schedule.

If this is indeed the case, I now wonder how competitive the part will actually be when it finally hits the market.