Investors seem to be getting more and more worried about ConocoPhillips as oil prices slip.

If we had checked in with ConocoPhillips (COP -2.44%) just a few months ago, we would be talking about how 2014 was a banner year for the company and what a great job it has done unlocking value for shareholders.

If we look today, though, we see that the company is now just about keeping pace with the S&P 500 on the year. 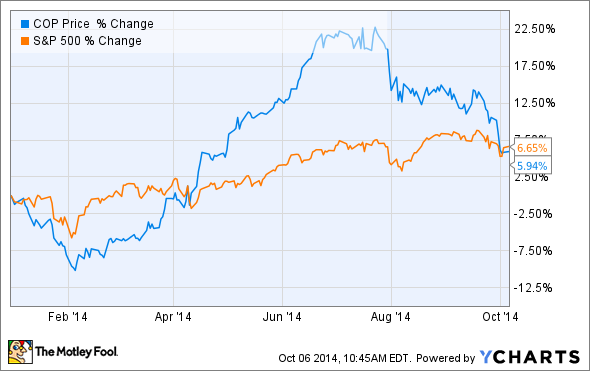 So what gives? Did something happen at the company that made investors turn sour, or has it been largely factors that are out of ConocoPhillips' hands? Let's take a look at what has made ConocoPhillips' stock path resemble the flight of Icarus and whether this is the kind of thing we can expect from it in the future.

Live by the oil price, die by the oil price
After ConocoPhillips decided to part ways with this transportation and pipeline business segments with the spinoff of Phillips 66, one side effect has been that the company is much more dependent on the price of oil to be successful. With the other components of the business in place, it could shield itself from weak oil prices because this led to cheap feedstock for its refineries. Today, though, any major swings in price can mean huge differences in profitability. According to the company's fiscal year 2013 earnings report, a $1 change in the price of a barrel of oil can have as much as a $90 million impact on annualized net income for the company. 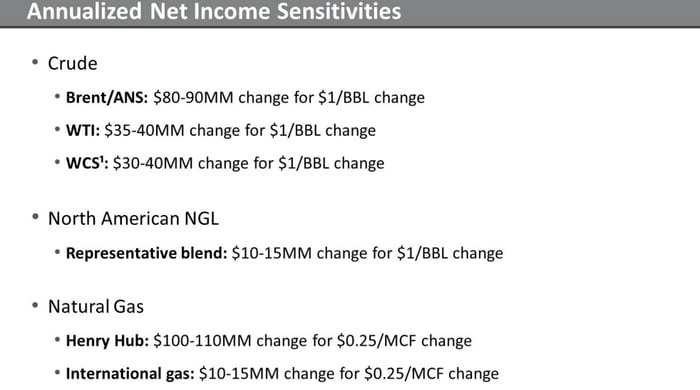 Knowing how sensitive ConocoPhillips is to the price of oil, it shouldn't be as much of a surprise that shares have acted the way they have after looking at the price of oil so far this year. 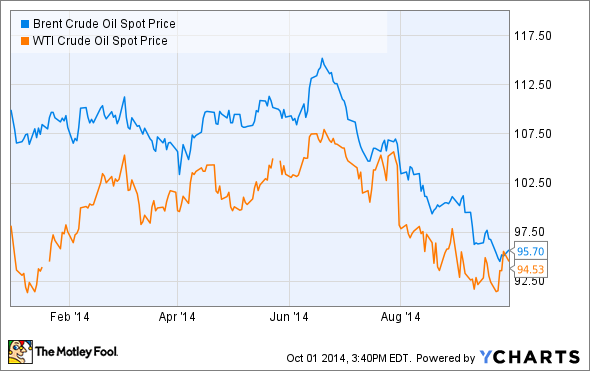 However, not everything is rotten in the state of Denmark. Despite what we can assume will be declining margins resulting from weak oil and gas prices, the company itself has been able to increase profitability by unloading some higher cost per barrel assets. This past quarter, the company was able to achieve a greater than $29 cash margin per barrel, an 11% improvement over the year prior.

There are no promises that it will be able to achieve similar margins this coming quarter considering the sharp drop-off in oil prices, but management has made a very commendable effort to increase profitability the only way it can.

Looking past oil prices
There isn't much that you as an investor can do about oil prices; it's just the nature of the breast when you are investing in exploration and production companies. What you can do, though, is look for certain favorable traits that suggest the company is doing the right things to remain profitable no matter the business climate. In the case of ConocoPhillips, it does have quite a few things working in its favor. One of them is that the company's unconventional -- aka, shale -- oil and gas drilling has some of the lowest breakeven prices in North America. So as some companies start to wind down production because of lower profitability, ConocoPhillips can keep the taps on longer. 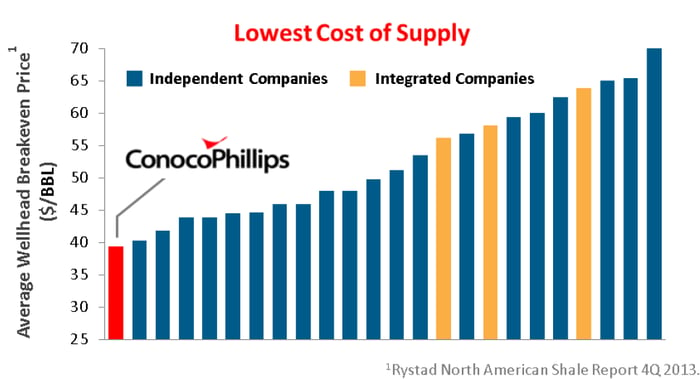 The other aspect that looks rather promising for ConocoPhillips is that the company is looking to dedicate a large portion of its portfolio to very long-term cash generating assets such as oil sands and LNG. Combined, these two forms of production, which require lots of upfront capital but considerably less when up and running, represent over a third of the company's reserves. Not only should this help to generate a steady base of cash flow, but it will also help to slow decline rates of production across the company. These two things will go a long way in shielding the company from the full wrath of price swings over time.

What a Fool believes
Investing in oil and gas producers is a pretty precarious thing in the first place. So as we watch oil prices fall with the surging supplies from the U.S. and the waning demand across the world, producers are going to bear the brunt of the pain. ConocoPhillips is no exception, but it is in a position to pull in profits longer than others with its lowering costs and its growing portfolio of long life assets that will require less continuous capital investment. With the company trading at 11.5 times its earnings -- which is still above its 10 year historical average of nine times earnings -- it's not a bad time to think about buying shares, especially since it offers a 3.9% dividend yield. Still, sitting on the sidelines a little longer could give you a more opportune time down the road.