Please ensure Javascript is enabled for purposes of website accessibility
Log In Help Join The Motley Fool
Free Article Join Over 1 Million Premium Members And Get More In-Depth Stock Guidance and Research
By Chris Walczak – Oct 7, 2014 at 8:59AM

Simon Property Group just had a great quarter, but the real estate company is exposed to risks through its tenants and the economy at large.

Simon Property Group (SPG 0.91%) is the world's largest real estate company. The operator of malls and outlets is fresh off a strong quarter and a stellar five-year run since the depths of the financial crisis. There is a lot to be encouraged about with this company, considering how well it's executing, but there are potential risks lurking. Here are three issues that could send the stock lower.

1. Two struggling tenants, who together occupy 13% of its US rentable space, are closing stores.
Simon Property's success is highly dependent on the success of its business partners -- i.e., tenants -- and the whole economy in general. Simon Property Group had to cut the dividend 25% in 2009 to weather the financial crisis, but as the economy and consumer spending have come back, so has Simon Property Group.

But not all of Simon's partners have come back with the economy. Retailers J.C. Penney and Sears Holdings combine to lease over 13% of Simon Property Group's property.  While not necessarily on the verge of bankruptcy, these companies are struggling with sales and closing stores.

The stock performance of the two companies versus the S&P tells the story. 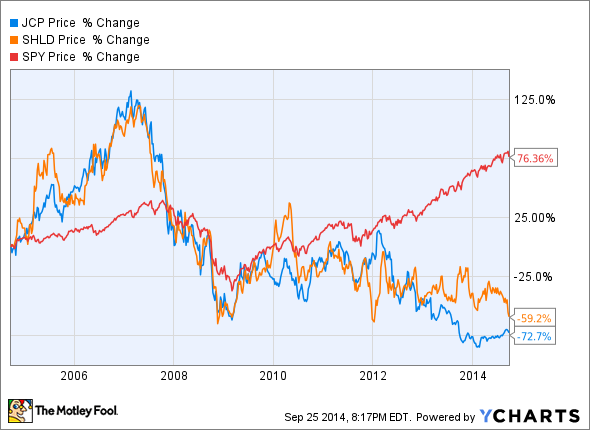 Sears in particular, is closing stores rapidly; it has already reduced its store count by 10% since 2011!

The risk that a specific tenant will go bankrupt can be mitigated by diversification, and SPG has done very well to not be too reliant on any one tenant for income. Even J.C. Penney and Sears together make up only 0.5% of SPG's base minimum rent.

However, a bankruptcy by a big tenant could be especially harmful, as there aren't many companies that are able to fill the space of a huge anchor store. That space could take months or years to rerent or may require a huge investment to turn those locations into smaller, more manageable storefronts.

2. There is already evidence of struggling sales throughout its properties
The quarterly conference call's one tense moment was when analysts started questioning why sales per square foot fell from $612 last year to $608 this year in the company's US malls and premium outlets. This disappointing result isn't a one quarter blip either. Although sales per square foot rose in Q1, going from $575 to $576 is a rounding error away from 0% growth.

CEO David Simon tried to defend the sales number on the call.

I don't want to call it the decrease because it (sales) really didn't decrease, the movement from $612 to $608 was really a function of adding additional space. And as I mentioned to you the comp sales were actually up 90 basis points which would ignore that impact.

Whether or not sales technically fell or grew less than one percent is immaterial. Disappointing sales could lead to trouble raising rents in negotiations with tenants.

In addition to just collecting rent, SPG has another direct economic interest in most of its tenants. When a store hits a certain sales threshold, Simon can be entitled to a bonus called "overage rent." Weak sales means that the $223 million SPG collected in overage rent in 2013 could be at risk.

3. Simon Property has a significant exposure to Europe's struggling economy
If only the United States economy was the only one SPG had to worry about. Simon's 2013 10-K reveals the company went on a European spending spree to add to its already significant real estate holdings.

In 2013... we acquired noncontrolling interests in five operating properties in Europe through our joint venture with McArthurGlen. Of the five properties, two are located in Italy and one each is located in Austria, the Netherlands, and the United Kingdom. Additionally, as of December 31, 2013, we owned a 28.9% equity stake in Klepierre SA, or Klepierre, a publicly traded, Paris-based real estate company, which owns, or has an interest in, shopping centers located in 13 countries in Europe.

SPG's $2 billion stake in Klepierre and its joint ventures means the company has broad exposure to the European economy. Europe's economy has managed to stop contracting but is still sputtering with GDP growth hovering just barely in positive territory. Although SPG's international operations contribute less than 10% of the company's net operating income and Europe's percentage is smaller still, the company made some big bets on the European consumer and the European economy improving. If the region's economic doldrums continue, falling revenue and possible asset writedowns could send SPG's share price tumbling.

Foolish final thoughts
Despite laying out three negative concerns around Simon Property Group, it's not a sure thing the stock will fall. Simon Property Group is benefiting from a growing U.S. economy and more confident consumers, so there is plenty of reasons to think that the stock could rise instead of fall. But when researching a company, determining what could go wrong is an important part of the analysis, and SPG has several real risks that could derail the stock.