The most recent jobs numbers from the Bureau of Labor Statistics were good news: Unemployment now sits just below 6%, the lowest level since the 2008 recession. And workers had already noticed what the BLS report made official. A newly released Glassdoor/Harris Poll survey of working American adults, taken in early September, found that 47% of those surveyed were confident that they could find a good new job in the next six months. The poll also found that 44% of surveyed workers expect a raise or cost of living pay increase over the next year, and that one-third of workers said their employer had undertaken a major hiring initiative over the past half-year.

Time to move on?
Numbers and attitudes like these indicate that the economic recovery is moving past the point where workers are just grateful to have a job and are open to the possibility of making career moves -- perhaps especially if those pay raise expectations don't pan out. 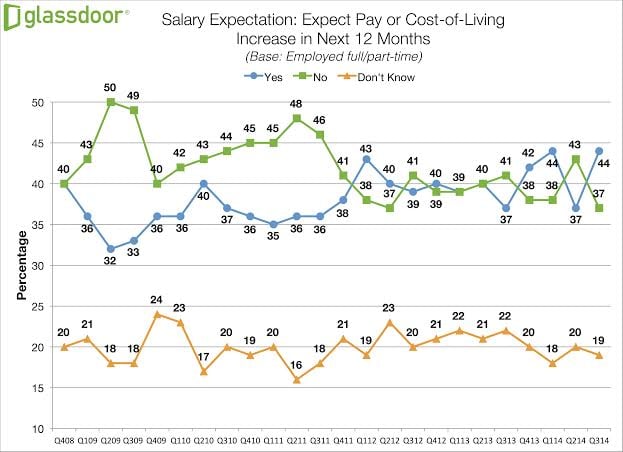 Still, the numbers break a bit differently depending on who's answering the questions. According to Glassdoor, the men surveyed were 10 percentage points more likely than women to say they've got a raise coming in the next year, 48% compared to 38%. The difference in expectations is even wider between high-earning and lower-income households: 50% of workers with a household income of $100,000 or more say they expect to earn more this year, contrasted with 36% of workers with household incomes of less than $50,000. 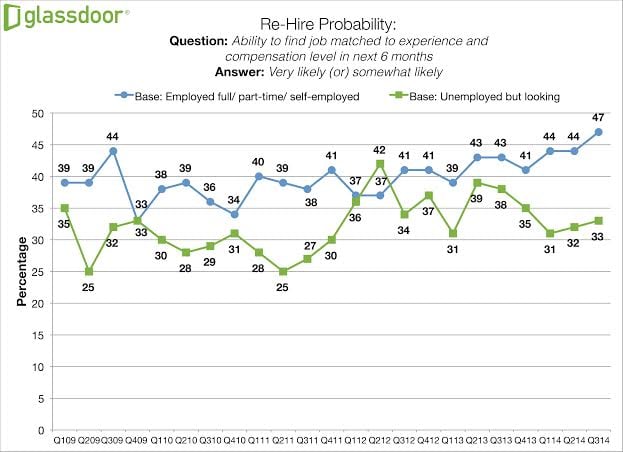 Who's most likely to leave?
Based on those numbers, under-35s in high-paying fields are the workers most likely to head for greener pastures in the near term. That means that companies with relatively young workforces should be "on notice," according to Glassdoor career and workplace expert Rusty Rueff. Because employment numbers are rising overall, competition for the best talent is growing while employment options are expanding. These days, recruiting and retaining the right people is going to require more than a foosball table in the break room and an employee discount.

More money
Nothing says "good job" quite like cash. There may be more people in the workforce now, but earnings are still flat -- essentially unchanged in September and up only 2% over the past year, according to the BLS report. In this environment, any employer that can offer above-average compensation is going to pique the interest of talented workers, especially those who are still paying off student loans. Companies that aren't planning a big hiring push over the next year still need to step up their salary game soon in order to retain the talent they've already spent time and money recruiting and training.

Better benefits
Changing jobs isn't always about money. Some workers seek out specific benefits and perks to suit their lifestyle, whether that's a generous 401(k) plan or a lot of vacation time. Sweetening a company's recruiting pitch and retention odds could be a matter of tweaking the existing employee health insurance plan, committing to better work-life balance opportunities, or increasing the number of paid days off each year--or doing away with the concept altogether, as Netflix and Expedia have.

The bottom line
As workers become more secure in their ability to find good jobs that pay well, companies that meet those expectations will have a strong advantage in recruiting and retaining talent. This is especially true for companies with a lot of under-35 workers, the ones who feel most confident in their ability to jump ship and land on their feet.

What do you think? Are you more optimistic about your job prospects in the near future? Use the comments section below to chime in.