Please ensure Javascript is enabled for purposes of website accessibility
Log In Help Join The Motley Fool
Free Article Join Over 1 Million Premium Members And Get More In-Depth Stock Guidance and Research
By Adam Galas – Oct 12, 2014 at 10:42AM

A new study says that the world can solve climate change for free, a claim that is disputed by many who argue the true cost will be in the trillions of dollars.

A new report from the Global Commission on the Economy and Climate, which was commissioned in 2013 by the governments of seven countries -- Colombia, Ethiopia, Indonesia, Norway, South Korea, Sweden and the United Kingdom -- recently made the bold claim that fighting climate change could be accomplished for free.

How is this possible when the commission itself estimates that $4 trillion will need to be spent to reduce carbon emissions over the next 15 years? The answer is twofold and lies partially with the enormous amount of money needed to grow the global energy supply. 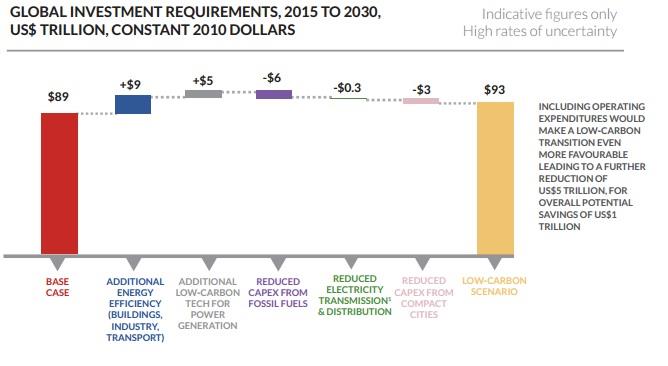 According to the report, the enormous amount the world will need to invest in its energy infrastructure through 2030 is an opportunity to make the kind of changes to the global economy that will allow the world to lower carbon emissions while maintaining growth.

"This is a massive amount of investment firepower that could be geared toward building better cities, and better infrastructure for energy and agriculture," said Jeremy Oppenheim, lead researcher on the report.

Meanwhile, Chairman of the commission, economist, and former Mexican president, Felipe Calderón commented on the reports: "We are proposing a way to have the same or even more economic growth, and at the same time have environmental responsibility ... we need to fix this problem of climate change, because it's affecting all of us."

But how exactly does the commission's $4 trillion in additional costs to reach a low-carbon future equate to free? Well to offset that cost the commission is including secondary benefits of its proposed policies, including lower fuel costs, fewer premature deaths from air pollution, and lower medical bills.

Those cost offsets have some critics of the report crying foul and arguing that the report is misrepresenting the true costs of fighting climate change.

Questioning the figures
Earlier this year the UN's Intergovernmental Panel on Climate Change (IPCC) released a report that agreed that secondary benefits would be a result of carbon reducing policies that support changes to the world's energy economy, such as reduced urban sprawl and increased renewable energy. However, the IPCC declined to place figures on these benefits citing the difficulty of monetizing such benefits.

"The assumption and the argument that this can be done for free, that's from my point of view overly optimistic. ... [Y]es, you rescue some lives, but to assign monetary values to this is particularly complicated," said Dr. Ottmar G. Edenhofer, a German climate economist who worked on the earlier study.

However, Dr. Edenhofer was clear that he supports the reports overall goals stating, "Climate policy is not a free lunch, but it is a lunch worthwhile to buy."

Meanwhile, others, including Dr. Samuel Alexander, a lecturer at the Office for Environmental Programs at the University of Melbourne, Australia, and author of Entropia: Life Beyond Industrial Civilization, argue that the entire premise of the report is wrong.

In a recent article titled "We Need Economic 'Degrowth' to Stop a Carbon Budget Blowout," Dr. Alexander points out that the report's assumptions are based on earlier work by the IPCC, which concluded that the maximum safe amount of warming, around which all its proposals are derived, is 2 degrees C above preindustrial levels.

Dr. Alexander highlights the fact that recently some studies, as well as the island nation of Nauru, speaking on the behalf of the Alliance of Small Island States, has recommended not allowing warming to escalate past 1.5 degrees C.

Citing the work of climate scientists Kevin Anderson and Alice Bows, in their study "Beyond 'Dangerous' Climate Change: Emission Scenarios for a New World," Dr. Alexander explains that, according to this study, to keep the earth from warming past this 2 degree limit would require developed nations to reduce carbon emissions by 8%-10% annually, a figure that would have to be increased if the maximum safe warming estimate were reduced.

Dr. Alexander also points out that in 2006 economist Nicholas Stern, head of the U.K.'s Government Economic Service and advisor to British government on the economics of climate change, published a study that concluded that annual carbon emission reduction of greater than 3%-4% was incompatible with a growing economy. In fact, according to Dr. Stern, carbon emission reduction beyond 1% annually was historically "associated with economic recession or upheaval."

Impossible policy recommendations?
Meanwhile Bloomberg's Megan McArdle points out that one of the key economic recommendation of the New Climate Economy report is the elimination of $600 billion annually in fossil fuel subsidies.

Unlike what many people imagine, the vast majority of fossil fuel subsidies occur in the developing world, especially in nations whose economies (and ruling regimes) are dependent on petroleum, such as in Venezuela where subsidized gas is six cents/gallon. 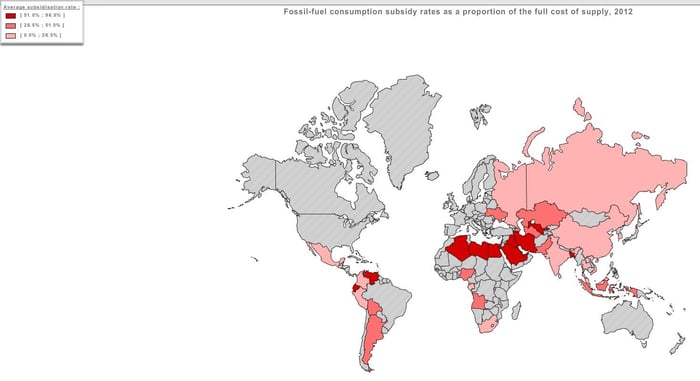 Eliminating these subsidies, while a great thing from a long-term economic/environmental perspective, is something that isn't likely to occur overnight, for no other reason than a sudden increase in fuel prices can destabilize developing nations. For example, when Yemen tried doubling the price of gas, it set off riots in the streets.

Fighting poverty trumps long-term environmental benefits
Critics of the New Climate Economy report such as Mrs. McArdle, correctly point out that "poverty has an urgency that overrides other considerations, which is why so many people have migrated from pristine countryside to squalid city."

The kind of secondary health benefits that a nation such as China would experience from replacing currently cheap coal-fired electricity with more expensive (though its cost is rapidly declining) solar or wind energy, can be a tough sell in the developing world. This is especially true when millions are still impoverished and rapid economic growth is seen as the only way to fix this important problem. This is perhaps why nations such as China and India have thus far refused to sign onto any climate treaties to date.

This is not to say that India is completely blind to the problem of its growing emissions. It has a plan to slow emission growth in the future, which includes doubling wind and solar power by 2020.

However, when it comes to the issue of firm cuts in emissions, India refuses to budge, arguing that 300 million of its citizens don't have electricity and where solar and wind can't help, coal and natural gas-fired power plants will expand. 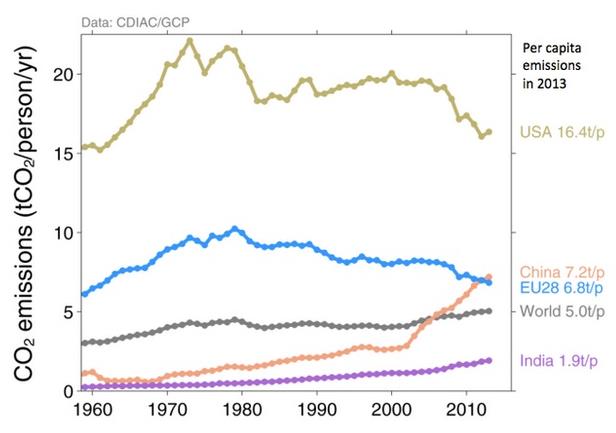 As this chart shows, the U.S. and Europe have greatly reduced their CO2 emissions in recent decades, yet these decreases have been more than offset by the rise of China's and India's emissions.

While the New Climate Economy report may make some valid points regarding the need for and consequences of the world decreasing its carbon emissions through proposals such as increased renewable energy sources, its headline claim, that climate change can be fought "for free" is dubious at best. Climate policy, climate economics, and the interplay between those and the global economy and its energy needs going forward are complex, and should the world figure out how to lower its carbon emissions, the effort will almost certainly require economic sacrifice from someone. Who should bear that burden is an issue that will likely take many years to resolve, assuming it can be resolved at all.