LeBron James has made an incredible amount of money on the basketball court, but what he has done off the court has netted him praise from Warren Buffett and many others.

It's tough to believe that when LeBron James walked off the court for the final time as a member of the Miami Heat, it marked the end of his 11th season in the NBA. In some ways, it feels like he's been around much longer than that. But in so many other ways, it seems like just a few years ago that he burst into the national spotlight.

Ever since 2002, when he was featured on the cover of Sports Illustrated and ESPN aired one of his high school games, LeBron has been a household name. And all those years his moves both on and off the court (notably his highly publicized, anger-inducing move from the Cleveland Cavaliers to the Heat) have been under intense scrutiny. Even back at the beginning, many people wondered if "LeBron Mania" already had gone too far.

But with two NBA championships under his belt, a return to Cleveland officially in order, and his place among the NBA's greatest players assured, all seems to have regained its balance since "The Decision" we'll never forget.

Yet what might have been underreported during this notable career are the incredibly smart things LeBron has done with the money he's made along the way.

The question now isn't if he'll become a billionaire, but when.

And there are three things we can learn from these great moves.

The power of diversity
Through his 11 seasons as a pro, LeBron has made $129 million from his NBA salary: 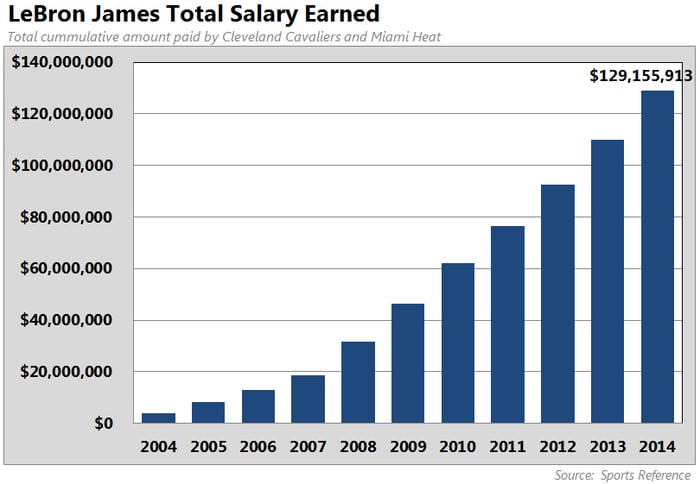 Yet Forbes has estimated that this represents less than 30% of the more than $450 million in total earnings he's made since 2004, including endorsements:

While concrete numbers are difficult to find, it's critical to remember that his income from endorsements is derived from deals with a wide range of companies. Nike, Samsung, and Coca-Cola have all thrown a lot of dollars at LeBron. So have other big names, such as McDonald's, Microsoft, and State Farm, and even smaller, lesser-known companies like lawnmower maker Cub Cadet and Juice Batteries.

LeBron also has other sources of income. He invested in Beats Electronics before it was sold to Apple -- which reportedly netted him $30 million -- and he became an investor in acclaimed English Premier League soccer team Liverpool in 2011.CNN reported earlier this year that he also was looking to team up with David Beckham in the expansion of Major League Soccer to Miami. And there is also LRMR Management, the marketing firm he founded.

So what does all of that have to do with us?

A critical way to minimize the risk posed by volatility in the stock market is through diversity. This allows investors to manage their risks and avoid any significant losses by ensuring that they don't have too much of their money in one thing.

In the same way, through his earnings on the court, his endorsements, and the variety of investments he has made along the way, LeBron shows us that he too isn't placing all his eggs -- well, dollars -- in one basket.

Make intelligent decisions by having the right conversations
And speaking of Buffett, it's important for us to see that LeBron hasn't sought to do this alone.

The same night he hit the game-winning shot against the Orlando Magic late last year, LeBron casually posted a picture of himself getting dinner with Carlos Slim, the world's second-richest man.

In addition, LeBron released a 2008 video of himself grabbing dinner with Buffett and Bill Gates. ESPN also reported that former Microsoft CEO Steve Balmer -- well before he bought the Los Angeles Clippers -- was also among those who "traded business knowledge with LeBron."

But all this isn't exactly new news. LeBron met Buffett in 2006, and the Oracle of Omaha has done nothing but heap praise upon him, like when he told ESPN: "You have to understand that LeBron is very smart financially. I've never heard him say anything that doesn't make sense."

Here we must see the critical importance of always seeking wise counsel and the wisdom won through experience whenever we make an investing decision. At times, our blind spots could yield disastrous results, so it's always critical to learn new things from those who have achieved success, and to ensure we're not missing anything before we make an investment.

In the same spirit, billionaire Ray Dalio once said that before he made any investment he "stress-tested my opinions by having the smartest people I could find challenge them so I could find out where I was wrong."

Thinking long term
Of course, we can also learn from what LeBron himself said when he discussed with The Wall Street Journal his move to purchase a piece of the Liverpool soccer club: "The first time I stepped on an NBA court I became a businessman. This is a great opportunity for me."

From the moment LeBron took the court in 2003, he recognized not just the opportunity that awaited him, but the need to consider his long-term goals as a businessman. Yet it wasn't as though he jumped at the first things available, either. As he told the Miami Herald in 2012, "I've got a lot going on right now. I'm not looking for too many new opportunities -- unless it's a good one."

There are many dangers in using short-term thinking in investing -- worrying about what will happen next week, next month, or even next year.

Like LeBron, we must understand the need to start investing early, but that doesn't mean we need to consider jumping at only short-term solutions.

The key takeaway
There is undeniably a lot we can admire about LeBron James based on what he does on the court, but so much of what he has done off the court can point the way toward success when it comes to what we do with our money.

Seeking diverse investments with a long-term focus, and always aiming to learn new things will propel LeBron to success in the future. It can do the same for the everyday investor as well.

This High-Yield Bank Stock Is Safer Than You Think