Please ensure Javascript is enabled for purposes of website accessibility
Free Article Join Over 1 Million Premium Members And Get More In-Depth Stock Guidance and Research
By Motley Fool Staff - Oct 13, 2014 at 8:30AM

Is the 75% drop in Exelixis, Inc. stock justified? Two of our top analysts weigh in and discuss the company's potential as a "bad news buy".

Clinical or regulatory setbacks can cause biotechnology stocks to crash in a hurry. On occasion, the market's pessimism isn't entirely warranted, setting the stock up for an equally impressive comeback. Deciphering which "bad news biotechs" are bargains can be a tricky endeavor, however.

So, we turned to two of our top analysts to get their opinion on Exelixis ( EXEL 2.15% ), a small-cap biotech that has plummeted by nearly 75% year-to-date, shown by the chart below. 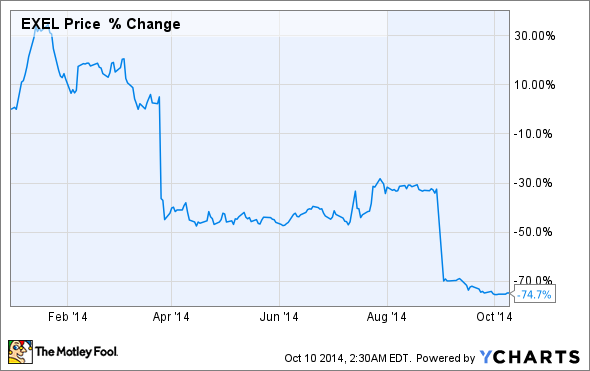 George Budwell: Starting this off, I'm always on the lookout for biotechs that have been oversold by a moody Mr. Market after stumbling in the clinic. Exelixis, though, still doesn't look like a bargain to me.

For a little background, this stock's plight is tied to the failure of its late-stage trial, COMET-1, examining cabozantinib (Cometriq) in men with metastatic castration-resistant prostate cancer. This trial was the company's only potential blockbuster indication in the works, making now a good time to check what's left in the cupboard.

First, we have the only approved indication for Cometriq, metastatic medullary thyroid cancer. Given how the drug performed in the first half of 2014, I think full year sales will come in at around $25 million. The problem is that even if the drug can maintain its 30% plus growth rate going forward, it'll still fall short of a mere $56 million in annual sales by 2017.

Next up is Exelixis's drug cobimetinib, being co-developed with Roche for advanced melanoma. Although the drug looks well on its way toward being approved after posting strong late-stage results, I have serious doubts about its commercial potential. Advanced melanoma is a tough indication given the drugs already on the market, and the likely approval of Bristol-Myers Squibb's new immunotherapy Opdivo. Based on its revenue sharing agreement with Roche and the crowded market, I therefore don't see Exelixis pocketing more than $50 million per year for cobimetinib.

What's left value-wise are the late-stage trials METEOR (metastatic renal cell carcinoma) and CELESTIAL (advanced hepatocellular carcinoma). After COMET-1's failure, I am less optimistic than ever that these two trials will produce positive results.

Overall, I think Exelixis will only generate about $100 million in revenue 3 to 4 years down the line, which doesn't present a compelling valuation scenario, in my opinion.
Brian Orelli: Let's face it -- This year's decline in Exelixis is completely justified. Blame it on the results from COMET-1. But the risk-reward looks better here than it did when Exelixis was north of $8 earlier this year.

I'll agree with George that Cometriq's sales for thyroid cancer aren't adding much to biotech's value. A measly $25 million in sales is nothing to get excited about.

You should be buying Exelixis for its potential in kidney and liver cancer, the METEOR and CELESTIAL trials that George mentions.

It's debatable whether Cometriq's failure in prostate cancer makes it less likely to work in kidney and liver cancer. In COMET-1, the drug delayed disease progression by a statistically significant margin. While that's not good enough to get approved -- overall survival, the primary endpoint, only increased 1.2 months, which wasn't statistically significant -- the prostate cancer data combined with the thyroid cancer data are a good indication that Cometriq is active.

If Cometriq is approved for kidney or liver cancer, it's not hard to see Exelixis worth $2 billion, figuring $400 million in sales at a price-to-sales ratio of 5. That's more than six times its current valuation. If you figure the share count might double as it raises more cash, there's still potential for shares to triple. If you think the METEOR and CELESTIAL trials have a greater than 33% chance of success and are willing to wait for the triple, Exelixis is priced right.

And then let's not forget about cobimetinib, which offers a backstop on the price. If the valuation falls too far, Roche may just buy the company so it doesn't have to share sales in the U.S. and pay a low double digit royalty elsewhere.

I'm not sure Exelixis will rebound in the near future -- METEOR results aren't due out until next year -- but if you're willing to wait the biotech looks like a decent valuation at this beat-down level.