For most of us, we consider blue chip stocks the ones that we see on an everyday basis. But what about the ones that we benefit from on an everyday basis that we don't know by name? Potash of Saskatchewan (NYSE: POT) really falls into that latter category, and its role as a leading fertilizer manufacturer makes it more important than we give it credit for. Let's take a quick look at Potash's business and why it has a case to be a blue chip stock. 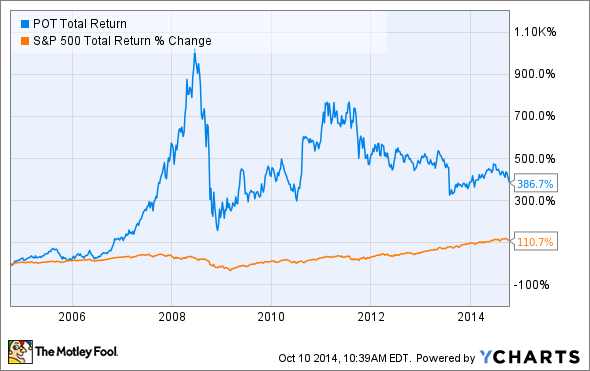 What do you consider a blue chip stock?
The first companies that come to mind when you hear "blue chip stock" are ones like Coca-Cola, Wal-Mart, ExxonMobil, and other giant companies that have a long history of being profitable and paying a growing dividend. Also, many of these companies have traits such as low debt profiles and strong cash generation. These traits pretty much go hand in hand with profitability and shareholder friendliness.

Give Potash a chance at blue chip status
Unless you grow all your own food without any fertilizer, chances are you have unknowingly used Potash's products. Potash Corp's sole business is the business of making plants grow. Its name might suggest that it only makes potassium-based fertilizers -- more widely known as potash -- but it also makes nitrogen and phosphate-based fertilizers. These three elements -- with the addition of carbon through a plant's ability to absorb CO2 -- are primary elements necessary for plant cell growth. As global population grows, per capita meat consumption increases, and the amount of arable land is starting to stagnate, farmers need to be able to increase field yields. To accomplish this, we are relying more on nutrient-specific fertilizers like the ones Potash supplies.

Potash -- the fertilizer -- is a mined product, and Potash Corp's mines for the product are some of the largest in the world. According to the company's most recent annual report, Potash owned close to 20% of the global capacity for potash. The reason that it has been able to attain this position is that it has some of the lowest cost mines. For the company, this is great because it means it has an immense competitive advantage. For investors, it's even better because the company consistently generates earnings and cash flow in both strong and weak commodity markets -- two traits that just about every investor looks for in a blue ship stock. 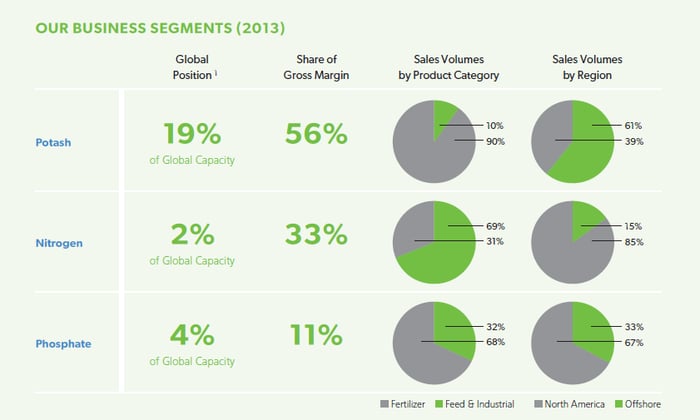 One aspect of the business that might give an investor pause is that the company has a debt profile that some might consider a touch high for a blue chip stock. Potash's debt to capital ratio is about 27%. It's not super high by any means, but looks very different from some other blue chips stocks that have much lower debt to capital ratios or might even be debt free. However, one thing to take into account is that things like mines are very capital intense, and Potash has been investing heavily in a new mine since 2006. As that project comes online, capital spending is expected to drop, which should lead to higher free cash flow to pay down that debt. IT could also help the company continue its track record of increasing its dividend -- which yields more than 4% today -- and buying back shares to increase shareholder value. 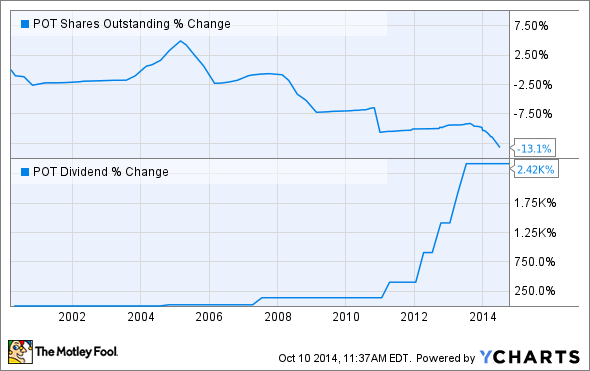 What a Fool believes
There aren't a lot of industries out there that can't be disrupted, but one thing that we can't really replace is the basic nutrients to grow cells. This means that Potash Corp probably will be able to maintain its competitive advantage for many years to come. Potash probably won't be making front page headlines anytime soon like many of the other companies we consider blue chip stocks -- after all, potassium based fertilizers isn't exactly a sexy topic -- but its long tenured history of generating returns for shareholders should be enough of a reason to consider Potash in the company of other blue chippers.