Teen apparel retailer Aeropostale (AROPQ)is having a tough year. The business is facing significant industry headwinds, a serious cash crunch, and a stock price decline of 68%. While the cheaper stock price may pique some investors interest, there are too many risks at Aeropostale to make it a good value investment.

A year to forget
Good value investments are born when an underlying businesses is performing better than its stock price. That's not the case at Aeropostale.

Aeropostale reported its sixth straight quarterly loss in late August. For the quarter, both top-line and same-store sales both sank a staggering 13%. Aeropostale also issued poor third quarter guidance, calling for a larger than expected loss.

Last year top-line sales dropped 12%, they're down 12% so far this year as well, which has led to consistently high inventory levels. This in turn has led Aeropostale's management to heavy discounting of products, as they try to lure more customers into stores, and that has accelerated an on-going decline in operating margin and cash flow (below). 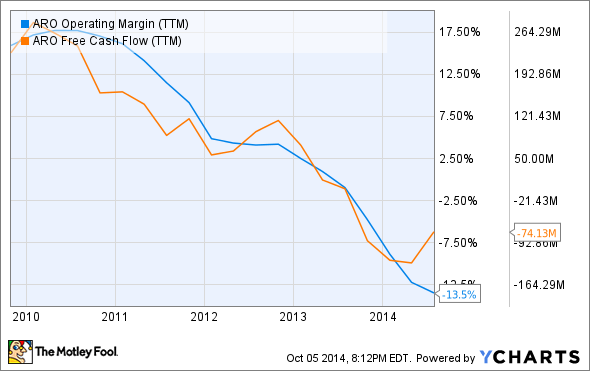 Aeropostale's operating margin is the percentage of profit it takes from sales, after expenses. The heavy discounting environment in teen retail is having an impact on Aeropostale's profitability, and some analysts are questioning if the company can generate enough cash to stay above water. In March, the company took out a $150 million dollar loan from Sycamore Partners, which helped it stay liquid in the short-term, but that doesn't mean the business is worth saving.

Aeropostale's issues may be systemic
In its own words, Aeropostale describes its business as a "primarily mall-based" apparel retailer principally targeting 14 to 17 year olds. They've spent years building that brand image, and investing in shopping mall locations, which is backfiring now.

According to retail analytics firm ShopperTrak, holiday season mall traffic has declined three years straight, down 28.2% in 2011, 16.3% in 2012 and 14.6% in 2013. Worse, it appears that when teens do shop at brick-and-mortar stores, the mall is no longer their first choice.

In its most recent annual report, Aeropostale's (now) former CEO explained the change in consumer behavior: "with the rise of digital channels, teens no longer rely on the mall to socialize." If this trend continues, its bad news for Aeropostale, along with Abercrombie & Fitch (ANF -0.42%) and American Eagle (AEO -2.91%), as their entire business was based on teens hanging out at malls. Aeropostale did close its mall based "P.S." stores, hoping to improve its cash flow, but it's still pinning its recovery on the backs of mall-based Aeropostale stores.

Aeorpostale is trying
According to a recent study by Piper Jaffray, there are several changes happening among teen consumers. Today, teens favor "fast fashion," individualism and a connection to a brand. Stores like Forever21, which favor new, trendy, fashion over logo's have done quite well in this environment.

Aeropostale has caught on and is trying to adapt. Management is moving away from being a "logo-based" product, and trying to rebrand the company as a "fashion orientated lifestyle brand." They've invested heavily in new product development that fits this look, and they are now introducing new fashions rapidly, so that teens have a reason to go into stores, regularly. They've even launched a new fashion line with YouTube sensation, and teen trend-setter Bethany Mota, to improve their connection to their audience, and lend "fashion" credibility.

Can Aeropostale rebound?
Aeropostale has always been known as a logo-based product. The big, bold, label that was sought after by teens in order to "fit in," is now an albatross. This isn't what teens are looking for today. While it's great that Aeropostale has identified this trend, changing a brands core identity is a huge uphill climb. It is very hard to change customers first impression.

When I hear names like Aeropostale, American Eagle, or Abercrombie and Fitch, I am reminded of what was cool when I was a teenager. At 32 years old, there are very few things I wore in high school that are still cool today.

When you couple Aeropostale's fading brand, with worrisome mall trends, new debt from Sycamore, and dreadful cash flow, this business is in critical condition. Add in the fact that it relies on the tastes of 14 to 17 year olds, which change rapidly, and I'm not interested. There's no reason to think that this stock is a value, even with such a low price tag.