OPEC will allow oil prices to slip to as low as $80 in the short term in order to push prices higher over the longer term.

In a somewhat surprising piece of oil news this week, OPEC is growing more comfortable with falling oil prices. Reuters reported this week that Saudi Arabia is quietly telling the oil market that OPEC could accept oil prices as low as $80 for as much as two years before taking action to cut production. The reason behind this change in strategy appears to be focused on cutting out the growing competition it's seeing from U.S. shale and ultra-deepwater sources. It's a move aimed at accepting some short-term pain in order to maintain long-term control over the oil market.

Short-term pain
While OPEC doesn't have an official price target for oil, it prefers oil over $100 per barrel. That's the number most members need in order to balance their budgets, especially Iraq, Iran, Venezuela, and Algeria. However, given that Saudi Arabia pumps a third of OPEC's oil, it really has a lot of pull. As such, it's willing to let oil prices keep slipping, even as that strains its fellow members' finances, in order for higher oil prices over the longer term.

The hope is that by allowing oil prices to fall OPEC can force producers elsewhere to cut back on higher cost production. As the following slide from a recent Seadrill (SDRL) investor presentation notes, onshore oil in the Middle East costs just $27 per barrel while oil from North American shale and ultra-deepwater sources cost an average of $56 and $65 per barrel, respectively. 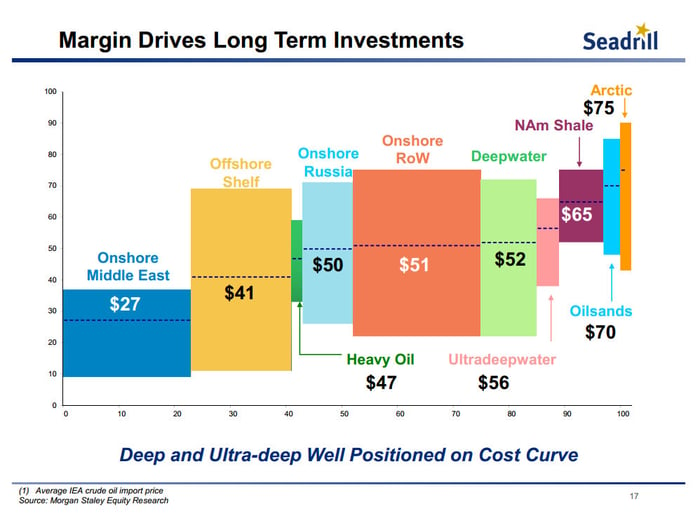 So, by not cutting production and allowing oil prices to fall down to around $80 per barrel, Saudi Arabia can still earn a nice profit margin on the oil it's producing. While it won't be earning as much money as it would at $100 oil, it's comfortable with that in the short term because it believes it can make even more money in the longer term.

Long-term gain
OPEC knows that North American shale producers at the higher end of the cost curve won't be making any money at all with oil at $80 per barrel. This will force these producers to slash investments, and could even push some overleveraged companies with high costs into bankruptcy. Further, it will hurt investment returns, which could cut off the supply of capital that's been flowing into shale production over the past few years. This lack of returns will make it really hard for producers to lure investors back once oil prices start moving higher in the future, which will act as a headwind stunting the future growth of oil production.

In addition to causing a big shakeout in North American shale, OPEC's plan would also slow the growth of long lead time ultra-deepwater oil projects. These projects are very expensive, and we've already seen big oil producers cut back on spending as high-cost projects have really affected profitability even when oil prices were over $100 per barrel. By forcing deepwater producers to make even deeper cuts it would even further slow down the process that already takes years to go from discovery to first oil.

What OPEC is banking on is having fewer competitors when oil supplies start to decline. That will happen naturally due to the nature an oil well. As the following slide from a recent Chevron (CVX -2.91%) investor presentation points out, existing base production is in a steady state of decline so that nearly 200 billion barrels of new production will need to come online by the end of 2030 just to meet demand. 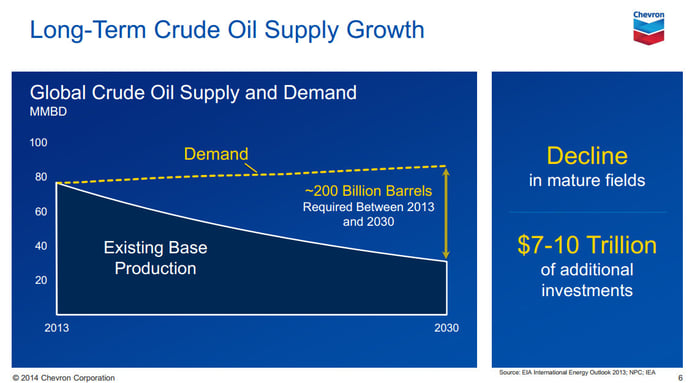 OPEC wants to be the one supplying this oil and earning the high profits from the investments needed to bring this production online. So, it believes that with fewer new wells being drilled from its competitors that production will start to fall off as new wells aren't coming online to maintain that production even as demand for oil continues to grow. This scenario could cause supply and demand to become unbalanced so that OPEC can earn even higher profits when oil prices begin to skyrocket.

OPEC's plan appears to be one focused on allowing oil prices to fall in the short term so that higher cost production is taken out of the market. Then OPEC can enjoy even stronger profits as oil prices rebound amid slumping oil supplies. It's a pretty bold plan and one that no one really expected from OPEC, as it seemed pretty intent at keeping oil prices above $100 per barrel to keep its budgets balanced.