Even though the bank met expectations, shares dropped following the earnings announcement. What caused this, and should investors be worried?

This morning, Wells Fargo (WFC 0.74%) reported third-quarter earnings that matched Wall Street's expectations. Revenue was up from the same period last year, as were the loan and deposit portfolios, and the company's assets performed better. Plus, the bank is running more efficiently and is well-capitalized.

So why are shares down nearly 2% following the announcement? And more important, what can investors expect going forward?

The results look strong
Wells Fargo posted earnings of $1.02 per share, which is 3% higher than the same quarter last year. Total revenue was up 4%, and the bank's efficiency ratio improved by 140 basis points to 57.7%.

The lending portfolio grew by more than $31 billion year over year, and the bank's deposits totaled $1.1 trillion, up by more than $100 billion from last year. Credit card, automotive, and commercial banking loans all experienced double-digit annual growth rates.

The company's credit quality also keeps improving. Wells Fargo has an extremely low net charge-off rate of 0.32%, and only had net charge-offs of $668 million in the quarter, which sounds like a lot but is much improved from nearly $1 billion a year ago.

Then why the drop?
There wasn't much negative news in the company's earnings report, but there are a few possible explanations for the stock drop.

For example, Wells Fargo's net interest income rose by $150 million, but the net interest margin actually fell by nine basis points to 3.06%. Revenue and earnings increased, but the low-interest environment might make it tougher for the company to increase profits going forward.

Another possible explanation is that some good news was already baked into the share price, which is up by more than 19% over the past year, even after today's post-earnings drop. 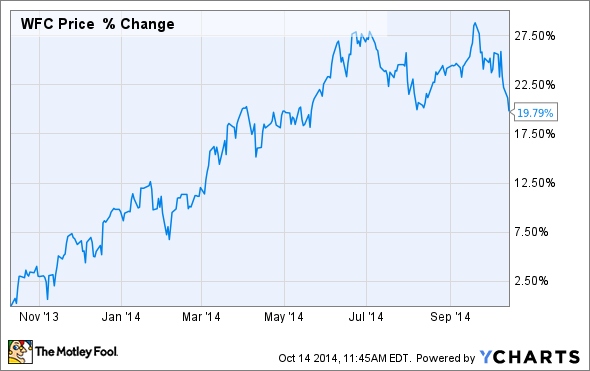 This could just be shares coming back down to Earth after some strong gains.

Wells Fargo has a fairly strong history of beating analysts' expectations, so simply meeting the predictions could be seen as a "miss."

Plus, Wells Fargo is highly dependent on economic growth to increase its profits. With a large percentage of revenue derived from mortgage, auto, and personal lending, the business needs people who can afford homes and cars, and qualify for credit cards. Any slowdown in economic growth could greatly impact these revenue streams.

Is this a buying opportunity?
I think it is. Wells Fargo is still growing in all the right ways, and has capital levels and asset quality among the best in the banking industry. Despite the recent market correction, U.S. GDP growth numbers look solid, so I'm not worried about the bank being able to sustain its growth rate.

As CEO John Stumpf said in a press release, "We continue to see signs of a steadily improving economy, and I remain optimistic about the opportunities ahead for Wells Fargo."

In a nutshell, Wells Fargo is still the best in breed among the U.S. big banks, so investors should expect to pay a premium for the stock. With shares trading at their lowest level since May, now might be a great opportunity to add some strength and stability to your portfolio.