Microsoft scores a victory in September, with the Xbox One reportedly outselling Sony's PS4. 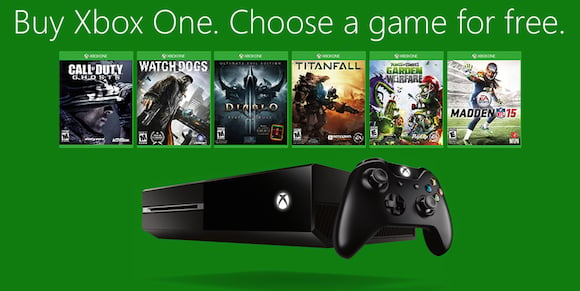 Microsoft ran a free game promotion from September 7-13, which worked like a charm. Image source: Microsoft.

It seems that every month you see a headline proclaiming that Sony (SONY -0.71%) has sold more PlayStation 4 units than Microsoft's (MSFT -2.36%) Xbox One. That may be mostly true since both next-generation consoles launched nearly a year ago, but the tables turned in September. The software giant came out ahead this time around.

2 for the price of none
That's according to Wedbush Morgan analyst Michael Pachter, who estimates that Microsoft sold 325,000 Xbox One units during September. That would be enough to beat Sony's estimated 250,000 PS4 units. That would be the second month that Microsoft has been able to squeeze out a victory.

As Sony has beaten Microsoft in cumulative unit sales thus far, Microsoft has gotten more aggressive with pricing and promotions. The company unbundled the Kinect in order to reduce the Xbox One's price point to $399, matching the PlayStation 4, in June. Unit sales promptly doubled over the prior month.

In September, Microsoft then launched a promotion where buyers would get a free game (up to $60 value). That promotion was timed to coincide with the launch of Activision's (ATVI -2.42%) Destiny, which was eligible for the promotion, among a slew of other titles. The deal even included Xbox One bundles that already come with free games (Madden NFL 15 or Forza Motorsport 5), so gamers could effectively get two free games.

Microsoft's promotion beat Sony's marketing
Sony has put a lot of marketing dollars to promote Destiny, even as it is a cross-platform title available on both consoles. In fact, Sony scored an exclusive marketing deal with Activision, whereby Microsoft wasn't allowed to advertise the title and Sony will receive exclusive content for a limited period of time. Instead, Microsoft ran a mock campaign for a fictional "Destiny Fragrance" as an underhanded way to poke fun at its rival.

Well, there was nothing precluding Microsoft from running its free game promotion, which appeals directly to consumer pocketbooks. That approach seems to have been more effective than Sony's massive marketing campaign, particularly when it comes to driving console unit sales. That's even more impressive considering Microsoft likely spent less than Sony on its promotion.

Xbox matters
Microsoft sold 11.7 million consoles during its just-closed fiscal year, although the company does not regularly disclose product mix. In April, the company said it had reached 5 million in cumulative Xbox One channel shipments, but hasn't said much since. In August, Sony announced that it was up to 10 million PS4 units sold, so it seems that the Japanese company is still winning this race by a healthy margin.

Interestingly enough, former Microsoft president of Interactive Entertainment Business, Don Mattrick (who has since left for Zynga), said back in 2008 that 10 million is the magic number, and the company that hits 10 million in console unit sales first is deemed the winner of that generation's console war. That means that Sony has won by Microsoft's own definition.

Of course, Microsoft isn't throwing in the towel quite yet, as it remains committed to the Xbox business. Xbox platform revenue jumped 34% last fiscal year thanks to the launch of the Xbox One.