The smoking cessation product might not cause neuropsychiatric events, but the FDA wants more data.

Sales of Pfizer's (PFE -0.43%) Chantix were knocked down a few years ago when the Food and Drug Administration slapped a black box warning on the smoking cessation drug after reports of patients experiencing neuropsychiatric events, including thoughts of suicide. Prescriptions went from a peak of about 2 million prescriptions in the fourth quarter of 2007 to around 531,000 in the first quarter of this year.

The agency asked Pfizer to look into the matter further to see exactly how bad the situation really is. Pfizer combined the results of five studies and found that Chantix didn't increase suicidal thoughts or actions compared to a placebo. In fact, the rate of suicidal ideation and/or behavior was slightly lower -- 2.5% of patients taking Chantix -- than the 3.5% of patients who took a placebo. Another pooled analysis of 18 clinical trials found similar levels of other psychiatric events -- anxiety, depression, and mood disorders -- between those taking Chantix and those taking a placebo.

Last month, Pfizer convinced the FDA to add those findings to the label. The FDA also added four large retrospective observational studies that also showed no difference in neuropsychiatric events, although it noted there were limitations in interpreting the data.

But the black box is still there. At least for now. 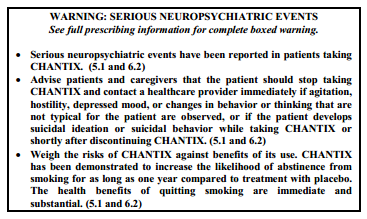 Meeting upcoming
The fate of the black box warning will be decided at a meeting on Thursday, where an advisory committee will vote to remove the black box, modify its language, or keep the black box as it is.

The committee's vote is only advisory -- the FDA doesn't have to follow it -- but given the seriousness of a black box safety warning, it seems likely the agency will follow the advice of its outside experts, especially if they recommend to keep it.

In briefing documents released ahead of the meeting, the FDA said that the meta-analysis and observational studies have "limitations" and wants data from a prospective clinical trial before regulatory action is taken on the black box.

Three years ago, Pfizer started such a trial comparing Chantix to GlaxoSmithKline's (GSK 0.65%) Zyban, which also has a black box for neuropsychiatric reactions, a nicotine patch, and placebo. The trial reached its 8,000-patient enrollment goal in the summer, putting the trial on pace to bare results in the third quarter of next year.

Advisory committee meetings are always a wildcard, and members tend to be a little more lax on the data requirements than FDA reviewers. But my guess is the committee members will follow the FDA's lead and recommend that the agency wait for the prospective clinical trial before making a decision.

While that would be bad news for Pfizer, from a patient perspective there's little harm in waiting. The worse thing that could happen is that patients don't take the drug because of the black box warning. If Chantix were the only smoking cessation product, that would be a decent argument since smoking can kill you -- but there are other options for patients.

On the flip side, if the FDA removes the black box and the clinical trial shows an increase in neuropsychiatric events in patients taking Chantix, the FDA will have to put the black box back on. Who wants to be the doctor that voted to remove the prominent warning that should have been there?