On Thursday morning, Delta Air Lines ( DAL -7.38% ) released yet another rock-solid earnings report. The company posted quarterly adjusted earnings per share of $1.20 on revenue of $11.18 billion. Both figures came in slightly ahead of the average analyst estimate, which called for EPS of $1.18 on revenue of $11.12 billion.

Delta projected that it will post solid earnings results in the fourth quarter as well. Between the company's consistent earnings power and its strong free cash flow, Delta is one of the best stocks in the airline industry for long-term investors.

Earnings power still improving
Delta's quarterly adjusted EPS was down from $1.41 in the third quarter of 2013. However, the company last year was not accruing any tax liabilities, due to offsetting losses from previous years. Starting in 2014, Delta is including tax expense in its accounting statements, although it won't need to make any cash tax payments to the government for many years.

A better way of comparing Delta's third-quarter results to its 2013 performance would be to look at pre-tax earnings. On that basis, Delta posted strong earnings growth: It earned $1.6 billion before tax last quarter, up $431 million year over year.

Delta's operating margin was 15.8%, a new quarterly record. That was near the middle of the 15%-17% guidance range provided in July, but close to the top of the revised guidance range that Delta has been using since the beginning of September.

More good times ahead
Passenger unit revenue rose 2.4% year over year in the third quarter, but Delta expects 0%-2% growth for the current quarter. This slight slowdown could be attributable to any of several factors, including overcapacity in certain markets, Ebola-related fears, and the impact of tougher comparisons.

Whatever the cause, this slowdown in unit revenue growth will be more than offset by falling jet fuel prices. Delta expects its economic fuel expense to average $2.69-$2.74 per gallon in the fourth quarter, down from $3.05 in the same period 2013 and $2.90 last quarter.

Cash is king
Many of Delta's peers in the airline industry have also posted strong earnings growth in the last year or two. What sets Delta apart from the pack is its unparalleled cash generation.

To put that number in context, Delta could very well produce more free cash flow this year than the rest of the U.S. airline industry combined. Strong free cash flow has allowed Delta to cut its debt burden by nearly $10 billion since 2009, and an increasing proportion of that cash stream is being used for shareholder-friendly activities such as buybacks and dividends.

A solid long-term pick
Despite repeatedly posting strong results, Delta stock has fallen significantly from the all-time high it hit earlier this year. Delta shares were down more than 3% in pre-market trading on Thursday. 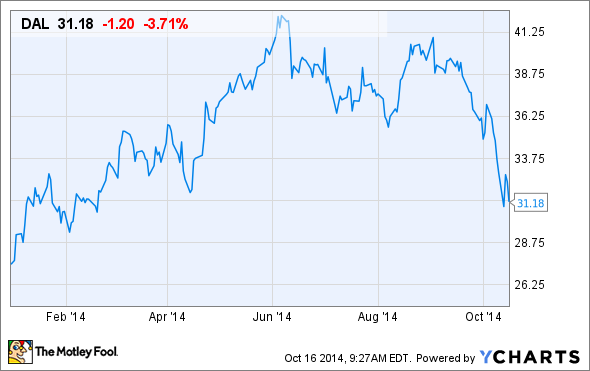 Delta shares now trade for less than eight times free cash flow. This is an unusually low valuation for a company on an upward earnings trajectory. As a result, the recent pullback represents a great opportunity to make a long-term investment in Delta Air Lines.