Carnival is spending a lot of cash to grow its business. Is it worth it for shareholders?

Carnival Corp (CCL -3.93%) is the world's preeminent cruise operator. Its market share is twice that of Royal Caribbean (RCL -3.01%), its closest competitor.

Carnival's size gives it an advantage in an industry where the lowest-cost operator has the upper hand. Even so, Carnival is not satisfied to maintain its current market position; it is upgrading its current ships, and expanding its fleet to widen its lead in the cruise industry. Let's break down how Carnival is investing capital to grow shareholder value.

Making the necessary investments
The cruise industry is one of the most capital-intensive industries that still turns an economic profit. A single ship costs hundreds of millions of dollars to build and furnish, and many millions each year to maintain. Although it's difficult for investors to judge the adequacy of maintenance spending, it's crucial that Carnival makes the necessary investments to maintain a working fleet.

The company came under a barrage of bad publicity in 2013 after three of its ships experienced mechanical failures. In February 2013, passengers were stranded for five days as one of its ships remained helplessly adrift in the Gulf of Mexico following a fire that caused a total power failure, according to Time magazine. One month later, CNN reported that a second ship lost power, and a third suffered mechanical failure.

The ships' problems may have been caused by inadequate maintenance spending. Carnival's capital expenditures as a percentage of revenue are at a decade low. 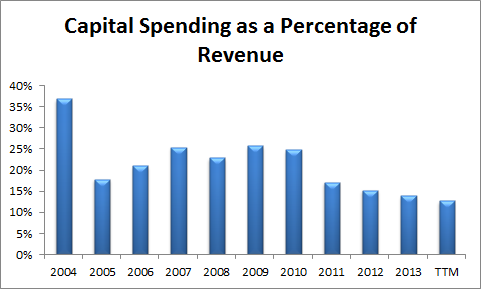 The program is as much about marketing as it is about making necessary upgrades. Chief Operating Officer Howard Frank said, "We think it's important to do that and to demonstrate to the 10 million people that cruise with us every year that our ships are safe and that safety is our highest priority." As the Time article noted, the ship that lost power in February was sold out just four months after the incident – showing that consumers trust Carnival to adequately maintain its ships.

Princess will add a new $800 million ship to its fleet in 2017. Photo credit: Royal Princess.

Growing capacity
In addition to maintaining the quality of its existing ships, Carnival plans to grow its fleet in the coming years. At the start of the year, Carnival had 101 cruise ships compared to Royal Caribbean's 41 ships. However, the world's largest cruise ship operator isn't content to sit on its lead. The company recently announced plans to build an $800 million ship for its Princess line that is scheduled for delivery in 2017. The new ship is one of several slated to be added to Carnival's fleet during the coming years.

Carnival's newbuilds should add shareholder value as long as total industry capacity does not exceed demand. Carnival's total passenger capacity is expected to grow at an average of 3.2% per year through 2017. Royal Caribbean expects its capacity to grow 1.7% in 2014, with more ships planned for delivery in the next few years -- including the $1.1 billion Quantum of the Seas. Cruising.org reports that cruise industry passenger growth grew by 5.9% per year during the last 10 years. If demand continues to grow at a similar pace, then Carnival and Royal Caribbean's expansion plans should not drive down industry pricing. As a result, Carnival's newbuild spending is likely money well spent.

Takeaway
Carnival operates in a capital-intensive industry, and it's vital that it spends the necessary capital to maintain and expand its fleet. The company's spending program to upgrade fire and power systems on every ship in its fleet should reassure passengers that the company's ships are safe and reliable. Moreover, Carnival's capacity growth will likely allow it to maintain market share without putting downward pressure on pricing. As a result, Carnival's capital spending initiatives should create value for shareholders.