Linn Energy is a high-yielding oil and gas company that is making all the right moves to secure and grow its monthly dividend. Find out how it can help you.

Generally speaking, what a retired income investor needs most is an investment with a high, safe, and growing yield.

That is why Linn Energy LLC (LINEQ) and its non-partnership alternative, LinnCo LLC (NASDAQ: LNCO), make for quality, high-yield investments that income investors, including retirees, should at least have on their radar -- and possibly in their portfolios.

Linn Energy: a brief introduction
Linn Energy is the largest exploration and production master limited partnership (MLP) in the oil and gas sector, 76% as large as all its competitors combined. Its enormous size and scale give it a presence in nearly every major shale oil and gas formation in America. 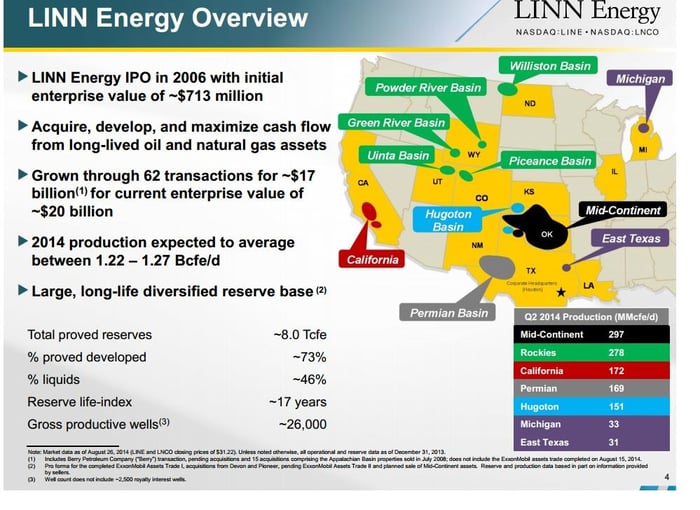 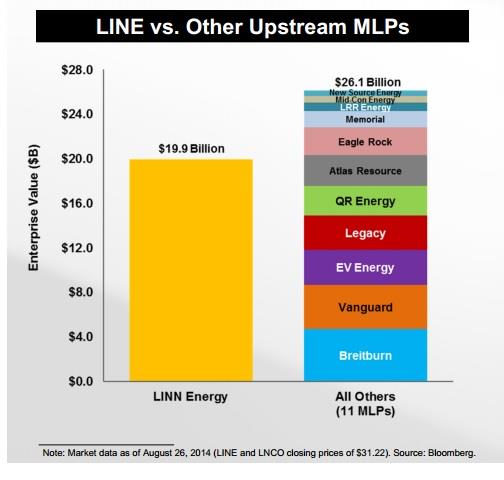 The partnership's masterful ability to grow through accretive acquisitions has allowed it to raise its distribution by 79% since its IPO, and that is the first major reason to consider Linn Energy for your retirement portfolio.

High-yield is just the beginning
You can invest in Linn Energy in two ways: through the MLP, Linn Energy, which yields 10.1%, or the C-corp alternative, LinnCo, which yields 10.4%. The difference between the two is that LinnCo exists purely to own units of Linn Energy, which it uses to pay its dividend. This allows income investors to own LinnCo in IRAs, (which often don't allow you to invest in MLPs due to tax reasons). Investors interested in having tax deferred dividends (which MLPs pay and are called "distributions") can choose to invest in Linn Energy.

Both the MLP and C-corp pay a monthly dividend (or distribution), which is wonderful for paying monthly living expenses.

Of course, a high yield can be a danger sign instead of an opportunity, which brings me to the second reason to love Linn Energy: the security of its payout and the prospects for future dividend/distribution growth.

Distribution security courtesy of Linn's latest deals
Linn Energy ran into some trouble when its acquisition of Berry Petroleum acquisition ended up costing $600 million more than initially planned. The deal was financed with LinnCo shares, which had declined in value at the worst possible time. In addition, some of the assets Linn Energy acquired in the deal required expensive drilling to produce and had high decline rates. Thus Linn Energy faced the prospect of higher capital expenditure costs that threatened the distributable cash flow (DCF).

However, management took action and initiated a series of trades and deals to replace its high cost/high decline assets, with already producing, lower cost/low decline assets. For example, Linn Energy traded 25,000 acres of Permian Basin acreage to ExxonMobil (XOM 2.45%) for 500,000 acres in the Hugoton field of Kansas, whose gas wells had a decline rate of just 6%. In the process Linn Energy increased its companywide gas reserves nearly 10%, gas production by 18%, and its annual DCF by $30 million to $40 million, thus securing its payout. However, management was just getting started.

Linn Energy later bought 900,000 net acres, with an average decline rate of just 14%, from Devon Energy (DVN 7.48%) for $2.3 billion. To fund the deal, it planned to sell acreage in the Granite Wash shale, which had a decline rate of 40%. On Oct. 3, Linn Energy announced the completion of the sale of these acres, as part of a $2.35 billion asset sale of high decline acreage to finance the Devon Energy deal. Together, these two deals wound up saving Linn Energy $300 million to $400 million in annual capital expenditure costs by lowering the company's annual decline rate to just 15%, further securing the payout.

Linn Energy further expanded its presence in the low decline gas fields of the Hugoton basin with its recent $340 million acquisition of 235,000 net acres (with 1,200 producing gas wells) from Pioneer Natural Resources (PXD 2.99%). This acreage also had a low 6% decline rate and makes Linn Energy, with 1.5 million net acres, the largest gas producer in the Hugoton basin.

Finally, Linn Energy most recently traded 17,000 acres of midland acreage as well as 800 acres of its Delaware basin assets, which was producing 4,700 barrels/day of oil with an annual decline rate of 35%, to ExxonMobil in exchange for its Belridge oil field in California. The Belridge field has current production of 3,400 barrels/day of 100% oil and a low 10% decline rate. The deal increases Linn Energy's highly profitable oil reserves by 8 million barrels and is expected to improve cash flows by $20 million to $30 million per year.

Taken together, Linn Energy's deals mean that it will have reduced its capital costs by $550 million to $650 million and is expected to generate a DCF excess of $103 million/year. That makes the distribution coverage ratio 1.1 and should give income investors confidence that payout won't be cut. However, in order to return the company's dividend/distribution to its historical 3%-4% annual rate, accretive acquisitions will be necessary according to CEO Mark Ellis -- which is the third reason retirees and income investors should love Linn Energy.

Accretive acquisitions mean dividend growth ahead
Currently Linn Energy is busy consolidating its new assets and closing on its asset sales. This means that the high yield is secure, but investors shouldn't expect growth in the short term. However, looking at Linn Energy's long-term track record, we can see 62 acquisitions worth $17 billion, and given Linn Energy's penchant for using shares of LinnCo as currency for such deals, the company's enormous size gives it plenty of ammunition to go hunting for further acquisitions in what Richard Kinder, founder and CEO of Kinder Morgan calls "a target-rich environment."

How target rich? Well as this pie chart illustrates, the MLP universe is an enormous market, with the Linn Energy sitting as king of a $46 billion E&P segment that is ripe for mergers and acquisitions, according to Ernst & Young. 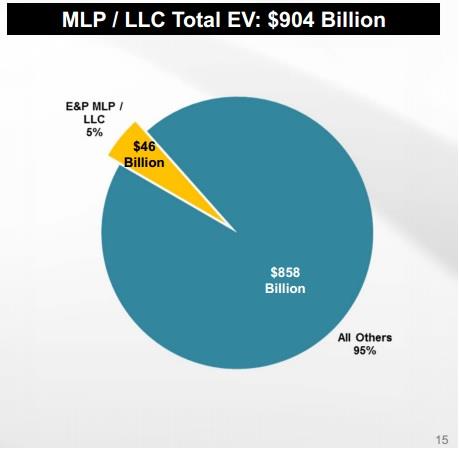 Bottom line
When it comes to helping achieve, or fund a prosperous and sustainable retirement, high-yield dividend stocks such as LinnCo or its MLP equivalent, Linn Energy, are a wonderful way to profit from America's historic shale oil and gas boom. Their high, secure, and (hopefully) growing dividends/distributions not only can pay expenses during retirement, but can help build a diversified income portfolio that can grow your wealth long into your golden years.