Please ensure Javascript is enabled for purposes of website accessibility
Log In Help Join The Motley Fool
Free Article
Join Nearly 1 Million Premium Members And Get More In-Depth Stock Guidance and Research
By Daniel B. Kline – Oct 20, 2014 at 11:42AM

The new service is attempting to sell content that is mostly free anyway to an audience largely not interested in its shows.

CBS (PARA -0.77%) has entered the digital streaming world with a new $5.99-a-month service that will allow viewers to watch the network's programming live and on demand. The first-of-its-kind offering from a major broadcast network also offers a number of shows from the CBS archive, and feeds from local CBS Television stations live in 14 of the largest U.S. markets.

Dubbed CBS All Access, the services does not require a cable subscription. "CBS All Access is another key step in the company's long-standing strategy of monetizing our local and national content in the ways that viewers want it," said CBS CEO Leslie Moonves.

That's a corporate speak way of saying that CBS owns a bunch of stuff, and if people are going to drop their cable subscriptions, the company needs to go where its potential audience is. All Access won't have deep archives of all CBS shows due to existing deals with other streaming services, but it will have many of them. At launch the service has:

The company is breaking new ground; but ultimately, Hulu and Netflix (NFLX 0.94%) have little to worry about because CBS All Access won't work as a paid service. 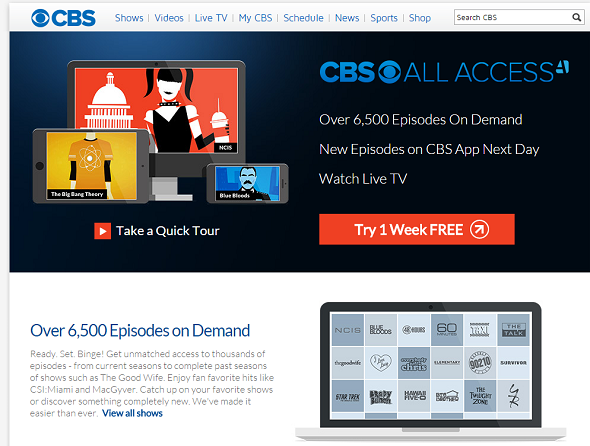 A screenshot of the CBS.com touting All Access. Source: Author.

CBS has an old user base
The viewer base for network television has grown steadily older. Michael Nathanson of Moffett Nathanson Research did a study that was reported on by The Washington Post, which found that during the 2013-14 TV season, the median age of broadcast network viewers was 53.9 years old, while the median age for viewers of all television, including cable was only 44.4. The news is even worse for CBS, which has the oldest audience, with a median viewer at 58.7 years old

"The shift in demographic viewing is caused by a combination of factors ranging from lower TV penetration rates of under-25 year old households to increasing use of time-shifting technologies in most under-55 year old households," Nathanson wrote in the report.

The network is already free
CBS already offers its most popular shows on its app and on CBS.com the day after the episode airs. This includes Big Bang Theory, Amazing Race, Survivor, and a couple of other shows that might appeal to younger viewers.

All Access will also offer the network's late-night programming, and David Letterman is being replaced by the younger -- and more millennial-friendly -- Stephen Colbert. That won't entice millennials to pay $5.99 a month; if Colbert hopes to compete with ABC's Jimmy Kimmel or NBC's Jimmy Fallon, he will have to make his best bits available for free on YouTube.

The nightly news certainly won't draw in younger potential customers, and neither will CBS' daytime programming, which includes The Price is Right, The Young and the Restless, and The Bold and The Beautiful.

CBS does have one thing that could lure people to pay $5.99 a month for All Access -- National Football League games. Unfortunately, those won't be included in the service.

Is it working?
Although it launched All Access in October, 2014, CBS still does not report any subscriber numbers for the service in its financials. That means that the numbers produced are not relevant. In fact, the company actually acknowledged that Q3 revenue from its entertainment division were "partially offset by an increased investment in programming and digital distribution initiatives."

All Access is clearly a long-term play, but the model is not working and it likely won't given the current landscape, how it's being priced, and what other companies are offering.

This is a bad idea
CBS has the right thought -- it needs a streaming way to reach customers who are going to leave cable. The problem is that the network saw the success Netflix has had, and got greedy.

It's not the concept of a CBS streaming service that's bad; it's the idea of charging for it as a stand-alone service. (The network is also offered on a streaming basis as part of Sony's (SONY -0.54%) PlayStation Vue streaming service, which I also do not have high hopes for).

Netflix is worth $8.99 a month because it has a deep array of movies, TV shows, and incredible original programming. It's hard to compete with that with MacGyver reruns -- even if he can make a working nuclear power plant from some gum, a ball of string, and a handful of pistachios.

Network television has always been ad supported, and that's a model that could make All Access successful. Drop the monthly fee, or make it a premium, ad-free option, and replace it with an ad-driven version of the service. That might be enough to pull in a user base. If it won't grow CBS's audience, at least it will give them an option to keep watching as cable slowly dies.

This isn't working and it's not going to work because CBS is not offering anywhere near the value of rivals including Netflix and Hulu. People won't pay piecemeal to rebuild the services they get from traditional cable because that would actually cost them more than just keeping the cord. CBS content has some value, but it's not enough to work as a stand-alone.

Daniel Kline has no position in any stocks mentioned. He is 41 and watches no shows on CBS. The Motley Fool recommends Netflix. The Motley Fool owns shares of Netflix. We Fools may not all hold the same opinions, but we all believe that considering a diverse range of insights makes us better investors. The Motley Fool has a disclosure policy.

Could Paramount Global Become the Next Netflix?