Shares of SodaStream have fallen by more than two-thirds over the past year. Here are three lessons investors can take away from the ordeal.

Shares of SodaStream (SODA), known for its home carbonation systems, have been decimated over the past year. After reaching a high of $64 per share last October, the stock had been cut in half by the beginning of this October. It then fell further, to around $20 per share, after the company warned earlier this month that its third quarter would be a disappointing one. 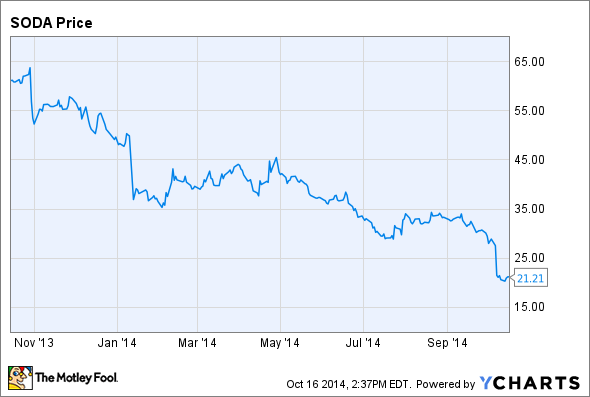 It's clear now that SodaStream is probably not the growth story that many investors believed it to be back when the stock was trading at more than three times the current price. Cracks began to emerge back in January, and I wrote then about some serious issues the company was facing, and it now appears those cracks have only grown larger. While an investment in the company made at peak prices is unlikely to be salvaged any time soon, a few important lessons can be gleaned from the SodaStream stock disaster.

Don't take management's word as gospel
It's often hard to tell whether a product will have staying power or peter out after a period of popularity. SodaStream does have history on its side, with the company being founded over 100 years ago, and its machines are extremely popular in certain European markets. In Sweden, for example, 20% of households owned a SodaStream as of 2010.

But the United States, which is the key to SodaStream's growth story, is an entirely different beast. SodaStream admitted in its recent warning that things have not been going as planned:

We are very disappointed in our recent performance. Our U.S. business underperformed due to lower than expected demand for our soda makers and flavors, which was the primary driver of the overall shortfall in the third quarter. While we were successful over the last few years in establishing a solid base of repeat users in the U.S., we have not succeeded in attracting new consumers to our home carbonation system at the rate we believe should be achieved.
-- CEO Daniel Birnbaum

Management's expectations turned out to be woefully out of touch with the actual demand for the company's products. The case laid out by the company in a presentation from March 2014, predicting 15% revenue growth this year while calling the margin pressures facing the company temporary, turned out to be completely wrong.

It's management's job to paint a rosy picture of a company's future, and it's an investor's job to determine how realistic that picture is. SodaStream is a perfect example of the troubles that can be caused by taking management's predictions as fact.

The product needs to make sense
There are three reasons a consumer might buy a product like a SodaStream machine:

On the first point, SodaStream machines don't offer much of a value proposition, if any, for consumers in the United States. The syrups required to make soda with the machines are priced as low as $5.99, with each syrup making about 12 liters of soda. Making the equivalent of a 2-liter bottle, then, requires about $1 worth of syrups. The machine also requires carbonators, which cost about $15 when exchanged with a used carbonator. The carbonator adds another $0.25 per liter, bringing the total cost per 2-liter bottle to $1.50. This doesn't even include the cost of actually buying the machine, with prices starting at around $70, and already it's right around the typical price of name-brand sodas like Coca-Cola, and significantly pricier than store-brand sodas.

In addition to not saving consumers money, SodaStream machines don't eliminate any inconveniences. Soda can easily be tacked onto a grocery trip, and the choice is between having soda already on-demand and taking the time to make it yourself. If anything, SodaStream machines actually create a new inconvenience, adding time to something that typically takes no time at all.

SodaStream's recent warning seems to point to novelty being a big driver of sales of the machines in the United States, and for a company that depends on syrup and carbonator sales for its business model to work, this doesn't bode well. Simply selling machines isn't enough; SodaStream needs to ensure that people continue to use them, and it seems the company hasn't been able to do that.

Before investing in any company that makes a consumer product like SodaStream, an evaluation of whether the product actually makes sense is crucial. Does it save consumers money? Does it eliminate an inconvenience? If it does neither of those things, it's probably best to avoid investing in the stock, especially when it's priced optimistically.

Don't get carried away with optimism
It's easy to come up with overly optimistic arguments for investing in SodaStream. Here are two examples:

These arguments sound great, but they ignore the issues with SodaStream mentioned above. Without a strong value proposition, the number of potential customers is severely limited.

SodaStream's revenue is stagnating at less than $600 million per year. The company has guided for just $125 million in revenue in the third quarter, a decline of nearly 14% year over year. Profits are also drying up, with operating income expected to be just $8.5 million in the third quarter, down from $18 million during the same period last year.

This is what happens when a product ends up being more novelty than anything else: an initial period of optimism, with strong sales growth, followed by the realization that the market for the product isn't nearly as large as first assumed. Can SodaStream return to growth? Sure, but it sells a niche product, not one that will be in every home in the country. Investors' expectations need to be reset, and the recent crash in the stock price appears to have done just that.

Is SodaStream Stock Punching Out Too Soon?
413%