PPG Industries has increased its dividend for the past 42 years, but is the stock a good value for dividend-seeking investors?

The nice thing about paintings and coatings company PPG Industries ( PPG 0.85% ) is that the stock offers something for growth- and income-seeking investors alike. One one hand, analysts expect the stock to grow its earnings in the mid-teens for the next couple of years. On the other, the company is a Dividend Aristocrat, having raised its payout for 42 years in a row. If you're an income investor, is now the time to buy into PPG Industries? Let's take a closer look.

A Dividend Aristocrat, but also a cyclical stock

The key to growing a dividend is a combination of generating good return on equity, or ROE, and having the earnings and free cash flow to reinvest in the business. In other words, companies need to generate good ROE (net income from shareholder equity) and then use whatever earnings are left over, after dividends have been paid, to reinvest so as to generate growth.

PPG has a strong average ROE, but its earnings tend to go up and down with the economy. Its ROE dipped dramatically during the last recession, because its revenue is heavily dependent on the industrial sector, which tends to be more cyclical than most sectors, and the construction market, which was heavily affected in the last recession. 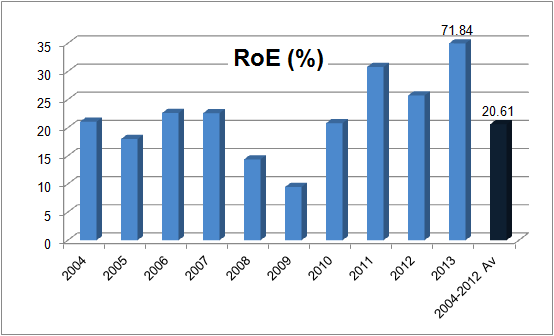 The large ROE in 2013 was due to proceeds from the divestiture of PPG's commodity chemicals business, so I've taken the 2004-2012 average as a better indicator of ROE. Using that average ROE of 20.61%, investors can calculate the stock's expected dividend growth rate using the Dividend Discount Model, also known as the Gordon Growth Model. It's a simple model for calculating g, the rate at which a company can grow its dividend, whereby:

Dividend cover during the cycle

Another key thing to look out for, particularly with a cyclical stock, is the company's ability to cover the dividend during the trough years. The following chart demonstrates that PPG's earnings didn't cover its dividend in the recession of 2009.

However, in truth, dividends are paid out of free cash flow (as the chart shows), and the company has proven it's able to convert earnings into free cash flow at a good rate. 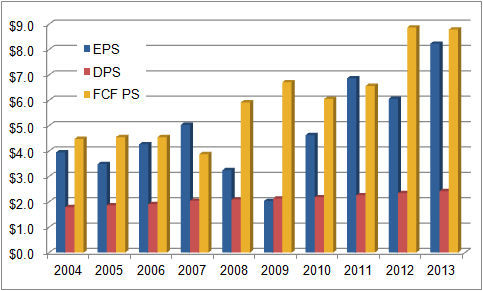 PPG was able to increase its free cash flow in 2008-2009 only by taking measures such as reducing inventories by $311 million in the period and decreasing receivables (money that customers owe the company) by $231 million. These reductions were equivalent to 25% of the free cash flow generated in those two years. In addition, capital expenditures were cut to 2.42% and 1.95% of sales in 2008 and 2009, respectively, from 3.15% in 2007.

If a company wants to get back to generating growth, it can't keep taking these measures forever. It can't keep running down inventories, not generating receivables (by selling products), or cutting capital expenditures indefinitely.

Will it still be a Dividend Aristocrat?

Whether PPG can retain its Aristocrat status depends on the industrial sector's potential to grow in future years. A quick look at its segmental revenue for 2013 reveals how PPG makes money. 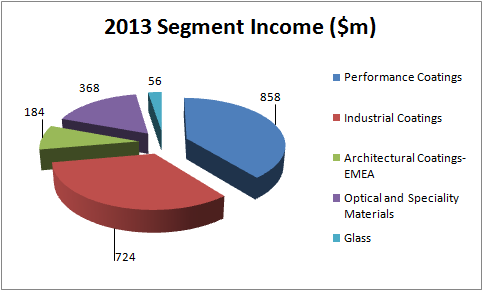 Of the first of the two major segments, the major end markets for performance coatings include aerospace, refinish (automotive and transportation), protective and marine coatings (ships, bridges, and rail cars), and architectural coatings in the Americas and Asia-Pacific region. Meanwhile, industrial coatings sells into the industrial, automotive, and packaging markets. The company has done well with its exposure to strong aerospace and automotive markets, and if construction markets come back, then its architectural coatings business could yet improve in 2014.

All told, PPG Industries has a current dividend yield of 1.4%, which isn't going to excite too many income seekers. Moreover, anyone buying the stock has to appreciate that the company is always going to carry some cyclical risk. Nevertheless, the company tends to generate good free cash flows, and it has the potential to increase its dividend significantly in future years. It also offers something for growth investors, because analysts expect its earnings to grow at 15% and 17.5% for the next two years, and its exposure to the aerospace, automotive, and construction markets in particular makes the stock attractive -- at least for more growth-oriented investors.