In the toy arena, Hasbro (HAS -0.10%) fights hard with rival Mattel (MAT -0.66%) and other toy makers to claim their share of spending from kids and their parents. Yet the share prices of those two iconic toy companies have diverged this year, and in its earnings report Monday morning, Hasbro once again showed that it's enjoying success that has at least temporarily left Mattel behind. Still, investors are uncertain whether Hasbro's recent edge will prove lasting, or whether Mattel will bounce back from its woes.

How Hasbro won in the third quarter
Hasbro's headline results reassured investors that the toy maker could overcome some of the headwinds that plagued Mattel during the same time period. Overall, third-quarter revenue rose by 7%, matching the $1.47 billion in sales that investors had expected to see despite a minimal hit from the impact of weaker foreign currencies. Adjusted net earnings came in at $187.8 million, or $1.46 per share, after accounting for a restructuring charge.

But the best news came from the relative success throughout Hasbro's different segments. All three of Hasbro's largest business units showed revenue gains during the quarter, with the boys division leading the charge with a 22% surge in sales. The girls toy business saw sales rise by 5%, and Hasbro's games division had revenue climb by 2%. Only Hasbro's preschool business lost ground, with a 7% drop reflecting weakness in its Sesame Street and Playskool lines of toys and other products.

The strong results in the boys category reflected the importance of Hasbro's licensing deals with Disney (DIS -0.01%), accentuating a trend toward cross-marketed toys based on movies and other video content that has been building for years. Growth in Hasbro's Nerf line helped contribute to gains for the category, but the company also cited products related to Marvel, Star Wars, and Transformers as responsible for growth in sales. Meanwhile, girls responded well to Hasbro's Nerf Rebelle line of toys, as well as its My Little Pony franchise. That stands in contrast to Mattel's recent troubles, which include sales declines for its iconic Barbie franchise as Mattel struggles to adapt to changing conditions especially as it will lose a key licensing deal with Disney within the next year or so.

From a geographical context, Hasbro is seeing better conditions abroad than in the U.S. and Canada. North American sales rose just 4%, sending operating profits up 16% from year-ago levels as strength in the boys and games categories outweighed declines in the girls and preschool categories. Internationally, the games category was the sole loser, with net revenue climbing 13% on a currency-adjusted basis. Latin America led the globe with 24% growth, but 11% higher sales in the Asia-Pacific region and even 7% growth in Europe showed Hasbro's ability to deal with areas facing much different macroeconomic conditions. Operating profits internationally rose by 10%.

Can Hasbro keep playing tough?
CEO Brian Goldner stressed how important brand development is to the company, specifically noting Hasbro's success in "forming a new strategic merchandising relationship with Disney Consumer Products for the globally popular Disney Princess and Frozen properties." Indeed, as the toy industry evolves, the discussion of Hasbro's results reflects the growing multimedia focus in toys, with Goldner acknowledging the company's momentum and the resulting "benefits of leading with compelling content and storytelling." 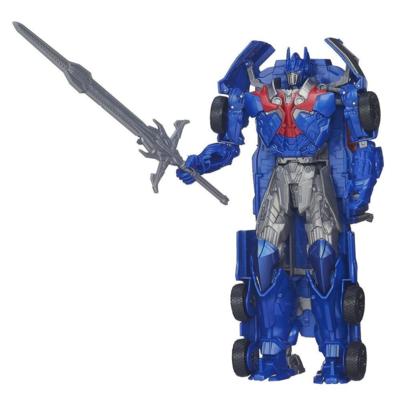 Hasbro's strategy reflects the growing trend in the industry away from traditional toys, where sales growth has come to a standstill according to the latest figures from the Toy Industry Association. The fact that children are buying fewer toys has hurt Mattel as well as toy retailer Toys R Us, but by keying in on the most popular products and aiming to link them to vast marketing campaigns from partners, Hasbro has made the most of what opportunities there are.

Going forward, Hasbro needs to keep playing to its strengths as it enters the holiday season. Currently, investors are counting on substantial growth in sales and earnings to keep driving the stock forward. With moves like its recent Hub Network joint venture with Discovery Communications, Hasbro could very well generate the interest it needs to make further progress -- as long as its content continues to match up with what customers want. Counting Mattel out is premature, but at least for now, Hasbro has a big edge in the toy game.