Stock in Jacobs Engineering has had a difficult year in 2014 as geopolitical concerns and restructuring charges have hurt earnings.

Shares in engineering consultant Jacobs Engineering Group (J 0.12%) have declined more than 26% this year, as of this writing. Such a result is hardly surprising, given that EPS guidance has been significantly lowered this year. At the start of the year, analysts were predicting 2014 EPS to reach $3.66, but today that forecast stands at $3.29. What happened to the company this year, and will this be an ongoing problem?

The company has been wrestling with two main issues this year:

Having announced a restructuring charge of around $0.40 per share for the second half at the time of its second-quarter results, management disappointed the market by taking a charge of $0.35 in the third quarter alone. Moreover, as Principal Financial Officer John Prosser said on the Q3 conference call, "We now are looking at a total restructuring cost of somewhere between $0.55 and $0.60 for the third and fourth quarter."

The issue of customer caution may prove more problematic. Prosser spoke of pricing pressures in the industry -- a sure sign of a slowdown -- and acknowledged that underlying operations weren't growing in line with the company's expectations at the start of the year. In particular, heavy process industries and the mining and mineral industries were cited as being under pricing pressure.

Furthermore, when asked whether the pricing pressures marked the end of a cycle, CEO Craig Martin replied:

I certainly don't see any evidence that the cycle is over. I do see an abundance of caution from our customers about the cycle and where they are in it and what the likely outcomes are for their projects. And I think that's actually turning this from sort of what I think we all believed a couple years ago was going to be boom-like into a much more protracted, less boom-like environment.

It's clear that things haven't turned out as they might have in the industry.

Most readers here already know how the construction and engineering industry works. Essentially, it's always been the case that engineering consultancies come under pricing pressure when the market turns down. Naturally, an engineering firm is not obligated to accept a contract with wafer-thin margins, but the reality is that holding pricing in a slowdown usually means a company will lose out on work.

In a sense, the industry is still struggling to get out of the sluggish growth mode that has beset it since the last recession. The proof is in the return on equity, or ROE, at Jacobs and some of the companies it names as its rivals, including URS Corporation, Fluor Corporation, and KBR, Inc. ROE is important because it tells an investor what a company is making in net income from shareholder equity invested.

Each company is currently generating a lower ROE than when entering 2008 -- and the change in Jacobs Engineering's ROE is significant. 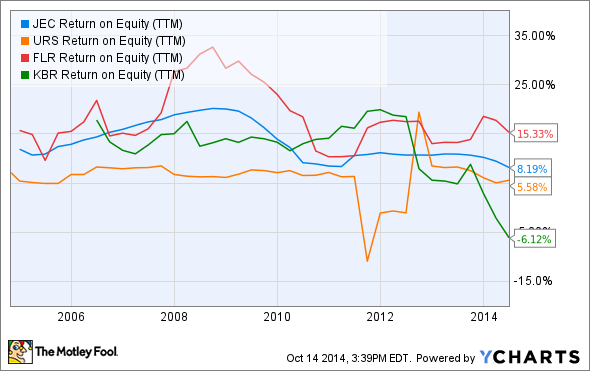 Where next for Jacobs Engineering?

It's not difficult to see why Jacobs Engineering has declined this year, but it's harder to see what will happen going forward. There's no doubt that geopolitical concerns have slowed infrastructural investment and caused caution among customers -- particularly in industries that require heavy capital spending commitments, such as oil and gas and chemicals processing. Moreover, the slowdown in emerging-markets growth has held back some heavy engineering activity, while also pressuring commodity prices.

Essentially, investors are going to need to see a resolution of some geopolitical risk, and a pickup in emerging market growth, before feeling completely comfortable with Jacobs Engineering and the sector as a whole.

Lee Samaha has no position in any stocks mentioned. The Motley Fool owns shares of Fluor. We Fools don't all hold the same opinions, but we all believe that considering a diverse range of insights makes us better investors. The Motley Fool has a disclosure policy.