Swedish industrial metals 3D printing company Arcam AB (NASDAQOTH: AMAVF) delivered a third-quarter earnings report on Friday that delighted investors, resulting in the stock soaring 33%. The stock held on to those gains yesterday, as it closed up barely in the green. Arcam, which sells its electron beam melting, or EBM, 3D printing systems to the orthopedic implant and aerospace markets, is always the first company in the volatile 3D printing sector to report quarterly earnings.

We're going to do a deep dive into Arcam's results. 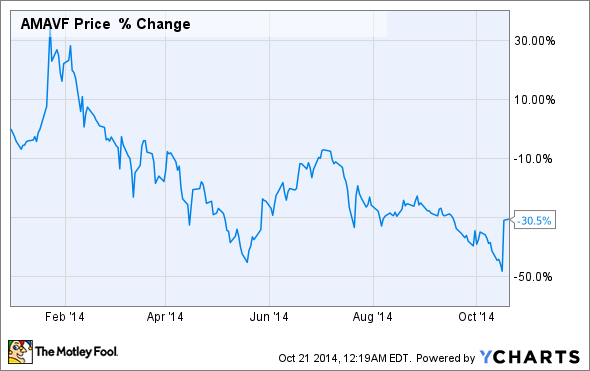 Despite its 33% jump, Arcam is still considerably off its 2014 high, due to the beating 3D printing stocks have taken this year. Data by YCharts.

(The Federal Reserve's exchange rate on Sept. 30 of 1 US dollar = 7.215 Swedish krona was used for the currency conversions.)

Performance drivers
The number of EBM systems delivered was obviously the key driver in the quarter, since the bulk of Arcam's revenue is generated from 3D printer sales. (The company just stopped providing the systems/materials revenue breakout because it doesn't believe there's a good way to break things out now due to the acquisitions.) However, that delivery number had even greater importance than usual this quarter. That's because there were delays in shipping several systems to customers last quarter. Though the reasons for the delays seemed good ones, it's now safe to say that last quarter's events were ones that are bound to occasionally occur, but not evidence of any systemic issues.

Rene stated on the conference call:

Growth [organic] in the quarter was fueled by strong systems sales; a good product mix where the average selling price was good; a good aftermarket, partly based on system deliveries, because with each delivered system we also deliver powder.

As for the product mix, the company's larger, more expensive Q20 system, launched last December, continues to sell well. The Q20 was specifically designed for series production of a wide range of aerospace components. Arcam's sales by end use continue to tilt more heavily toward aerospace, though Arcam doesn't break out the aerospace/medical implant mix.

The Q20 has been well received by aerospace customers. Source: Arcam.

Also, notably, Arcam sold its first Inconel system in the third quarter. In July, the company launched Inconel 718 as a qualified material for use in its 3D printers. Inconel is a key aerospace metal. However, as Rene noted on the call, it will be at least two years before the company sees any Inconel systems ordered for production, rather than research and development, applications. This is because there's a long validation process involved due to the critical nature of aerospace components.

Negative cash flow in the the quarter, but solid balance sheet
While it's my opinion that investors don't need to be concerned, it bears noting that both operating and free cash flow for the quarter were negative. The company is investing heavily in research and development and beefing up staffing, both of which affect operating cash flow. Its acquisition of DiSanto for cash affected FCF.

However, Arcam's balance sheet remains solid, with cash and cash equivalents of 249.5 million SEK, or about $34 million, and current liabilities of 176.6 million SEK, for a quick ratio of 1.4. And it has no long-term debt.

This chart for the two-year period clearly shows that Arcam appears to be in no danger of burning through its cash. (FCF has been hovering in a tight range between about negative $3 million and positive $3 million.) 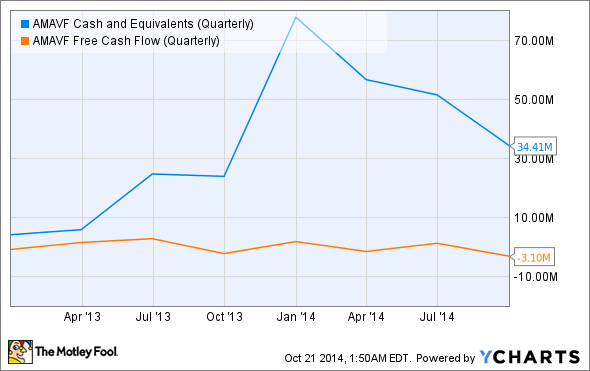 Arcam's results for year-to-date 2014
While Arcam posted great quarterly results, it's critical to view the company's performance through a wider time lens than just one quarter. This is a small company that sells relatively few pricey 3D printers each quarter, so quarterly revenue results can be very "lumpy," as a shifting of just one or two systems sales from one quarter to the next can make a big difference in year-over-year comparisons.

This phenomenon was at play in the Q2-Q3 period, due to the shipment delays previously discussed.

For a better picture of how Arcam is performing, here are key stats for the nine-month period from Jan. 1 through Sept. 30:

News that bodes well for Q4 (and beyond) -- A "volume" order
Arcam expects to receive a "volume order" – which Rene defined on the call as meaning five or more systems -- before the end of the year.

A single order for more than five systems would be good news regardless of the source, given the small number of systems Arcam sells (20 so far in 2014; 25 last year). However, it will be even better news if such an order is from General Electric (NYSE:GE), given the industrial giant's appetite for 3D printers is already voracious and will further ramp up.

There are two related Arcam-GE connections that seem to fly under the radar:

Guidance? Arcam doesn't provide quarterly or annual revenue or earnings projections, which is not uncommon for small companies selling relatively few numbers of expensive products. This is because the previously discussed "lumpiness" factor makes it very difficult to get an accurate handle on sales projections.

More forward-looking good news -- New digs on the horizon
In response to an analyst's question about capacity constraints, Rene said during the call that Arcam plans to move into a new building in "about a year." During this exchange we learned that Arcam currently has the capacity to produce an average of approximately one 3D printer per week, and the new building should have roughly three times the capacity.

No further details were provided.

What to Watch
Arcam turned in a strong quarterly earnings report and its outlook for growth remains positive. Arcam's patented EBM technology is proprietary, so if customers want an EBM system, they have one choice as to the supplier.

On the flip side, the biggest risk factor for the company and its stock is that Arcam has all its eggs in one technology basket, as EBM is its sole tech. However, I don't think investors need to concern themselves much with this. The EBM story is looking electron-beam bright, and Arcam continues to invest in research and development.

As I've said in previous quarters, the key thing for investors to keep their eyes on is the order intake numbers -- but over a longer term than one quarter. Don't get bogged down with deliveries, as they'll eventually occur as long as orders roll in.

Potential investors need to keep in mind that 3D printing stocks are highly volatile. More specifically, Arcam's stock is extremely thinly traded, making it especially volatile and easily manipulated. Also, be aware that the stock is not as easy to follow as one listed on a major U.S. exchange.