Amazon.com has been a great stock for investors since the day of its IPO, but its future trajectory is unclear.

Amazon.com (AMZN -7.85%) has been a big winner for investors since going public in 1997. Yet the past year has not been kind to Amazon investors, as the stock has badly lagged the broader market. Shares ended last week 25% below the all-time high reached in early 2014. 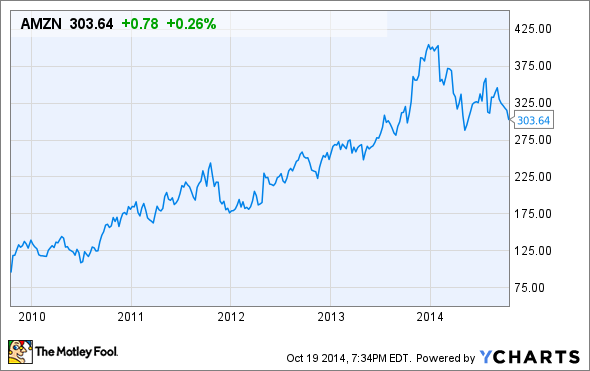 Investors looking at Amazon must weigh its strong revenue growth -- sales will likely eclipse $100 billion next year -- against its low profit margin. For long-term investors with faith in founder and CEO Jeff Bezos, the pullback in Amazon shares this year provides a good entry point. That said, Amazon's ultimate profit potential is unclear, making its stock a highly speculative investment.

Sky-high valuation
Amazon has had a high valuation for virtually its entire history as a public company. For much of the period between 2005 and 2011, the stock had a "center of gravity" between 50 and 70 times trailing earnings. While it occasionally spiked lower or higher, it usually returned to that valuation range within a year or so. 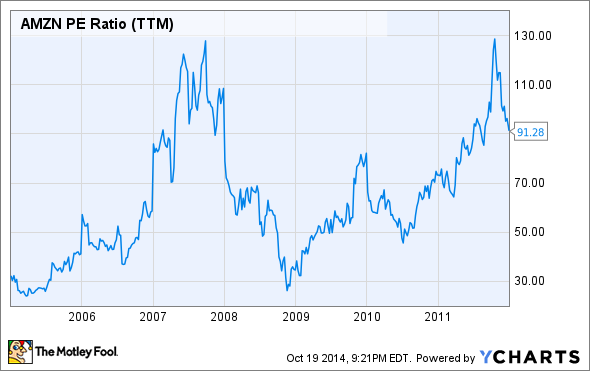 More recently, Amazon's earnings multiple has soared because the company's earnings have fallen. Amazon's net income peaked at $1.15 billion in 2010. Since then, heavy investments have diluted its earnings power. Over the last four reported quarters, Amazon cited net income of just $181 million.

As a result, the stock now trades for nearly 800 times trailing earnings. Furthermore, Amazon projected in July that its third-quarter operating loss would balloon from $25 million in 2013 to $410 million-$810 million this year. While Amazon usually lowballs its earnings forecast, analysts still expect it to post a big loss for the quarter and roughly breakeven results for the full year.

Since Amazon's profitability is depressed by a variety of growth investments, its sales multiple might be a better valuation metric. Amazon currently trades for 1.7 times sales. It is much cheaper by that metric than most growth companies. However, it is still quite expensive compared to fellow mass retailers Costco and Wal-Mart, which each trade for 0.5 times sales.

Is growth slowing?
A critical question for potential Amazon investors is how fast the company can grow revenue in the next few years. Year-over-year revenue growth has slowed from more than 40% as recently as 2011 to a little more than 20% for the past year. Is the new pace sustainable, or is revenue growth permanently slowing? 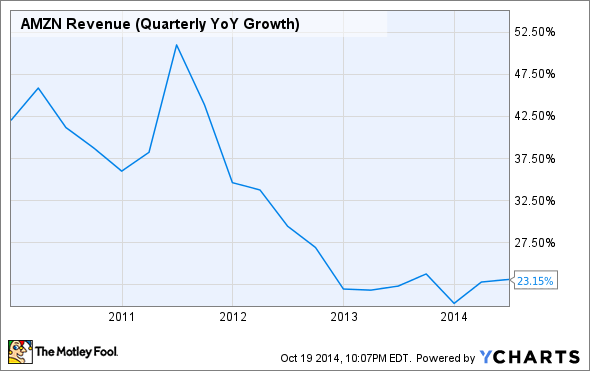 On the positive side, e-commerce is still young. In the U.S., e-commerce currently accounts for about 6.4% of total retail sales -- but that percentage has been growing steadily. This continued rise should drive long-term growth for Amazon.

That said, market saturation is a significant concern, given Amazon's size. Wal-Mart grew revenue by 30%-40% annually when it was smaller, but its growth has slowed bit by bit in the past three decades, falling to less than 5% in recent years. 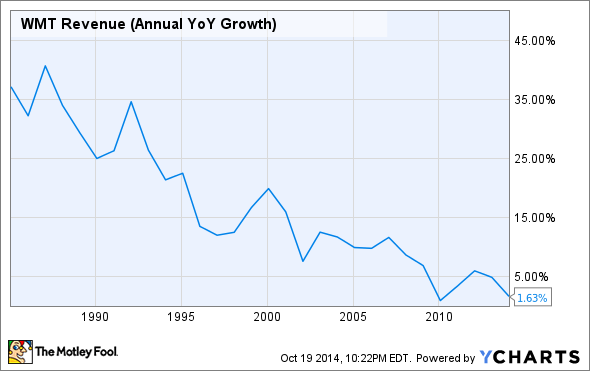 Food is one of the few remaining categories big enough to provide a major growth opportunity for Amazon. The food retail market is nearly $1 trillion in the U.S. alone. Not surprisingly, grocery sales make up a big proportion of total sales at Wal-Mart and Costco. Yet e-commerce has not caught on in the food business (especially for fresh food), so it's unclear whether Amazon can succeed in this market.

The margin wild card
Even if Amazon can't maintain a 20% revenue growth rate much longer, it should be able to add $15 billion-$20 billion to its top line annually for years to come. Food is a key potential growth area, but Amazon can also grow by gaining market share in many other retail categories. The Amazon Web Services cloud computing business also has huge growth potential.

Ultimately, Amazon's value depends on whether the company can rebuild its margins. Amazon bulls trust that Bezos has a long-term plan to leverage the company's investments in numerous areas into significantly higher profits down the road.

However, from a bear's perspective, these "investments" look more like the pursuit of growth for growth's sake. Amazon has continuously added product categories in recent years. However, some of its moves -- like the introduction of the Fire Phone, Amazon's first smartphone -- seem dubious at best.

If you are confident the company will eventually return to a high single-digit pre-tax margin, the stock looks attractive at $300 due to Amazon's solid revenue growth and relatively modest price-to-sales ratio. However, I think it's more likely that -- like Costco -- Amazon will maintain a low single-digit pre-tax margin in the long run. In that case, the stock is still overvalued.