Proto Labs (PRLB -0.45%) reported its third-quarter earnings  today. The market did not like what it saw, as the company's shares have crashed by 20% at the time of this writing. Was this reaction justified? Here are the key numbers:

Let's dig a little deeper into these numbers, particularly in light of the fact that Proto Labs missed Wall Street's expectations for both revenue (consensus of $55.7 million) and EPS (consensus of $0.47).

Revenue growth: a familiar pattern
Proto Labs' revenue has grown at a rate of 20% to 35% a quarter on a year-over-year basis since the first quarter of 2012. The latest quarter is a little closer to the high end than the low end of that range, but it's still only the third-best growth rate of the past four quarters. A 30% growth rate would be cause for celebration at most companies, but Wall Street wanted just a little bit more: 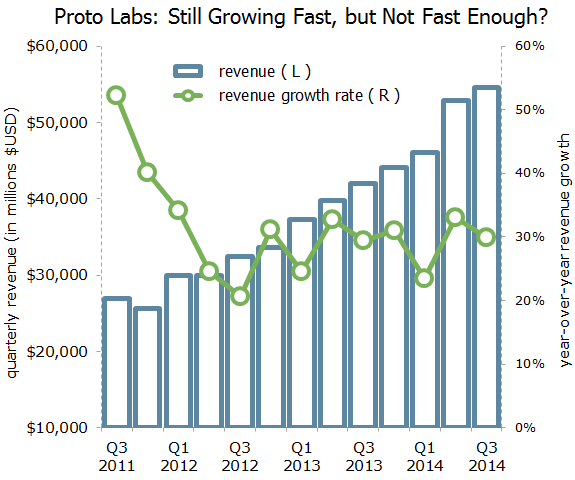 Proto Labs CEO Vicki Holt highlighted weakness in the company's European markets as a major reason why revenue didn't grow as quickly as expected -- European revenue was essentially flat before adding in revenue from the company's new 3-D printing  Fineline segment, while North American sales were up 26% ex-Fineline. That doesn't fully explain why Proto Labs missed its EPS target, but we can find at least part of the cause by looking closer at Proto Labs' spending.

R&D spending on the rise
Proto Labs has generally been very disciplined about its R&D spending, and this cost was still close to the company's historical norms during the third quarter. However, keen-eyed earnings statement investigators will still take note of the fact that Proto Labs spent more on R&D as a percentage of its revenue during the third quarter than it ever has before, and it's likely not a coincidence that this uptick in spending coincided with a drop in the company's net margin: 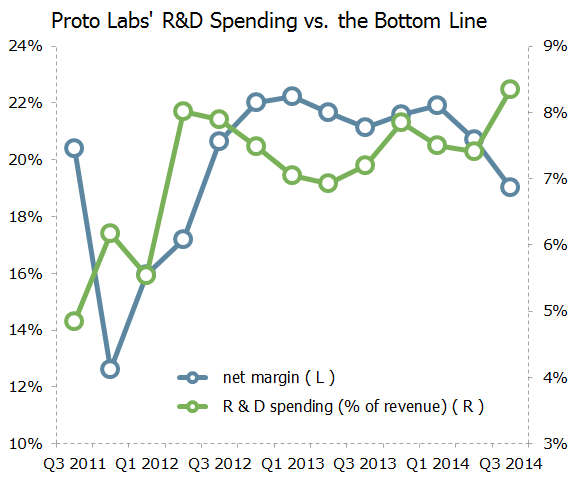 This spending was highlighted in Proto Labs' earnings report because the company is including "integration activities related to Fineline" in R&D spending. The company's efforts to scale up its Protoworks accelerated-manufacturing initiative  also fits in this spending category, as it should, and Holt believes that it should begin paying off in 2015. There's nothing especially unusual about this level of R&D spending, so investors should remain confident in Proto Labs' ability to form a better future without sacrificing too much of its present potential.

One area of minor concern in today's report is Proto Labs' unique developer metric, which has now grown by less than 20% year-over-year for three consecutive quarters after always managing to top 20% year-over-year growth before. 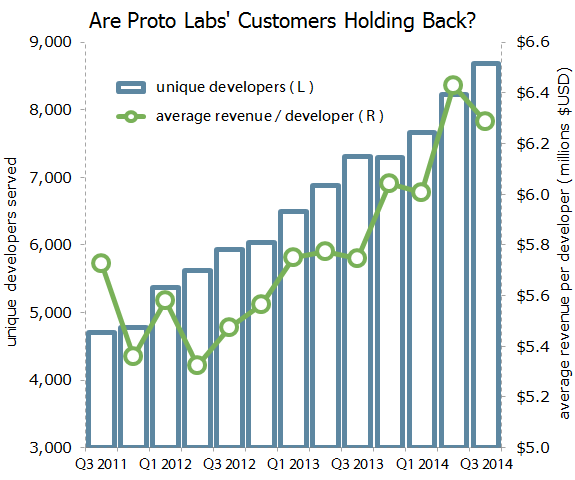 It's worth keeping in mind that while these results might not have met expectations, there's nothing inherently bad about them -- 19% year-over-year growth in customers, paired with a 9% year-over-year improvement in per-customer spending, still represents good momentum for a small company in a highly specific niche. The market has punished Proto Labs for missing Wall Street's expectations with a 20% drop in share prices this morning, but the company appears to be moving in the right direction, and investors should keep a long-term view when it comes to results like today's.