Please ensure Javascript is enabled for purposes of website accessibility
Log In Help Join The Motley Fool
Free Article Join Over 1 Million Premium Members And Get More In-Depth Stock Guidance and Research
By Matthew Frankel, CFP® - Oct 24, 2014 at 8:35AM

Unlike many of the other bank stocks in Berkshire Hathaway's portfolio, Buffett bought U.S. Bancorp before the financial crisis. Why?

Warren Buffett's Berkshire Hathaway (BRK.A -0.27%) (BRK.B -0.14%) has done a great job of scooping up excellent bank stocks over the past several years, and one of the company's biggest bank holdings is U.S. Bancorp (USB -0.67%). As of Berkshire's latest SEC filing, the company owns just over 80 million shares of the bank, which represents about 4.4% of the total.

It's easy to understand why Buffett has been a fan of the banking sector over the past several years. After all, valuations plummeted to all-time lows in many cases, and Buffett loves good companies at low prices. However, Buffett has owned shares of U.S. Bancorp since before the financial crisis and has been adding to his position ever since, in both good economic times and bad.

So, why in particular did he choose U.S. Bancorp, and why is he still holding on and adding to his position?

First, does the company have a "wide moat," or a distinct competitive advantage? For example, some pharmaceutical and tech companies have lots of valuable patents that keep competitors from luring their customers away (such as Pfizer). And some companies use economies of scale to maintain pricing power over their competitors (like Wal-Mart and Amazon.com).

Also, Buffett likes to invest in industries that have been around for 100 years and are likely to be around 100 years from now. People will always need healthcare, food, and safe places to put their money, which is why Buffett owns stocks like Johnson & Johnson, Coca-Cola, and Wells Fargo. Will people need things like tablet computers in 100 years? Maybe, but maybe not.

Why U.S. Bancorp?
U.S. Bancorp is somewhat of a rarity among Berkshire's bank holdings because Berkshire bought shares of the bank before the financial crisis. In fact, about 17 million shares were purchased in early 2007, one of the absolute worst times to buy bank stocks. So, why did Buffett like the bank back then?

At first glance, U.S. Bancorp actually looks rather expensive. The company's price-to-tangible book value ratio of 2.85 is well above most of its peers and the other Buffett bank stocks. It's even more "expensive" than Wells Fargo, which is considered one of the most rock-solid banks out there. 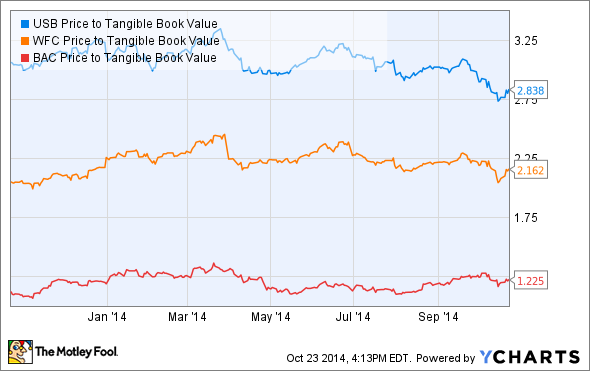 However, Buffett doesn't need his stocks to be cheap. He just needs fair prices on good companies. And, U.S. Bancorp is definitely a very well-run company. Not only is it one of the most profitable banks in the industry, but it continues to grow at a pretty impressive pace. In the company's recently released third-quarter results, we learned that the company produced year-over-year loan growth of 6.3%, deposit growth of 7.4%, and has 3.7% fewer charge-offs than in the previous quarter.

And, the bank produces sector-leading efficiency numbers, with a return on average assets of 1.51%, a return on equity of 14.5%, and an efficiency ratio of 52.4%. For comparison, Wells Fargo's efficiency ratio was 57.7% in the third quarter (lower is better), and the company's return on assets and equity were 1.40% and 13.1%, respectively.

It's definitely a solid company, but is it still a good buy?
The company certainly isn't cheap, but that doesn't necessarily mean it's not a good value. If you want to invest in U.S. Bancorp, do what Buffett likes to do from time to time: Wait until the stock drops for a reason that has nothing to do with its business, like an overall market correction, or general weakness in the financial sector. 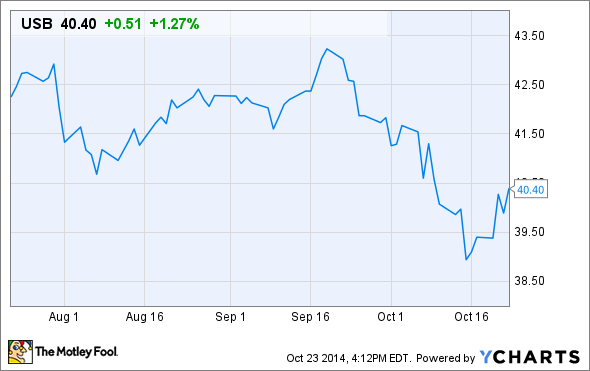 In fact, U.S. Bancorp actually looks like it is somewhat "on sale" right now, thanks to the recent market sell-off, currently trading for about 6% less than it was about a month ago.