Please ensure Javascript is enabled for purposes of website accessibility
Log In Help Join The Motley Fool
Free Article Join Over 1 Million Premium Members And Get More In-Depth Stock Guidance and Research
By Anders Bylund - Oct 26, 2014 at 11:02AM

Google and Tesla (and most of Detroit, actually) want to put self-driving cars on public roads. What will it take to make these vehicles legal?

Musk's careful forecast raises the question: If Google can drive a car without human intervention today, then why should we have to wait another nine years before these vehicles hit the mainstream?

The answer is part technical and part economical -- but above all else, the legal framework just isn't ready for driverless cars yet.

Where are self-driving cars headed?
Let's start with Elon Musk himself.

When he announced the new autopilot features for his Tesla Model S cars, he noted that it's an early swing at a very difficult problem. Musk expects that in five or six years, autopilot systems will drive better and more safely than human drivers.

But it isn't enough to match or slightly beat the human driver.

"I want to make sure that it's truly a lot safer than driving with a person," Musk said. "The standard for fully autonomous driving is going to be much greater than for a person, because if it's just equivalent that won't be enough."

And only then will lawmakers even begin to consider granting special driver's licenses for autopilot systems. In Musk's view, it'll take another two or three years before the slow wheels of justice have turned all the way through, letting Tesla and others sell truly automatic vehicles to the general public.

Who makes the rules?
The American traffic system is managed state by state. There is no federal Department of Motor Vehicles, and via the Federal Highway Administration, the Department of Transportation only provides official guidance to each state's legislative system. The DOT's role is to provide "leadership, consultation, and cooperation" resources for the national transportation system.

So it's up to each state to set its own rules, but there's a larger system available to guide these efforts in the same general direction. For example, New Yorkers have been driving (horse buggies, at first) on the right-hand side since 1804, but New Jersey converted from left-hand traffic in 1813 and Massachusetts dragged its feet on this issue until 1821. Today, we're not likely to see any state going maverick and switching to left-hand-side driving.

But each state could technically do that, if the local government could pass the required state laws. The FHWA and the National Committee on Uniform Traffic Control Devices may not wield legislative powers, but their word weighs heavy in the national and local debates on new driving laws.

Are we there yet?
The fragmented nature of the American traffic system is what allowed Google to start its self-piloted tests on a small scale. The online search giant lobbied lawmakers in Nevada to allow computer-operated vehicles on public roads. In June 2011, Nevada's governor signed Google-supported bills into law, opening the door for cars on autopilot -- in officially designated testing areas and with strict safety protocols in place.

Since then, autopilot supporters have introduced bills in 22 states and in the District of Columbia. Self-driving cars are now allowed in Nevada, Florida, Michigan, California, and the District, at least for testing purposes. States like Texas, Arizona, New Hampshire, and Wisconsin have rejected autonomous car laws, and many states are considering their options right now.

Stanford University's Center for Internet and Society keeps a record of each state's self-driving legislation efforts. To keep up with the latest news, that's the first place I'd look. Here's what Stanford's map of current legislation looks like right now: 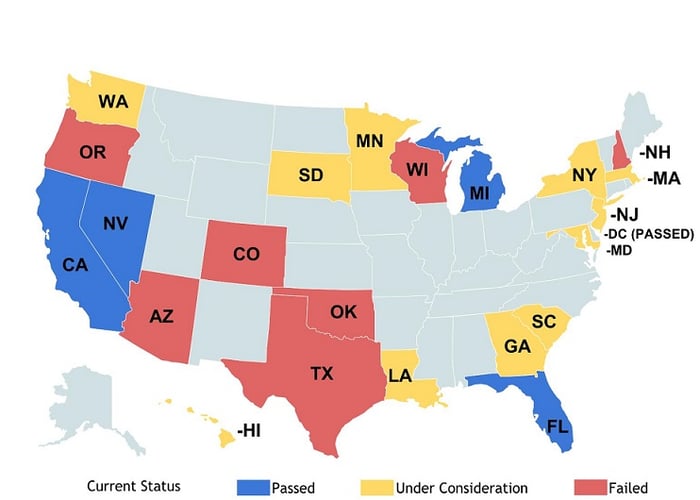 What's next?
So far, there is no official recommendation from the FHWA or the NCUTLO, leaving the states to set their own parameters.

Before Google, Tesla, and other automakers with self-driving ambitions can drive home a uniform legal autopilot framework across the nation, they must first convince these policy-setting bodies.

And to get there, tests performed in the early-adopter states must show that autonomous driving can indeed save lives, help the environment, and make the highways safer overall. That's where the self-driving agenda stands today, as Google and friends work to develop self-driving systems that will pass these tests with flying colors -- under real-world driving conditions.

Even after the driving rules of each state have been modified to allow machine-operated vehicles on public roads, there will be a battle for the hearts and minds of Americans who simply love to put their hands on the wheel and pedal to the metal. That might be the most difficult part of the whole process.

So we're a long way away from self-driving cars on every American road. Elon Musk's decade-long time frame looks about right.

And I can't wait to get there. How about you? Share your thoughts on self-driving cars in the comments box below.